So i've ordered a load of kits and am more than comfortable with soldering and building from Kit however...
I would really like to start understanding the electronics behind what i'm building.
I work in pro audio and know very very basic stuff about that but can you recommend any books for beginners?

I'n the long run i'd like to start building myself basic euro modules but for now just an understanding of circuitry would be great.

books would be great, i hate reading website guides etc...
Like a good evening read and something i can sit on my workbench.

The Art of Electronics


The best self-teaching book and reference book in electronics Ã¢â‚¬Â¦ The beauty and fun of electronics shows through.' Radio Communication

'Full of clever circuits and sharp insights, but with a surprising minimum of mathematics Ã¢â‚¬Â¦ The depth is genuine, as is the richness of examples, data and apt tricks.' Scientific American

'Far and away the finest book on the subject of electronics Ã¢â‚¬Â¦ in the last decade. I cannot recommend this book highly enough to anyone whose research or experiments require some electronics.' Optical Engineering

'Another electronics textbook that became an international best-seller Ã¢â‚¬Â¦ the book is renowned for presenting the techniques that circuit designers actually use.' IEEE Spectrum

A Practical Introduction to Electronic Circuits

I started with the poor
the rich is superb though.
Yes both out of date but it's the place to start...
then get up to date later

That's perfect, exactly what i am looking for.
Price is ok even for the most expensive.
I've spent serious money on acoustics reference book before now.

Only further question would be if there are any that deal primarily with the kind of circuits present in synth, maybe with reference to classic VCO/Filter designs etc?
Top

This gets covered fairly often, have a search.

If you are starting, forget about art of electronics, get:

Getting Started in Electronics by Forrest Mimms


If you wanna stuff related to music instruments, get the Electronotes Pack, but first read the books above.

edit: if you buy any, he'll likely send you all of it.
www.supersynthesis.com
Top 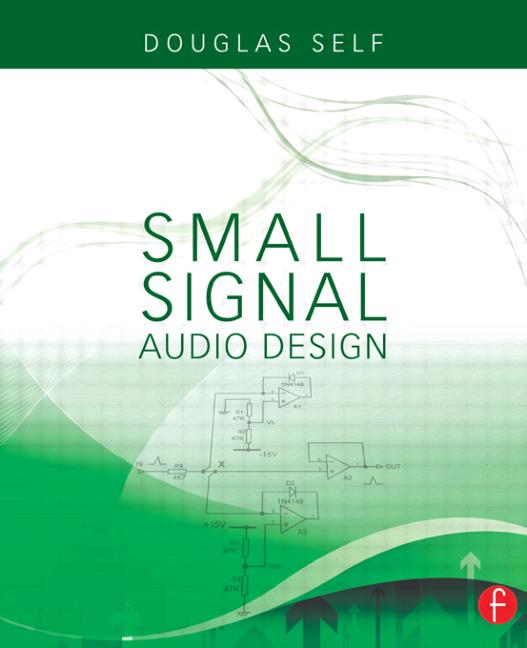 Particularly if you are in the pro audio field as he covers mixing desk design in some chapters. The initial few chapters (where you might expect introductory fluff) are particularly valuable. Strongly recommended. I got this for Xmas and read it in a couple of days.

You can see a chapter listing here.
ondes | current rack

I am afraid a firmware change will not be able to turn a rather expensive 16-bit DAC into a 16-bit ADC, and flip all those op-amps

A good book that covers a lot of op-amp theory and applications is "Design with Operational Amplifiers and Analog Integrated Circuits" by Sergio Franco:

Hunt around for earlier editions to save the pennies

And yes, that is the same Franco who devised the "Franco Compensation" used in sawtooth VCOs. And built an analogue synthesizer for his PhD.

love you all...
my bank doesnt though

check out prices on Abebooks.co.uk instead of amazon...

just got that Franco book in hardcover for Ã‚Â£5 including postage.
http://www.aether-machine.com
Top

How about Tremaine's "Audio Cyclopedia"? It's more valve based and old fashioned, but deals really well with some of the really fundamental principles.
Top

just got that Franco book in hardcover for Ã‚Â£5 including postage.

Nice one! You'll find some of the worked examples quite applicable, for example in the section talking about log and expo conversion 8_)

Nah, sorry, busy enough with family, then there's the Cambridge event mid-February, and the big weekend in August.

I just recently purchased a book that's aimed at etching yourself electrics. Although it isn't focused mainly on audio. it does had chapters on them, and it briefly goes into some acoustics stuff. I'd recommend it because it goes into depth on the components used in audio electrics. If you're interested the ISBN is: 978-0-07-145933-4
Call me Abby
I make music... Sort of...
Top

This thread is invaluable, I love you all!

Lately I'm working through the first four volumes of Modular Series on Solid State Devices. I found the BJT volume randomly and quickly ordered the other three. Very fundamental stuff.

My go to for higher level stuff like "why is this a filter" is currently Fundamentals of Operational Amplifiers and Linear Integrated Circuits by Berlin and Getz. That's the same Berlin who revised some of Lancaster's work.

All five are available cheaply on abebooks (in the US at least).


I love these threads. Thanks for the suggestions!
Top

Good recommendations here. I have the Doug Self book, the two Don Lancaster ones and the Horowitz one.

Another classic is the IC Op Amp cookbook by Walter Jung.

There is an old one called "Musical Applications of Microprocessors" which is a bit dated but still very interesting. It would be perfect if you had been hired in the 80's by Sequential Circuits to design the Prophet 5.
Top

just got that Franco book in hardcover for ÃƒÂ¯Ã‚Â¿Ã‚Â½5 including postage.

Thanks for this hint, slow_riot! I just ordered a copy plus the two volumes
of "Handbuch der Tonstudiotechnik" (older issues) I always wanted to buy but never actually ordered at Amazon because the price seemed prohibitive to me.