The DN-34 Analogue Time Processor effect was made by Klark Teknik in the late 1970s. It features two channels of analogue delay each capable of creating a delay from around 1mS to around 27mS. The delay time could be controlled from a front panel pot, an internal LFO with sine, triangle and square waveforms, and an external control voltage (CV). The two delays could be operated in series to give one longer delay or in parallel to create interesting effects such as through zero flanging. What was particularly good about the DN-34 was the very good sound quality available from the unit. Most BBD devices tend to be noisy and have limited bandwidth but the DN-34 excelled in both these areas.

Each delay channel was made from eight SAD512D bucket brigade delay (BBD) chips. These devices are very difficult to source today and when you can get them they can be very expensive. This Oakley Sound module is designed to replace one channel of the DN-34 which replaces eight of these ultra rare SAD512D chips and their ancillary circuitry with near identical performance. It is, of course, possible to use two of these modules to replace both channels and saving the need for sixteen SAD512D.

The sound when using the replacement board is almost identical to the original circuitry - the only small difference is a slight loss of gain when the delay time is very small. In practice this makes little difference, if any, to the effect heard, even when using the device in self oscillating mode or very resonant flanging. 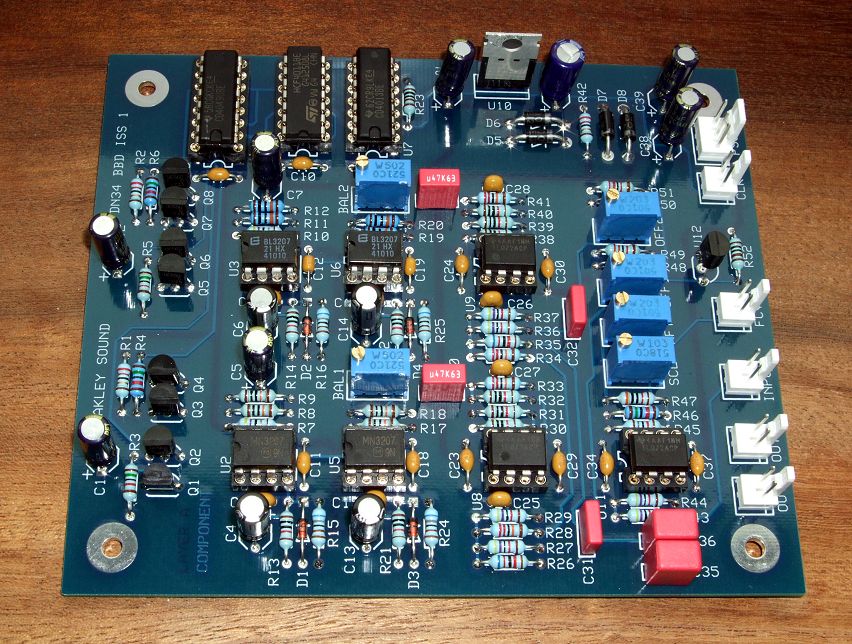 I have a very limited number of boards available right now but I'll probably get some more in later in the year.

More details about the product and how to order at my site:

The preliminary Builder's Guide is up already but I'll have full installation and calibration details available within the next week.

i had a Loft rack mount delay from the same time period & a flanger pedal with those Reticon "SAD" chips. ugh!!

both were broken & useless.

wish i had your know how.