Looks slick! Ordered the unpowered one, will stick a µZeus in it with a stick board. Sad that you don't get the logo lighting up on the unpowered one (they could have just left the 2 wires exposed or something).

Haven't quite decided which modules I'll stick in it, but I might have to order some extra square nuts, as 20 might be a bit short for 104HP if I put a lot of the smaller HP modules.
Top

That's a nice price as well.

Oh dang i may just jump inside the eurorack bandwagon.
The pricetag is crazy and it looks really good
Top Looks nice. I'd feel bad for just having bought a Monorocket 3U if this had a lid. Interesting how most of the newer cases are made of metal - I'm sure that's easier to produce at scale than tolex over plywood, or walnut. Lighter, too.
soundcloud
Top

Soooo they are saying that Tony Rolando INVENTED the skiff?
Top

I read "designed", not "invented"
Top

If I had waited a week I would have gotten this instead of my Pittsburgh. I guess I could always use another case...
Top

Clever design! Is it "unibody"/diecast?
Top

Unibody: pretty sure the fact that the ends are held on by screws means it's not unibody.

Diecast: highly higly doubt it... Die-casting is really really really expensive to create the dies so unless you're producing millions and millions of units, you'll only lose (lots of) money. Plus the case looks like sheet metal, like the Pittsburgh Cell cases.

Mechanical engineer here... I could keep going with reasons they (and anyone) would be insane to diecast a modular case...
Top

shreeswifty wrote:Soooo they are saying that Tony Rolando INVENTED the skiff?

Well, gokies made the first make noise skiffs, and if legend is correct...coined the term skiff as a play on the term boats. Before then, most modules were not so thin, as smd was not the norm. These skiffs became a standard of sorts and thus unity spread though out the land.
Top

anyone know what the Universal Power Supply they use is? Every laptop style Power Supply I've tried with modular cases has had no grounding resulting in either live-to-the-touch faceplates or ground hum or both. (UK)
Top

these look gorgeous. love the black metallic feel. hope they will also make a 6U version sometime.


also, ideally, a regular and a deeper version (for things like am synth, oakley and evergrowing selection of thruhole DIY modules - 8cm typical).
Top

Wow, what a fantastic answer to Moog's new offerings. Gonna have to do some maths (teehee) now to see what would really suit my needs best.
Top

Is $250 the price with power? If so that is a great deal.
http://www.mysticcircuits.com/
Top

I guess you can add a cable with more connectors but that's a good way to lose depth in the case.

oh man, this looks sexy with a very nice price, I can't wait to fill up my rack so I can get this

a 6U would be totally cool, and with a bit of tweaking it can be turned into a foldable 12U...
i've blown a fuse...

shreeswifty wrote:Soooo they are saying that Tony Rolando INVENTED the skiff?

Well, gokies made the first make noise skiffs, and if legend is correct...coined the term skiff as a play on the term boats. Before then, most modules were not so thin, as smd was not the norm. These skiffs became a standard of sorts and thus unity spread though out the land.

Actually Goikes did not make the first Make Noise Skiffs. The first units were made by a small woodshop in western North Carolina.

This time of the year in 2009 I was looking for a good way to show the forthcoming René, Pressure Points and BRAINS at NAMM 2010. Many people were using the Doepfer P6 case, and while it was a great case (esp. after they increased the power from 600mA to 1200mA), it was not a very ergonomic case for utilizing the René and Pressure Points. I wanted a small single row case that could set in front of the Doepfer P6 without obscuring any of the modules installed into the P6. I could not find anything that fit this description. Most modules were still pretty deep at that time, so even the Goike Boats would have been too tall to put in front of a P6. So I designed an enclosure specifically for the 1 x René, 1 x BRAINS and 2 x Pressure Points. Because these modules were very thin, I was able to set the height of the enclosure so it would set nicely right in front of a P6. Because the enclosure was designed to be used only with these 3 modules and these modules consumed less then 150mA, I made the DIN Power, which connected to the Doepfer P6 to siphon power and ground from it.

When the whole thing was set up, the little enclosure tied to the larger Doepfer P6 reminded me of a Skiff tied to the mothership, and since Serge and Buchla had always referred to their enclosures as "boats" I thought it would be funny to this enclosure I had made "Skiff" and so I did.

I made 20 units right after the Namm show. It took forever because the woodshop I hired was run by a guy with some bad habits. It took them over 3 months to get them half finished all the while my dealers, Analogue Haven and Schneiders Buero (the only show carrying eurorack at the time), where getting upset about the delays and so I had to go to the shop and commandeer the unfinished Skiffs against his will, and I then took them to a good friend who finished them for me in 3 days

a photo of the original Skiff. 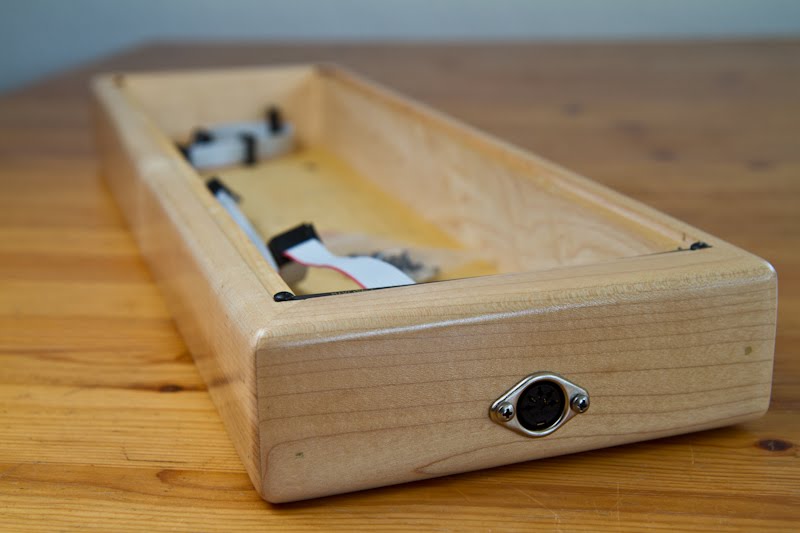 That same year Goike introduced himself to me wanting to trade a René for a bamboo prototype of his 15U (not sure if he ever produced a bamboo version aside from this one). Once I got to know him I figured he could do a MUCH better job of producing a Skiff for Make Noise, and so I had him make a few runs of a very gorgeous fine wood Skiff. I attached a photo. You could see the rounder more attractive look of the Goike made Make Noise Skiff in the photo below.

The point of this long post though is TO EXPLAIN that the Skiff was never meant to hold anything more then René Pressure Points and BRAINS, but once people got them, they wanted to put EVERYTHING in them because they were small and simple, and so folks started producing thinner modules and skiffs because that is what the many of the eurorack modular synth community wanted.

It is pretty amazing how quickly the modular synth industry, esp. eurorack, develops to feed the inspiration of the community using the instruments!
Top

Thanks for clarifying! I was almost right. Cool story and a great way of showing how synergistic this movement is. Where there different runs of the goikes skiff as I have two and one seems slightly thinner and a bit more round?
Top

Matos wrote:Thanks for clarifying! I was almost right. Cool story and a great way of showing how synergistic this movement is. Where there different runs of the goikes skiff as I have two and one seems slightly thinner and a bit more round?

Oh yeah you got the important idea. I just did not want anybody to think I'm trying to steal Goike's thunder

Goike was making Boats. I made a Skiff and then what happened is that the two combined into a Skiff with an outboard motor!

When we produce something, a module, a case, a cable whatever, we don't have control over how it is used. We wish we did! It would make designing these things much easier!

I tried hard to convince people that it was not a good idea to put a MATHS or a Malekko Anti-Oscillator into those Skiffs Goike made for us... but people did it anyhow haha...

Goike was putting full on power supplies into his boats, and as customers demanded it those boats shrunk in size to match the trend in module depth.

All of this happened in 5 yrs. You take a look at eurorack just 6 yrs ago, and the form factor was quite different then it is now.
Top
Post Reply
157 posts