Anyone replace or supplement a Renee v2 with Black Sequencer?

Anyone replace or supplement a Renee v2 with Black Sequencer?

I currently have a Renee v2 as the main sequencer in my system pictured below (incoming Beads will replace Echophon). I think Renee is an ingenious sequencer that does some incredible things. I'm not sure I've completely gotten on with it though. In particular, I just never became fast at creating melodies or pitch sets within a state or at recalling saved states to change among those melodies in real time (e.g., in different sections of a composition). In addition, I don't like how when changing snake patterns it inserts the first note between clock cycles (sounds like a glitch unless it's a really slow temp so I can hit it perfectly or a really fast tempo so it's not as noticeable). I feel like I mess around with Renee a lot and find wonderful happy accidents, but there's a lot of stuff in between.

So I'm contemplating going to a more traditional sequencer where melodies etc. are displayed right in front of you. Much as I dislike screens (yes including Shapey, it's my one exception and I struggle with it), the new Erica Synths Black Sequencer is basically at the top of that list, as it seems the objective was deep but simple and intuitive, and I like the demos I've watched (seems like I could be off and running in 5 minutes). It's obviously a completely different approach to sequencing -- it simply does exactly what you tell it to do (unless you tell it to do magic, and even then it shows you the magic) -- than Renee, so I'm not suggesting they're substitutes. But I'm wondering if anyone else gave a Renee a go, found it a bit opaque, and then either overcame that and got on with Renee or made the switch to a more straight ahead (i.e., non-Cartesian) sequencer.

Or both... If I do get a Black Sequencer, I obviously don't have to sell Renee immediately. So I'd also be interested in anyone's experience using both Renee and a regular/normal/traditional (sorry, I don't know the best word) sequencer together in the same system. If so, what ways do you implement that? All told that would be three two-parameter sequencing channels (Renee) plus four three-parameter sequencing channels (Black); I think seven sequencing channels is potentially overkill for the size system I have (though I guess I have six oscillator channels, and of course you sequence much more than just oscillator pitch). Ultimately I suspect I'd go back down to one sequencer, to make room for other fun stuff.

Thanks in advance for any thoughts. Cheers. 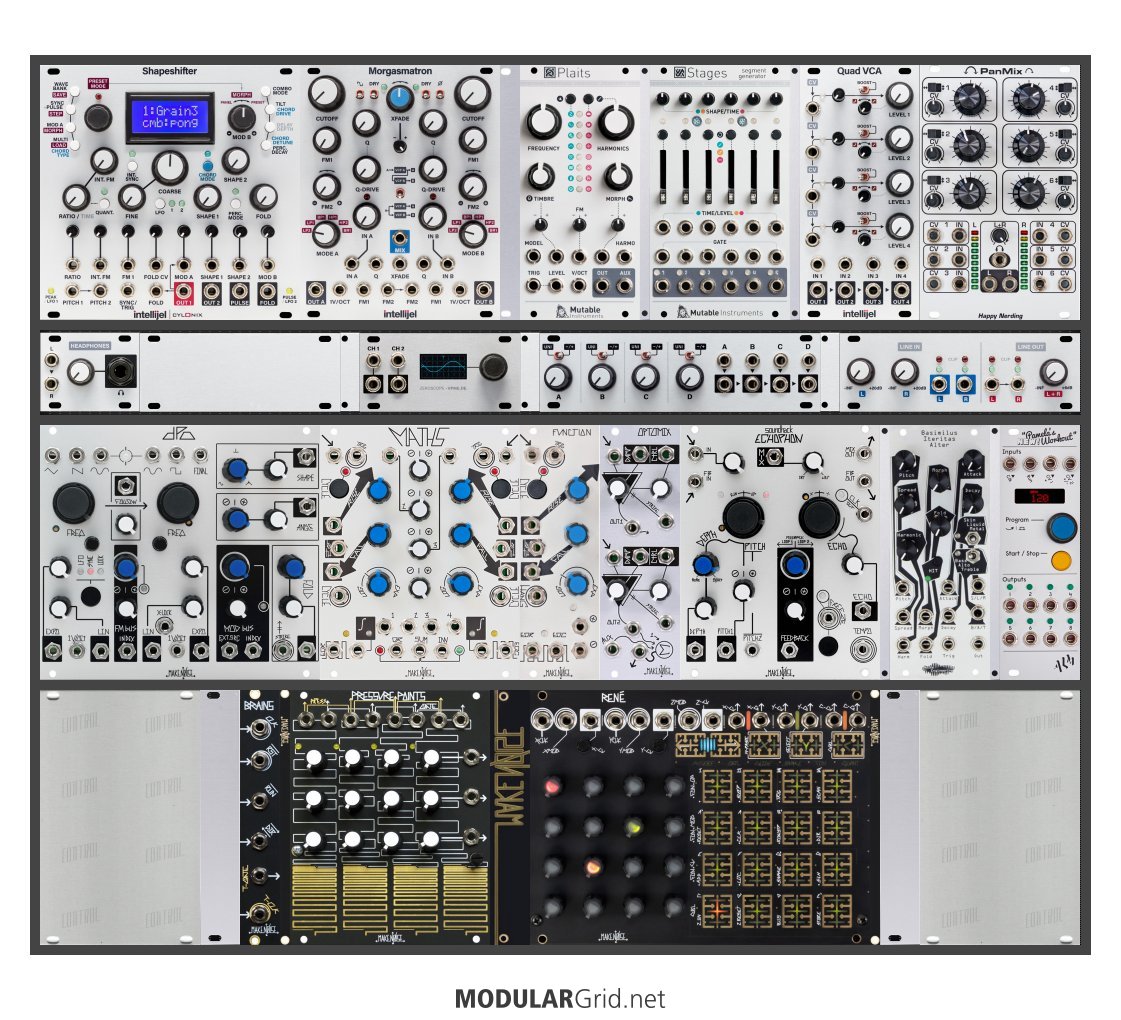 I don’t have a direct answer but I can say I have a Rene 1 and a couple more traditional sequencers. I like having the variety to chose from depending on how I’m feeling or what I’m working on. If you have the space and funds, it’s definitely worth a try to use both. If you prefer, or find yourself not using one, let it go.
Gristle Audio / Noisteria Emission at SoundCloud
Noisteria Emission at Bandcamp

I have a Rene V1 and a Black Sequencer (as well as couple others).
Workflow aside, one advantage to multiple sequences is radically different clock rates to enable longer form compositional changes.
As to comparison, as much as I appreciate Rene it isn't even in may case at the moment for real estate reasons. It is V1 though , not V2.
https://soundcloud.com/nxor-bos
Top

I have the Rene1, and did have a Rene2 on order, but the wait time was very long... and in the meantime along came the Black Sequencer. Finished. I am a very happy bunny.
It is, I think, the most hands on performance friendly sequencer out there - and I have far too many sequencers! At the same time as being 'jammable' ; for example, just use 16 steps across 4 channels and 16 patterns (that's a lot of permutations!), it doesn't stop there and it's quite easy to put together larger patterns, songs and projects.

I am having far too much fun with it. Just using the load pattern function whilst everything is grooving along... string the patterns together as you go. Instant variations. No more static sequences, which I'm sure you'll agree we all hear too much of in modular expositions.

Short answer: both! I sold my Rene v2 to fund a Black Sequencer. Ended up replacing it later with a Rene v1 to sit alongside the BS. I much prefer this combo to a Rene v2 for my needs/workflow. The Rene is much better at "integrating" with your modular system, talking back and forth with it, evolving with it... BS is a super powerful controller. I think they're very complementary, and don't step on each other's toes much. It just comes down to what you want. For me, BS wins.

I liked the concept of the Rene, but IMO the v2 fell a bit flat. It was trying to be a "centerpiece of you system", "let's pack as much as we can in the HP" type sequencer, but I couldn't get along with the multiple channels. Having 16 knobs was great for quickly dialing in patterns, but once you switch to another pattern/track, all feedback about what is playing is gone. Sure, you can go by ear, but it's hard to make deliberate/predictive changes to the pattern when you aren't entirely sure what value is playing. For me, this made the Z axis essentially useless unless I was happy just treating it as a random note generator. It would really benefit from LED feedback rings like Usta that could report all the pot settings when you switch between patterns. Plus, I found it pretty annoying to toggle through the menus to set up gates/glides etc. YMMV, lots of people seem to adore Rene, but I found that I want either real, controlled generative stuff (e.g. Marbles) or precise sequencing (e.g. Octatrack) and the Rene v2 was frustratingly in between those.

I was going to go for the Usta, but Erica released the Black Sequencer right before I pulled the trigger and I decided to try it out. Glad I did. Black Sequencer is amazing, my favorite sequencer ever. It has most of the power of an Elektron sequencer but faster to use and more intuitive. The 16 encoders have the same immediacy as the Rene for putting in a quick sequence, but you can easily toggle on/off gates, set up chained/glide parts. Complex patterns like probabilities/ratchets/arps are at your finger tips. The Magic button is a lot of fun for controlled randomness and finding "happy accidents"... e.g., set a melody, than "magic" the gates or probabilities for instant variation. And the mod channels are super powerful... essentially BS can replace a lot of dedicated LFO/envelope modules (and even do basic drum sequencing) as long as you are okay with those things being tied to your tempo and main sequence.

However, a few weeks after swapping Rene v2 for the BS, I really missed a few things about the Rene... most notably, the fact that it is not tied to a static clock. BS kind of assumes you're okay being constrained to a tempo, but you can use triggers to move around Rene with whatever timing you want. I really liked triggering Rene using random gates from Marbles to mess with the timing of a sequence. So, I bought a Rene v1 and it's been a great companion to the BS. I think Rene v1 is more playable than v2 (especially with the play mode, where you can basically use it as a 16-note touch pad). It's a lot of fun to trigger movement in Rene using the Mod channel in BS to provide an evolving counterpoint that moves in different ways.

I could go on.
Top

Thanks for the thoughts. Very helpful perspectives. I think I'm going to give the Black Sequencer a try, side-by-side with Renee 2 at least at first.

I wonder if Pam's will still get much use once I get a Black Sequencer. Probably will slave it to the sequencer and use its LFOs, etc. more.
Top

I do wish the LFO's on the EBS could run at lower rates.
https://soundcloud.com/nxor-bos
Top

I do wish the LFO's on the EBS could run at lower rates.

Agreed, it's my one main gripe so far. They're fine for rhythmic stuff tied to the sequencer pattern but you definitely need other LFOs in the rack for more evolving textures. You'd want dedicated LFOs (and envelopes for that matter) anyway if you want to modulate the LFOs with CV.
Top

I do wish the LFO's on the EBS could run at lower rates.

Agreed, it's my one main gripe so far. They're fine for rhythmic stuff tied to the sequencer pattern but you definitely need other LFOs in the rack for more evolving textures. You'd want dedicated LFOs (and envelopes for that matter) anyway if you want to modulate the LFOs with CV.

I frequently sample to the Octrack for performance oriented parts that I need to be able to repeat reliably (and portably).
Having an LFO that would run 1 cycle over 4 bars would be really helpful in this regard to keep modulation depth at the loop point clean.
I also tend to prefer longer LFOs. I have that covered for un-synced but an easy way to do it synced on unit would be great (no Pam's here).
https://soundcloud.com/nxor-bos
Top
Post Reply
9 posts • Page 1 of 1