my two clouds on self design panels henrry wrote:Soldering of the pots for this one required much more attention than for uBurst an uO_C

DO you have a picture of the uBurst? Also, was it challenging to solder those crystals in place?

I'm building a uBurst right now.. I had a few parts fuck ups in the kit I bought so I'm waiting for them to be corrected... I'm hoping to post my work here first but you never know, I might be posting on the unsuccessful builds thread first.. Soldering the crystals manually is easily done if you put solder on one pin first that you afterwards melt holding (or just having) the crystal in place.

Not having any tiny solder bridge in between the pins of ICs and amps is the most common difficulty for those MI nano builds.

To check everything I've been kindly encouraged to use a software named DipTrace.

to make those builds I use this method:

Just finished the build and programming of three uGrids: The programming was done quite easily with a Mac running High Sierra and an AVR Pocket Programmer on the hardware side.

On the software side, i used this useful tutorial to build the grids_bootloader.hex and grids.hex files using Terminal: Music Thing Modular tutorial

Then I used software AVRFuses to flash first the grids_bootloader.hex and second the grids.hex files. The fuses seem to be set automatically on the fuses page.
On the program preferences the choosed Programmer should be usbtiny. Link to the software: AVRfuses

I hope I didn't forget to mention any usefull additional information for those who are new to those builds.

I actually claimed victory too fast.

One unit has a clock issue and the two other share a same strange behavior on Ch1 and Ch2: the rythmic patterns look OK on the LEDs but the trigs/gates OUTs don't always fire accordingly. The result sounds strangly regular making longer patterns but adds a bit of randomness.

On one unit Ch3 doesn't output anything with the pot set before 12 o'clock...

I'll report all of this in a new thread.
Top

I spent some time figuring how to plug the JTAG correctly (didn't want to plug it backwards even if Tom Whitwell said it didn't damage his module).
Anyway, this is how I plugged mine on Rings.
It is probably obvious for many of you, but might help someone, who knows... Also could be worth mentionning that I had to update the stmlib submodule which wasn't up-to-date on my cloned repository.
And I had to export the interface env variables despite using what was advertised as the default programer?

Feeling happy to have rescued Marbles from becoming an expensive paperweight and for getting through the slow, claustrophobic handsoldering of Stages without issue. Plaits will have to wait until I get board of my current Mutable configuration. Where to buy these pcb’s? If possible in Europe?

I'm getting pretty good at drag soldering those SMT32 Chips..

I changed the LED colors except kept the pink one for the LED on the right..
The led on the left is supposed to be purple.... they gave me six when I ordered three.... Maybe they got cornfused and gave me a bunch of blue purpleish LEDs...? And I went for a green switch instead of red...

Er.... wait.... What color is the switch from mutable? I see a Richard Devine video with it red and a Divkid video with it green..... Oh well.. Whateves.. I think the BOM I had wanted me to buy a red one and I went for green...

I tried to rotate the pictures upon uploading to no avail...

And I need to order more knobs...... Always something to order...

Working on a twists (warps), a Rings, and another Elements....

I've completed a Shades and a Ripples and a bunch of other non-mutable stuff... 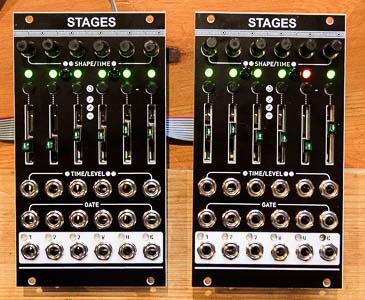 Deeply grateful for your help!!! Thanks!!!
Top

I re-designed the board with 0805 passives. I haven't calibrated it, but it seems to work. I need to fix a few things (like the placement of the lower LEDs and some silk-screening) before ordering some proper ones: Glad to be able to post my first two Mutable builds, Shades & Grids.

Had a hard time faslhing the Grids MCU, but got it working at the end with the amazing help from this community.

My grids was running slow, and had to do the bake command inside vagrant. Got a braids up and running!

The build was going fine until i got to the stm32

i couldnt get it properly alligned. Then the solder drag failed badly. When trying to get rid of the solder with some sucking braid, i couldnt help from getting the braid stuck to the pads and pins, so i ended up lifting some pads...complete despair.

At this pont i realized it was a no go, so with some chiquick solder removal i took the ic off. I had caused some ugly damaged to the board. Lifted pads 1, 4 and another one in one side.

Was looking pretty bad to be honest.

So i cleaned everything as best as i could and thought that i might have another mcu from my pending frames built, and i had two

So this time i tried with some solder paste and a hot air gun. This was the first time i had used this technique so i was a trial an error, but i thought since the pins where so small it would do a better job than drag soldering which had been terrible.

I replaced the pads with some tiny cut copper, held them to the board with some using some high temperature tape.

At the beginning it seem like it was doing a good work. Had the hot air gun around 150 degrees and low air. But after some tries and paste melt. I was left with lots of bridges between pins.

I probably spent the next four hours trying to fix the broken pads, traces....complete hell. I had to extend a pcb trace with the leg of a resistor and it just looked massive in size compared to the tiny pins. I had used this technique on other messups on trough hole and worked well but not before on smd.

Anyway i managed to finised the board with no further problems, and no aparent shorts.

Turned the module and absolutely nothing.

Connected to my computer with the olimex jtag, did all the usual stuff amd vagrant will keep reporting that it could not write to the mcu at certain speed.

As a last try y plugged the st-link v2 and made the make file upload...and presto! Braids was up and running.

To be honest i really think its was not going to work at all, so it was a big surprise when the led actually started working...

I think the problem with the solder dragging is that thinking since the mcu was so small i would need a finer solder tip, but i think it was not handling heat transfer to the solder good enough and therefore i would get stuck braid even if used lots of flux.

Oh well lesson learned, probalby ill do the mcu the first thing on the next frames, and just use my normal solder tip, as the fine one was a complete fail.

The only problem i have (which i have read is quite common) is my braids pushbutton menu potentiometer works backwards.

Need to look where exactly i need to change the code as it has been mentioned.

Hey batchas, thanks for pointing me out to the changes needed to fix the encoder backward function.

malnatim wrote:is it possible to stack 3 frames pcbs to make a module with 12 outputs and 1 frames pot? would this be a complicated re-write of firmware? i couldn't begin to do anything with the firmware, but if this is possible and someone were willing to re-write, i'll build the module.

Bringing back an old quote here but I am VERY interested in expanding my Frames module to 8 or even 12 outputs as said here....

Has anyone successfully done this ? Anyone have any more info about this I would love to hear about it, thanks
soundcloud
Top

Yay.
Built me some Plaits in large format.
I have been mainly old school analog until now, but man this is fun