Do you have any schematics ?

Only this if this makes any sense - I think the stripboard was 50 holes long that gave enough space for some screws on the ends but could've used some in the middle too.

Tom's design does have leds and resistors which are probably good to have as loads if there's no modules plugged in:

just wanted to say I built one of these up awhile ago. I use it all the time. Is a great test power supply. very small. No need for wall power/ etc its super convenient.
Top

Don't plug this into your computer, plug it into a USB Battery Pack. There are plenty of high power USB batteries out there that can deliver 8000-100000mAh or more. Many are easily under $100 too. Just do a google search for "USB Battery Pack" and you will get plenty of hits.
-James

Just got a Re:Load2 load so I've been trying to destroy my USB power prototype.

At 350ma it works OK (i.e. the lights are on, but I'm making no no claims on the power stability, ripple etc), pulling about 1amp from USB, the converter is definitely HOT, ran for an afternoon without death.

Absolute max seems to be is about 460ma, and above that, when you try to pull more current, all the lights blink and it says goodbye. Seems to have some internal fuse, so recovers after it's cooled down.

I initially had a 1a Polyfuse on the USB line (short circuited for this test) - that certainly seems sensible in the light of this - maybe 750ma would be safer.

So: no actual magic smoke but definitely some warm plastic smells.

Conclusions: This was a raw test: power to load, so can't draw any conclusions about what makes a good/stable/safe PSU for your modules, but it explains why I was able to power more than 125ma worth of modules with this thing.
Music Thing Modular
Radio Music Details | FAQ & Troubleshooting | Video & Audio demos | Buy
Mikrophonie | Spring Reverb | Turing Machine Expanders | Turing Machine
Music Thing Module Generator®
Top

Bought two IR0512S from Farnell (UK), both output +/- 30V! Luckily I tested the output before plugging in a module... Be careful out there...
Top

You NEED to test under load @edwinm. They will say +/-30V if you are testing them without a module attached. This is explained in the IR0512s datasheet down in the Notes section.
[1. Operation at no load will not damage unit but it may not meet
all specifications.]

Attach a module, I like Radio Music with their reverse protection and retest.
Top

Ah, interesting! Farnell are refunding me so perhaps I should refund their refund!
Top

I picked up a PCB from c1t1zen and then went and broke rule #2 from Tom's original post: I used it to record my new album: Super happy with this little thing...huge thanks to Tom and Kylee for thinking out of the box and bringing it to life!
DIY Euro synth panels: Synthcube

How long can you run that rig for on that battery pack? I guess if you're in your car you can use the car battery.

Are there other usb power options out there?
Top

How long can you run that rig for on that battery pack? I guess if you're in your car you can use the car battery.

The rig runs for a long time on USB power...around an hour using a cheap 2000 mAh charger like this, much longer on a fancier one.
DIY Euro synth panels: Synthcube

clarke68 wrote:I picked up a PCB from c1t1zen and then went and broke rule #2 from Tom's original post: I used it to record my new album

Hey, I did the same!

USB3.0will source 900mA max.
My synth is powered from 5 volt, but some applications really need more than that and there I use a dc/dc converter similar to what you use here and it works just fine

Tombola wrote:Hey, I did the same!

Can't tell you how inspiring your Superbooth Preview video was...it's what got me started on this whole "ultra-portable modular" thing, and eventually led me to Kylee's PCBs. Was very happy to find Bakusre and hear some of the same music as in the video! I've thought for a few years, and all the more now, that Music Thing has some of the most interesting module designs in all of Eurorack.

How long until Startup is released?

clarke68 wrote: Can't tell you how inspiring your Superbooth Preview video was...

Thank you, that's fantastic to hear.

Do you have any schematics ?

Only this if this makes any sense - I think the stripboard was 50 holes long that gave enough space for some screws on the ends but could've used some in the middle too.

Hi, thank you for posting your stripboard version, I'm gonna give a go at building it

I'm thinking of keeping the Leds & resistors of Tom's design, and adding your filtering options.

I just can't figure the values of those two components after the 10Ω resistors (they are ferrites right?), can you help me with this?

Also, anyone have a suggestion of a reliable fuse to use?
Thanks!
///
Top

What do you guys think about this one?

I ordered a couple of those from eBay to try out. Haven't gotten them yet though.
My rack: https://www.modulargrid.net/e/racks/view/361650
Top

daynehacks wrote: I ordered a couple of those from eBay to try out. Haven't gotten them yet though.

Please let me know if you try them out!

Thinking about ordering too, but I'm wondering about the level of noise. I'm eurorack, thinking of getting the 15V one and use 7812/7912 regulator pair as per suggested in the aliexpress link I posted. But then I'm wondering how much power get's lost, those regulators aren't the most effective are they?

Whats the mod to use a female usb port with this?
Top

Hey everyone, I've seen a few references to C1t1zen's improved version of this. Does anyone know how it's improved? Thanks!
Top

I have gone ahead and made a PCB layout of the USB power supply with the Meanwell DKM10E-12 mentioned above. I have not had the chance to do load testing, but the converter is rated to 416mA on both rails.

Things to note about my design:
Expect to see these PCBs on Modular Addict soon! I have talked with John and these, along with a couple modules I've been working on, will find their way on to the site once I finalize some things. I will start up a Github page as well where all my Eagle files will be posted.
All proceeds go towards my college tuition 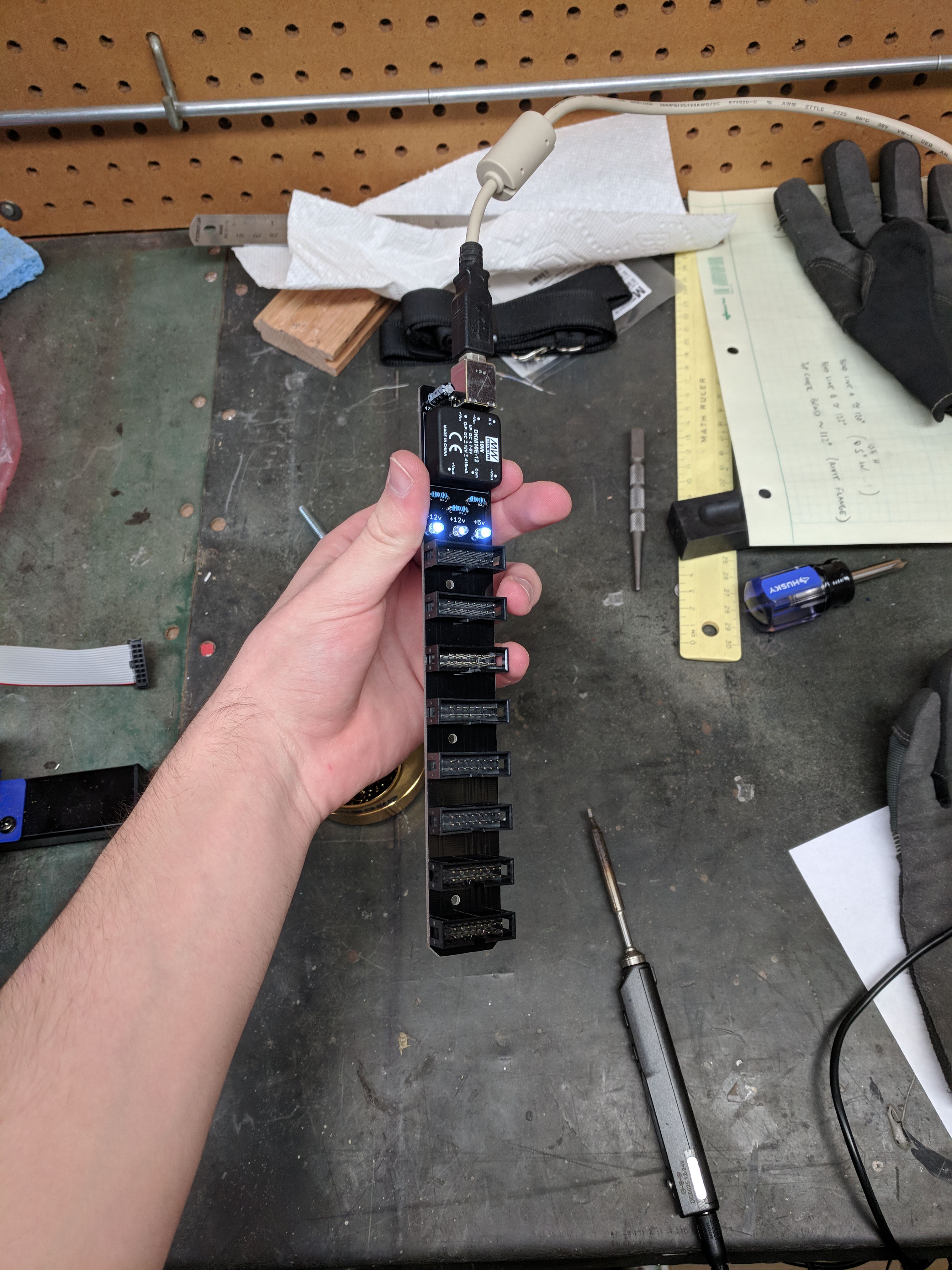 How’s the audio performance of the Meanwell brick? Ive been looking for a quiet, inexpensive way to power a Sunn Beta Bass preamp that I DIYed a while back, which needs +/- 15v, and was thinking of trying out the 15v Meanwell.
Fuzz pedal feedback coven.
Experiments and tunes and stuff: http://www.youtube.com/c/joelwhitneyjwhtn
http://jwhtn.bandcamp.com
Top
Post Reply
89 posts