We are pleased to announce availability of full synthCube kits for the Pharmasonic eurorack DIY modules...

First to be released is available now -- the full kit for the 702 VCO.

This thread can be used for documentation, build questions, examples, etc.
synthCube kit BOMs are attached here for reference original BOM and build notes are available via the Pharmasonic website


634-thickbox_default.jpg
22725.f.jpg
You do not have the required permissions to view the files attached to this post.
Last edited by synthcube on Fri Aug 28, 2020 3:23 pm, edited 4 times in total.
facebook: https://www.facebook.com/2SynthCube

thank you, yes, we are working on updating that site at the moment and adding more content and products-- back up soon-- thanks!
facebook: https://www.facebook.com/2SynthCube

Its in the kit, we will amend the BOM
facebook: https://www.facebook.com/2SynthCube

I'm comparing a few notes with synthcube and Pharmasonic before I post my full build report. Is there anything people want to hear from this oscillator? Specific patches? I suppose the most interesting things with a given VCO are its sync behavior and how it responds to modulation, so that's what I will try to focus on, but I'm happy to attempt any suggestions.
Top

appliancide wrote: ↑
Sun Sep 13, 2020 1:05 pm
I'm comparing a few notes with synthcube and Pharmasonic before I post my full build report. Is there anything people want to hear from this oscillator? Specific patches? I suppose the most interesting things with a given VCO are its sync behavior and how it responds to modulation, so that's what I will try to focus on, but I'm happy to attempt any suggestions.

On my build I'm hearing sync at work but not sure if it's properly working.
Not hearing a strong and weak difference atm.
At a higher external frequency I hear and see shape distortion. At a lower I hear locking to harmonics. Strong and weak sound the same

So to me it would be worth hearing. 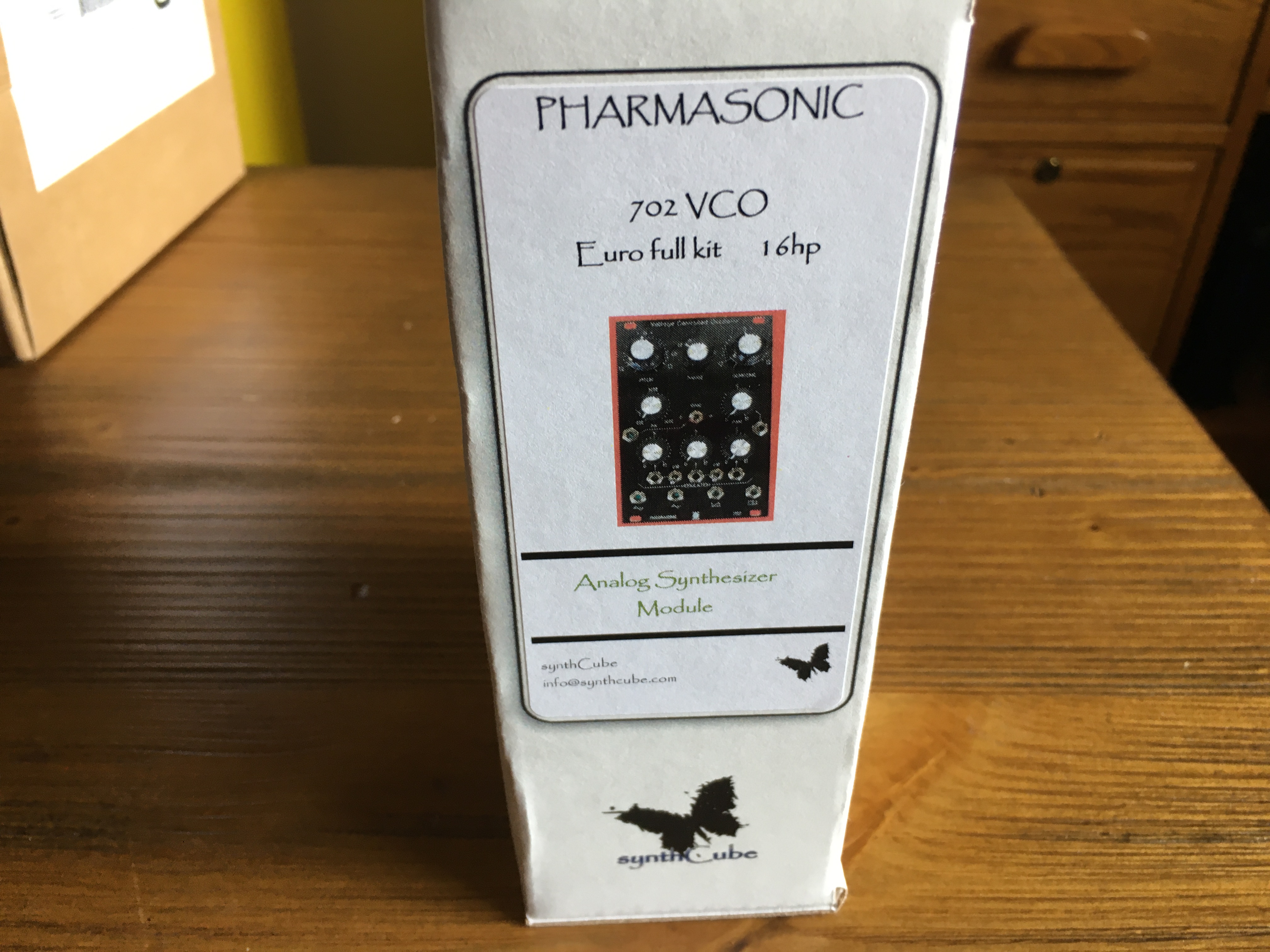 They are recycling baggies now! That's pretty cool, as we all know how wasteful that part of this hobby can be. 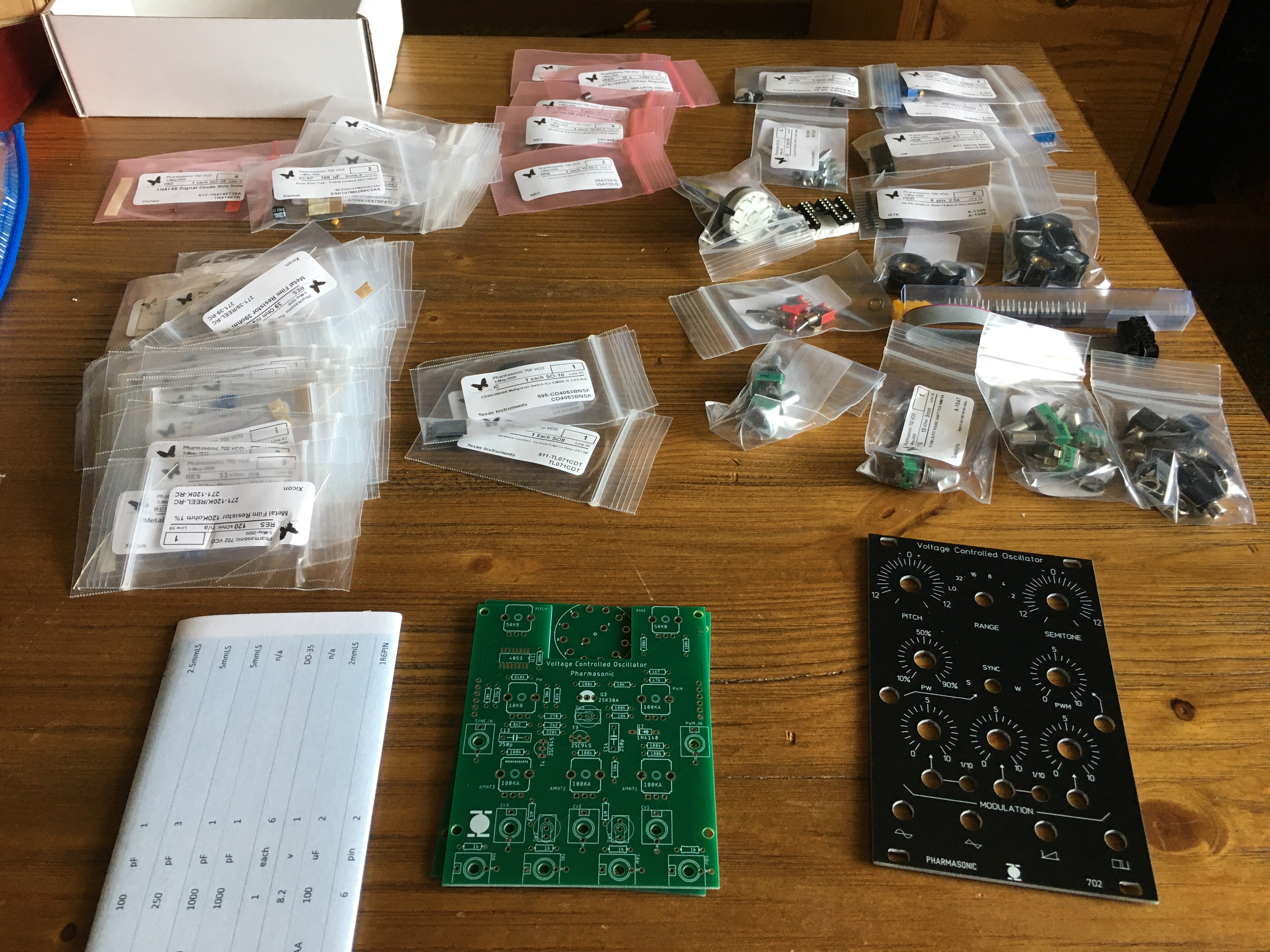 1. This one is under investigation by synthcube and Pharmasonic, but it looks like certain LM301 chips will not work for the square output circuit (IC10). The beta kit had 3 National Semiconductor LM301AN comparator chips. They worked fine in two of the positions, but not IC10. As soon as one side of the zener reference is lifted, you get a rail-to-rail square wave, so the compensation pins (or at least pin 8) do not work correctly on these chips. I had an old LM301 in my parts bin, and as soon as I swapped it in, the square out worked as designed (positive only). What needs to be determined is if the natsemi parts in question are not 100%, yet somehow made it into the wholesale market, or if the natsemi parts just won't work. The natsemi datasheet uses pretty much the exact circuit as this VCO as one of the application examples.

Just think about how long synthcube have been providing us with tested rare parts, in addition to dealing with discrepancies in different manufacturers' versions of supposedly "standard" parts. It really makes you appreciate the service that they offer!

2. Like many panels these days, this module has a PCB faceplate. Mine had a bit of a curve to it. 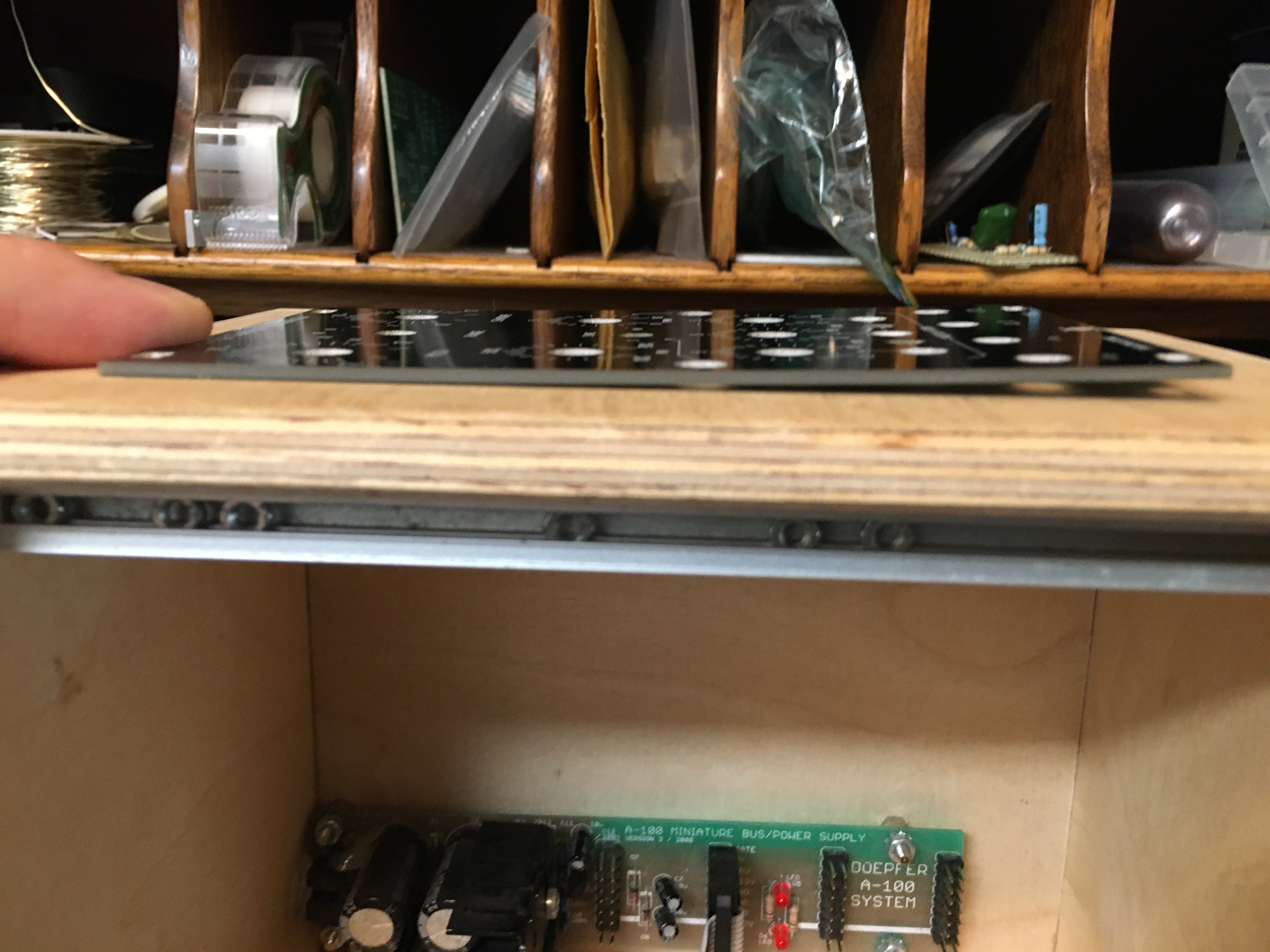 I just had to use extra care when lining up and soldering in the panel parts. I bent the panel so it was flush, then tacked down the four corners when I was confident the parts would line up with the holes. Once I verified that the parts were flush against the PCB, I added nuts to those parts to pull the panel straight and soldered in the rest of the panel parts. I did the little toggle switches last, as they are slightly shorter than the other panel parts. I soldered one pin while pushing up on the switch from below, then made sure it was flush to the board before soldering them all the way.

3. This one is for people like myself with less than ideal eyesight. There are 3 18k resistors, and if you are absentmindedly stuffing your board and not looking closely, it's possible to mistake the "18k" as "10k". This probably won't be an issue for most, but I sometimes switch to autopilot when stuffing resistors, and have so far resisted switching to bifocals.

4. There are two 1n capacitors, one of which is polystyrene. Looking at the original schematic, it looks like the polystyrene should be C9 on the pharmasonic boards. That capacitor sits a bit high, and will need to be bent a bit to fit when the PCBs are mounted together. 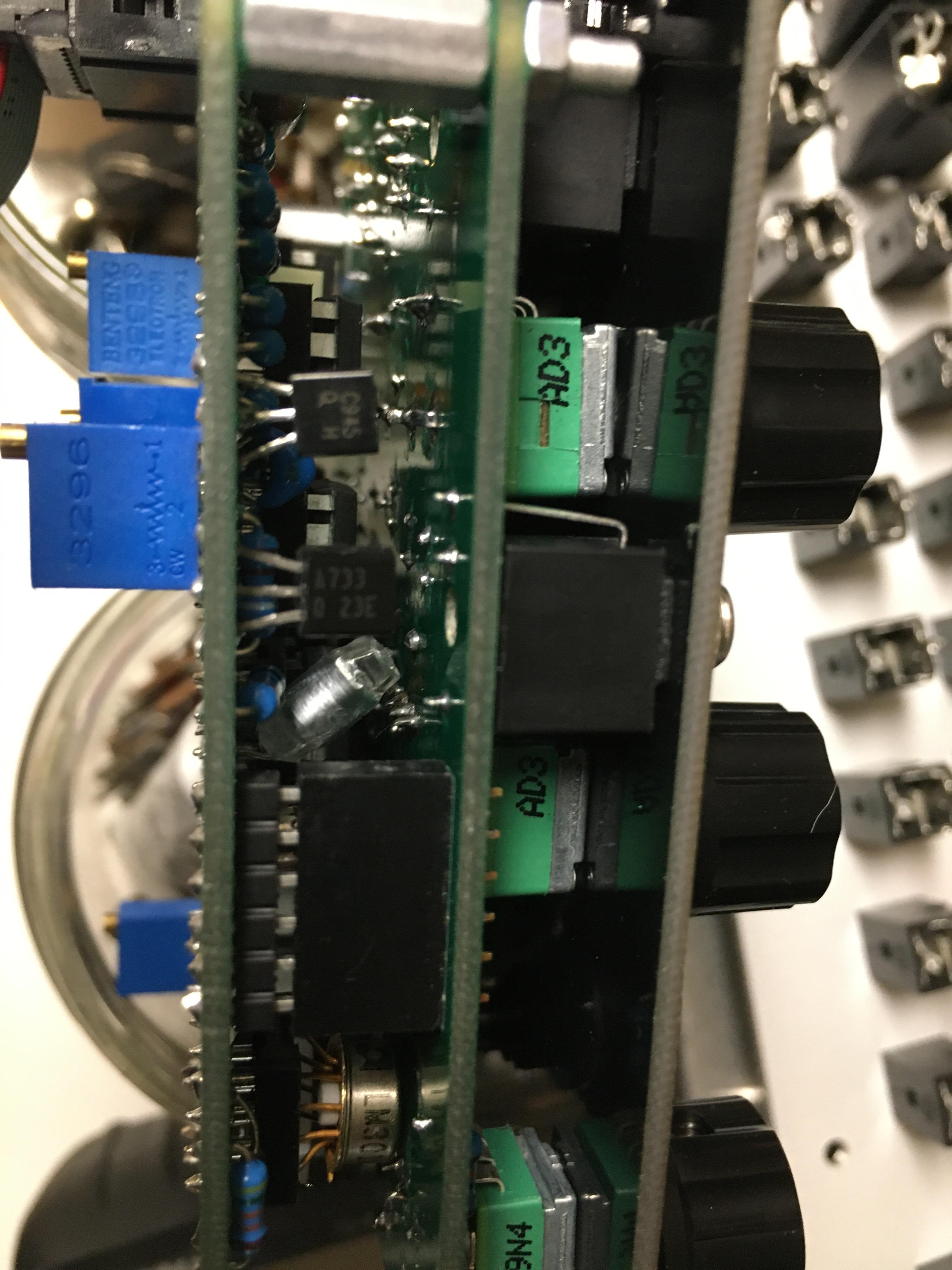 5. Notice in the above picture that there's a little gap between the headers if you mount them flush to the boards, due to the standoffs being a hair taller. They make full contact as shown. I continuity tested all of the connections before soldering just to make sure.

6. The last parts I soldered in were the trimpots. Some of the pins are fairly close to caps, so steady those hands before soldering so you don't melt anything! It would be far more annoying to solder the trimpots in first and have to avoid them as you soldered everything around them.

Calibration is a bit more involved than some VCOs, but not too bad. The instructions say to set VR1 "halfway" which is not really possible to do visually if you are using multi-turn trimmers. I used a multimeter to make sure it was in the middle. This can be done before or after the trimmer is soldered in.

I'm not sure if the calibration instructions in the build doc are directly from the original service documents or not, but I couldn't match the exact process. With the range at 2' I was not able to get the VCO down to 1760Hz as described. To calibrate the range, I ended up setting the VCO at 16000Hz at 2' and 1000Hz at 32'. For the final adjustment, the tuning step, 8' was not able to be tuned to 440, so I set it a couple of octaves higher.
To follow the exact calibration procedure, you will need a CV keyboard, but I did most of it with a MFOS V/Oct calibrator. Being able to play A3 really only matters if you want the VCO to be at that pitch when the pitch and semitone knobs are at 0.

I would classify this as an intermediate build. I would not recommend it is a first build, but then again I've seen people build entire 4U panels as their first project. I built this over about two days. If you pushed yourself, you could do it in a day, but I prefer calibrating and troubleshooting "fresh". That gives me the patience to find and fix issues should any come up. Tired appliancide is a crappy tech!

I tore apart my workbench and music table after I finished this build yesterday, so its' going to be a couple of days before I can post some audio demos. I will definitely be posting ndkent's request, as well anything else I can come up with that might be useful or interesting.

Feature-wise this seems like it's going to be a great VCO. The 1/10 switches on two of the three modulation inputs are a very cool feature. Not something I would have ever thought of, but can definitely see potential uses. The positive-only sawtooth and square waves are interesting. I assume there's a reason for that? Curious if there's much of a sonic difference.

It's very pretty when finished. 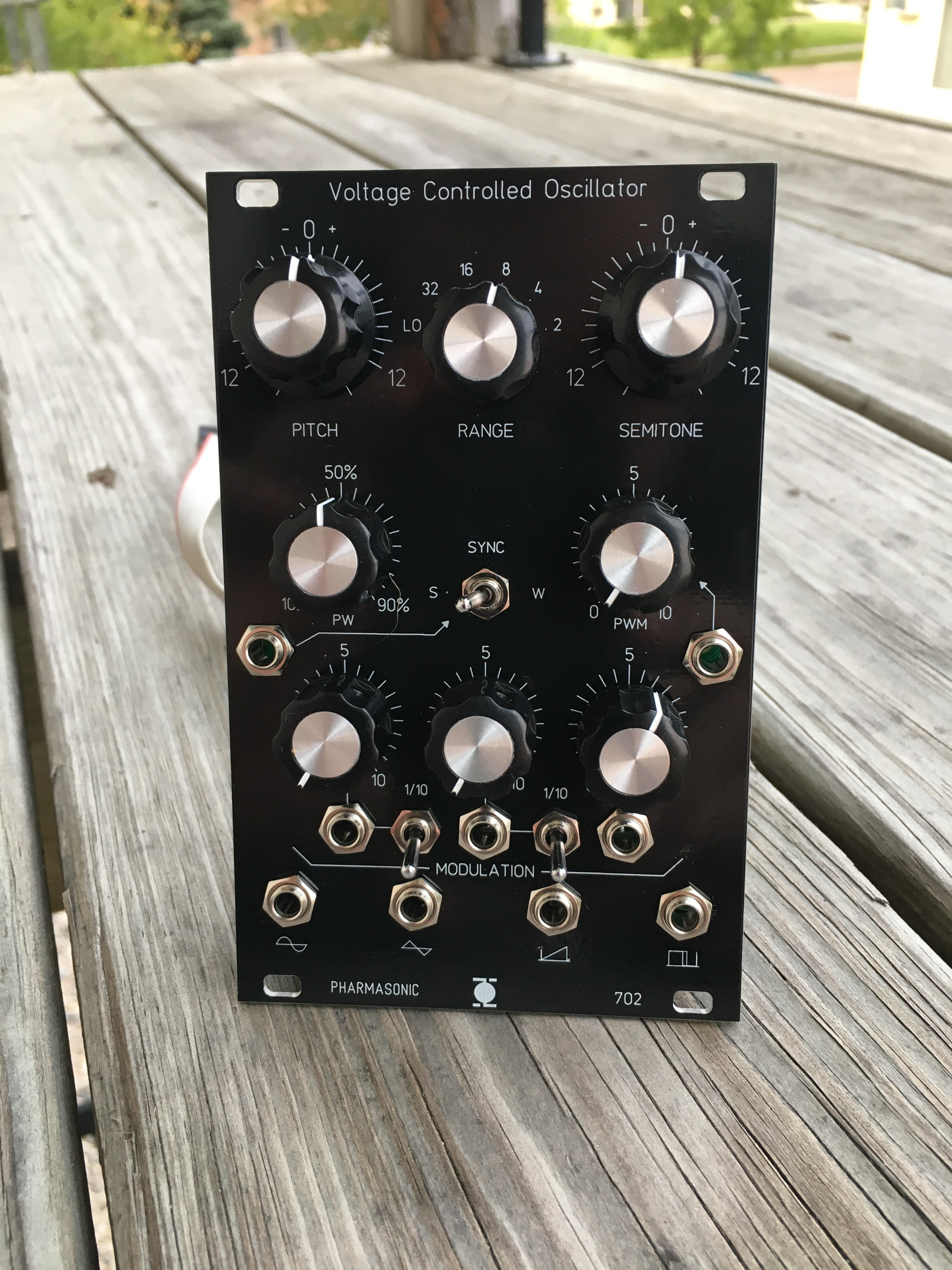 Thanks appliancide for that build report. I just built two, one from the kit, one with parts I sourced myself.

Can confirm, IC10 DOES NOT WORK with the kit supplied LM301AN, the pulse out fails.
I had an extra TI brand LM301AP to swap which worked.

My faceplates are not perfectly flat but nearly so.

Agree the "0" with a slash and "8" look very similar in the PCB font used.

VR1 was intended to be a single turn trimmer - looking at the footprint, so half way would be achievable.

Found the styrene cap confusing too but not too hard to figure out by elimination. The film cap has a drawn footprint.

I swapped less common 11mm standoffs myself, the gap with the supplied 12mm isn't too bad imho so I really didn't have to swap.

I've been encountering issues with my sync. One build's sync seems to work, ironically it works best with the positive only pulse wave from the other 702, but I've not quite figured out if I'm getting what I should be in terms of sync sound.
Last edited by ndkent on Sun Sep 20, 2020 1:43 am, edited 3 times in total.
http://nickkent.net
twitter youtube more youtube soundcloud
Top

thanks for the confirmation on the LM301 issue- we will amend the BOM for 'LM301AP' ONLY for this kit...
facebook: https://www.facebook.com/2SynthCube

Is this helpful? Arbitrarily picked the frequencies, and used the Teezer sawtooth to sync.
Top
Post Reply
11 posts • Page 1 of 1