Thank you for your advice, Grep.
http://kragg.fr/
Top

.... I have two of them, my wife has one, and my live-in disabled younger brother has one of them. So we have four M13s in our combined home studios.

*** Sets of twelve FX models of your choosing arranged in "Scenes". You may name your Scenes using any names you wish.

*** Auto-Save function ... it automatically saves all of your FX settings without having to do anything ... just set up your FX sounds, and your work is auto-saved. This function may be changed so you must manually "push this, pull that" to save your settings.

*** You may set the signal flow to go from left to right, or right to left.

*** Ability to use TWO expression pedals (totally assignable to each of the four FX blocks and assignable to any/all of the five controls per FX block ... some functions can be increasing while others are decreasing as you go from heel to toe).

*** The 24/48 second phrase looper makes the M13 highly unique. When recording a loop, the phrase looper may be placed either before the FX or after the FX when capturing a phrase ... you can capture a phrase with any/all of the FX applied to it ... and then the phrase may then be played back before the 4 FX blocks so you may apply even more FX to the captured loop.

*** The loop can be played back in reverse (foot-switchable) and placed before the FX so you can apply the FX to a reversed loop.

*** The loop can be played back at half speed (foot-switchable) and placed before the FX so you can apply the FX to the half speed loop.

*** You can use expression pedals (up to 2 of them) to tweek the FX that any of these loops are being recorded with, and/or played back through.

You already know what is packed inside the M13 (sounds/fx) since you have an M5.

I've been able to buy the M13 for as little as $225.00 shipped (used) in excellent condition on eBay. Just be patient and persistent.

What else can you buy for $225.00 shipped that provides all of that function and sound?

5U MODULAR NORMALIZING PROJECT (for your entertainment) viewtopic.php?t=78836&highlight=
.. given the choice between conformity and self respect, I choose the latter.
.. dominion - noun: control or the exercise of control . power . possessed and controlled domain . sovereignty . having dominion over the world . supreme authority . absolute ownership . power . authority . jurisdiction . control . command ... power ....... power .......... power.
Top

Rex Coil 7 wrote:You already know what is packed inside the M13 (sounds/fx) since you have an M5.

And one neat thing i like about the M5 is that you can map several parameters to the single expression pedal, each one with a different range

Like you mentioned, I built a simple "one knob box" that i can put on top of an electric piano, and it can change both the mix, decay time and and tone at once.

The M13 seems a bit too big for my live rig (i have a Zoom G3, which has a nice form factor, but is a bit weak when it comes to delays and reverbs).
http://kragg.fr/
Top

I just discovered this one today : 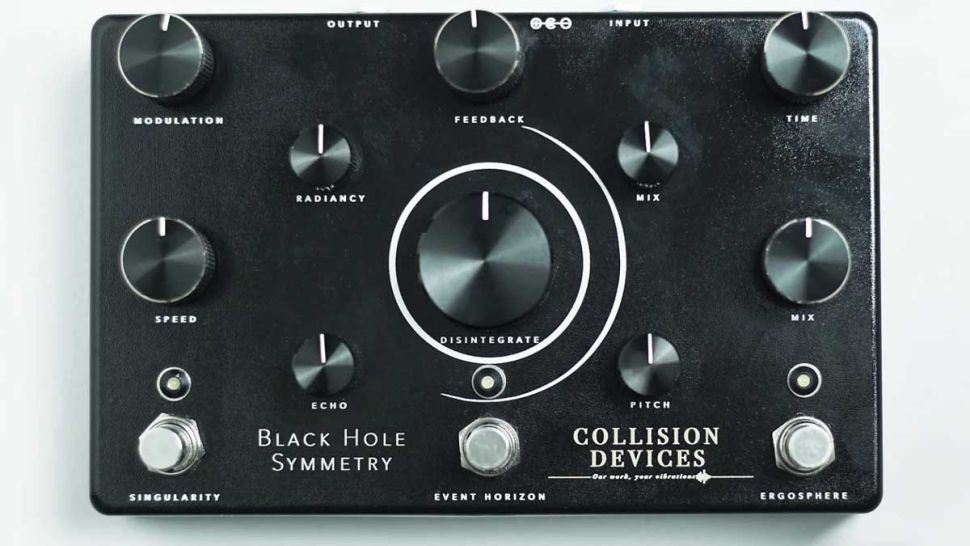 I have one and recently used it as my sole send/return FX for a small improvised live set with a modular...

from that I can confirm: great characterful sounds, "vintage" in a box that requires no tape changes or maintenance

BUT:
if you need clearly audible repeats, you´ll have to dial that in VERY carefully and probably not use the reverb part.

it gets muddy/cloudy really fast, not in a bad way - but very definitely not able to get that clean sound most of the other boxes mentioned here provide.
may you live in interesting times.
Top

Any lucky ducks get to play one of these from the first run? Second run supposedly coming soon. Looks like 229 USD

From Old Blood Noise, got their second version of the Dark Star - man, that bitcrusher mode is out of this world! - and their new Flat Light where you can get some really great modulation.
http://soundcloud.com/wsmetak
Top

Another vote for the Mooer Ocean Machine
It has become my go-to box for almost everything lately and has plenty of knobs going on.
Effectively if you are just looking at it from the front panel point of view, both delays and reverb can be used without any menu diving, and with 'trails' enabled you can change reverb and delay modes while playing.
Each effect gets a dedicated mode knob and 4 dedicated parameter knobs. very easy to use without getting sucked into preset hell

You can also change the chaining pattern on the fly as well which is super interesting. Especially handy with the built in looper being able to insert it anywhere in the chain.
The looper is pretty damn basic and unfortunately has no undo, but it does support 1/2 speed and reverse.

There is an optional 'wireless' foot controller for it, but i found it to be more or less useless, and they did not think far enough ahead to allow you to remap the switch function.
What works better instead i find is a SourceAudio Soleman MIDI foot controller. With this you can really expand what the ocean machine can do, plus have the pedal at desktop height for knob tweaking while controlling with your feet.
Some of the extra things i have mine configured for are: Freeze effect for reverb/delay1/delay2, reverb shimmer control, extended looper control, and i can also use an expression pedal to control the input vol like a morley pedal.
Top

Doesn't tick all your boxes, but the Boss RV-3 is damn good and can be had quite cheaply.
Top

Just scored a Specular Tempus from a friend and I’m in love. Really just wanted it for the lush verbs, but I’m pretty stoked with the delays so far too. Easier to navigate than I had expected.
Top

Thank you all for the tips !
http://kragg.fr/
Top

Addam wrote:Any lucky ducks get to play one of these from the first run? Second run supposedly coming soon. Looks like 229 USD

Friends of friends of made this. Great players and nice people. Haven't had a chance to try myself, but it is a new favorite of those i trust who have one.
Top

Zube
Very cool. I just ordered an OBNE dweller, which is the first guitar pedal I’ve bought in a couple years. If I can sell some stuff I’d like to grab the Rever too.
Top

Just a wild offering but Nick @ Sonic State uses one of these on his demos and I really like the sound - more reverb than delay but does cover delay ground too.

https://www.sourceaudio.net/ventris-dual-reverb.html
I'm looking for nothing at this moment in time
Top
Post Reply
39 posts