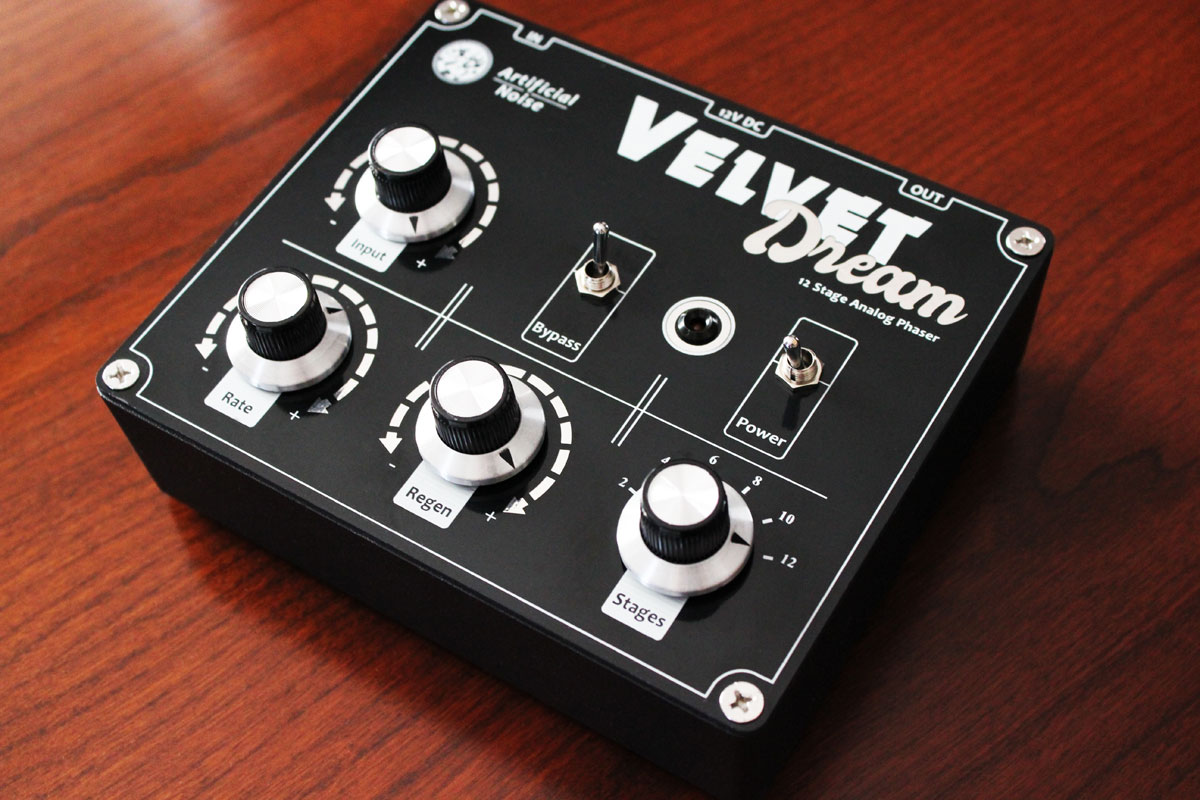 There's been a few mentions in this thread of using two phasers as a stereo pair. Anyone who's experimented with this care to comment?
I like the idea for string synths and pads, and have return channels on my mixer free.
Top

Still a prototype with a cheap paint job - hopefully, out by the end of the year. Technologear? wrote:There's been a few mentions in this thread of using two phasers as a stereo pair. Anyone who's experimented with this care to comment?
I like the idea for string synths and pads, and have return channels on my mixer free.

I'm thinking my next phaser purchase will be a simple EH Bad Stone or MXR Phase 100. I really like them both and prefer the simple phasers to the more complex boutique ones I think.

Those Behringer knock-offs look attractive for an experiment like you mention.

I currently use a Castle Instruments Phaser III for specific duties, an EH Small Stone for string synth and Micromoog (on which I used to use the Boss PH-3. I may replace the PH-3 with either a Badstone or Phase 100).
FS: SP-555 Sampler, Pedals, ASol SQ8 - CHEAP!!!
https://www.muffwiggler.com/forum/viewt ... 4&t=227738
WTT: my Mangler for your Rumour
Top

Technologear? wrote:There's been a few mentions in this thread of using two phasers as a stereo pair. Anyone who's experimented with this care to comment?
I like the idea for string synths and pads, and have return channels on my mixer free.

I do it a couple of different ways:
If you have 2 phasers that can use ext LFOs, then you sync to each other (with slightly different color/regen settings) for a cool feeling of movement.

Easy mode is the Moogerfooger — plugging in the aux output splits 6 each of the 12 phases between the aux/main for a very cool but subtle shift, but that’s mono in/stereo out; not so great for a mixer send. You can kind of recreate that if you have something like the Serge Resonant EQ where the eq bands can be sent to different outs, then phase them separately.

Obvious Jarre-style is put the mono phaser into a planner and have it swim around the stereo field. The shifting almost feels like front/back, so it’s a trippy almost quad feeling.

EH Stereo Polyphase does the stereo phase thing all in one box. It's optical and can use ext CV.
Top

Thanks for the replies. I'm GASing for X2 ehx small stones to trial this experiment, but as MM said above I'm not committed enough (or have that level of disposable income). I most want to try non synced LFO rates, just slightly off sync, I'm imagining it being deeply trippy in a 'new wave psychedelic' way, not in that nice old school 60s psychedelic way. More extreme the better.
Top

Well if you are not averse to buying the Behringer version, you can get two of them for about $40-60 (used/new). Their version sounds pretty good. Not sure on their noise level. Only heard on-line.
FS: SP-555 Sampler, Pedals, ASol SQ8 - CHEAP!!!
https://www.muffwiggler.com/forum/viewt ... 4&t=227738
WTT: my Mangler for your Rumour
Top

GrantB wrote:EH Stereo Polyphase does the stereo phase thing all in one box. It's optical and can use ext CV.

This. If EHX doesn't put independent non-linked LFOs into their stereo phaser, it means that we probably wouldn't want to hear that effect. I came to this conclusion from trialling my '2 separate phasers' experiment using my Digitakt, using LFO to modulate filter resonance on 2 instances of a short loop, hard panned. Everything was equal on both channels except rate.
When the rates were slow and very similar, it sounded 'ok but not great'. Like a pad that disappears into the background of the mix once you bring in other elements because it isn't appealing enough to be the focus of attention.
Fast rates or more dissimilar rates per channel sounded annoying.

Once I discovered that phase before distortion is way more subtle, I became a fan for guitar. Great way to add movement to lead tones while remaining articulate. Only caveat is finding a phaser with low self noise. Retro Sonic phaser fits that bill for me.
Top

My fav Phasers are the Roland PH-830, JH Tau Pipe Phaser and Hordijk dual phaser.
The PH is so creamy, JH Tau Pipe is awesome for its depth and Hordijk surgical and more precise than the two first.
Had a Bi-Phase clone in the past but did not like it
Top

eddie van halen's use of the script logo mxr phase 90 was incredible!
it was more like a cocked wah /filter and that sound is his forever.

not many dudes can get away with using one without instantly sounding like him, so in a way evh opened and shut the door for phaser use on leads in a hard rock context
Top

Works great with a cheap fuzz

Re: I'm addicted to Phasers.

I have an Original Mu-Tron Phas0r 2 and an MXR Phase 100. my favorite way to use them is to put a tube screamer before both of them, set the Mu-Tron to a very slow sweep and then the MXR to a significantly faster sweep. I play Bass.

the Mu-Tron Brand has been resurrected recently and had a very limited re-release of a bi-phase ($+500), and they even teased a Bi-Phase 2 at NAMM this Winter!
Top
Post Reply
189 posts