Just received a heads up from schneiders, looks to be arriving within the next week or two.
Top

New kid in town.
Here the first try, the crackle comes from the mobile

Nice!, Congratulations!
It sounds so much better than the Arturia version

so full bodied and warm.
I am psyched to have hands on this...I was watching more Todd Barton stuff last night my VCS-3 card arrives today, man this next few weeks is going to be amazing to say the least!

nice video i enjoyed it, did you have any experience in other synth worlds before entering this buchla one or is this your first journey?>
Top

Great stuff! Fun to see what people are doing with these.
Instagram: https://www.instagram.com/markscheuern/
Top

0netwo0netwo wrote: ↑
Thu Jul 16, 2020 3:14 pm
nice video i enjoyed it, did you have any experience in other synth worlds before entering this buchla one or is this your first journey?>

Thank you very much. No, I'm not quite the beginner. I've had an Easel and other toys for a while now.
Easel + 416 Meta Expander & Snoopy a big show
Top

For anyone who bought one from a vendor, I just got a notification from Detroit Modular that they've received their shipment of command modules and will be sending mine tomorrow.

Also, if you weren't able to get one from this first run, it might be worth contacting the stores who will be carrying them to see if they have any available. As Eric had mentioned they didn't have as many to send out as they were first were planning so some stores didn't get as many as they were originally expecting. When I talked to DM a couple weeks ago they said their website showed the modules as out of stock because they weren't sure how many they would be getting and didn't want to oversell them. So it's possible they have some available.
Top

Just picked up my Easel Command at Rock N'Roll Vintage in Chicago. I saw a box full of 4 of them, and I believe only mine and someone else's were spoken for. Give em a call if ya want one! The should have two available.
Newest Release:
https://levinson-mahlmeister.bandcamp.com/releases
Top

Received mine a few days ago - coming from Eurorack - very fast to clear and start with new patches - really impressed with 208C - build quality is also very good - extremely versatile - quick to explore new sounds - learning the smallest change in a fader or rotary can have a big effect - fun stuff:

re: Don and lack of manuals ...
What I heard was that Don wanted his instruments to be non-proscriptive and thus wanted
every user to make connections that he hadn't thought of no matter what their musical
background, learning, not-learning, training, not-training. As Allen Strange wrote at the
end of the Easel manual, "TRY EVERYTHING -- the least that can happen is the something
will be learned." Happy exploring! Follow the sound!
Buchla/Serge/Hordijk Skype Tutorials http://toddbarton.com/buchla/buchla-skype-tutoring/
https://www.patreon.com/synthtodd
https://soundcloud.com/user7621213
https://www.instagram.com/synthtodd/
Top

I’ve read the same thing, and I still think a real manual makes sense. Without defining what the device should be expected to do, you can’t even know if it is working correctly.

Frankly, I think the suggestion that a proper manual might hinder creativity is absurd.
Top


Great demo! Thanks a lot for sharing.

I had about three hours to play with the Easel Command last night. Here are some initial thoughts:

So, I may be coming at this backwards for some people here. I'm coming from Eurorack, and a large portion of my setup are modules that are Buchla style clones. Things like Verbos Complex Oscillator, Make Noise Optomix and Maths are the heart of my small system. I've also wanted an Easel ever since I've been into modular synths, but couldn't really afford that large purchase at first. My goal with getting this new Easel Command is to sub out a large portion (or hopefully all) of my eurorack. This may have been a lofty goal I'm realizing. I also am really sick of the cycle of buying and selling with eurorack, and the culture that surrounds it, and was hoping to leave the format. Its an endless source limitless possibilities that some people do enjoy, but I'm finding for me that its becoming unhealthy and its hindering creativity. My personality needs limitations I think. Lastly, I really want an instrument that's designed as a whole, not just a collection of modules. I want something that has a beautiful interface that makes me insipred to play it, that I can learn like a guitar.

With that said, here is what I think of the Easel so far... It sounds amazing. The interface is beautiful. The build quality is excellent. It does already inspire thinking about patching in a different way even in the few short hours I've spent with it. Its more intuitive than I thought it would be. The midi works great right out of the box, got it going with very little effort.

So, with that said, will this replace my eurorack? I don't know yet. I A/B-ed the Easel with the Verbos CO and Optomix combination, and honestly they sound really close. The Verbos wavefolder actually sounds warmer than the Easel, less high end. The Optomix has vactrols in it that ring slightly less than the Easel, which I slightly prefer. As far as functionality, I think if I went only Easel, I'd really miss having a dual function generator like the Maths. So, I must confess, I think my expectations of the Easel were going to be that some magical Morton Subotnick / Charles Cohen fairy dust were just going to pour out of it and I was going to instantly curse my Euro away. But honestly, its just not the case. Its really a testament to some of these Eurorack makers like Make Noise and especially Verbos to show that they really can make convincing Buchla clones in Eurorack. It makes the decision a lot harder because its making me question whether or not I should embrace a new format or not, because envitably I have to just trully embrace the limitations of the Easel, keep some of the Euro and deal with converting voltages and such (which is kind of counterintuitive to me) or eventually buy more Buchla modules, which is expensive.

This is all part of the journey I guess... Sometimes you take some turns, and they lead you on a new path, or sometimes they send you back to where you were before. May fully change my mind again later but this is where I am now.
Newest Release:
https://levinson-mahlmeister.bandcamp.com/releases
Top

I'm going to make an adendum already, the Buchla Easel sounds even better than I thought. I was listening on headphones last night, but on speakers there is so much low end, heft and clarity. Even just the pure sin wave sounds pretty great. I was messing around with the Easel and the Make Noise 0-Ctrl. It's really nice combo. Also, the iOS app called Ribn is a really amazing app for it as well. Sends looped or static midi cc data on whatever channel you want and I was easily able to send all sorts of data to any parameter on the Easel.
Newest Release:
https://levinson-mahlmeister.bandcamp.com/releases
Top

The Optomix has vactrols in it that ring slightly less than the Easel, which I slightly prefer.

I'm not crazy about the sound of either half of my Optomix. I tend to use the LXD far more for pinging. I'm very pleased with the sound of vactrols in the Easel Command.
Top

Mine will deliver in the am and I was just wondering if the 0-Control would be of any use! How did that go? I have the Verbos Touchplate and a CVGT1 on the way from Noisebug as well.
Looking over the edge of the 5U hole
Bunch of Eurorack modules, GRP 24, Vector sequencer, Vermona Performer MK2, OB-6m, Elektron Analog 4 mk2
Top

Bet the 0-Control would be really great with it. I tried my Pressure Points and it worked well.

So mine came this afternoon, I just spent like 4 hrs with it and I gotta say it sounds amazing!
It feels solid as can be. I think I figured out the LEM 218 thing but I also prolly/may need a good while to get used to it, pretty amazing though.
The EMS VCS 3 card is crazy, I think I need to really spend some time with the Easel before I get into that deeper, that said I tried it out and its pretty darn awesome as well. Glad I ordered a bunch of extra bananas and bars! I have a feeling I will be busy with this thing for quite some time to come...
Well Done to all the folks at Buchla USA 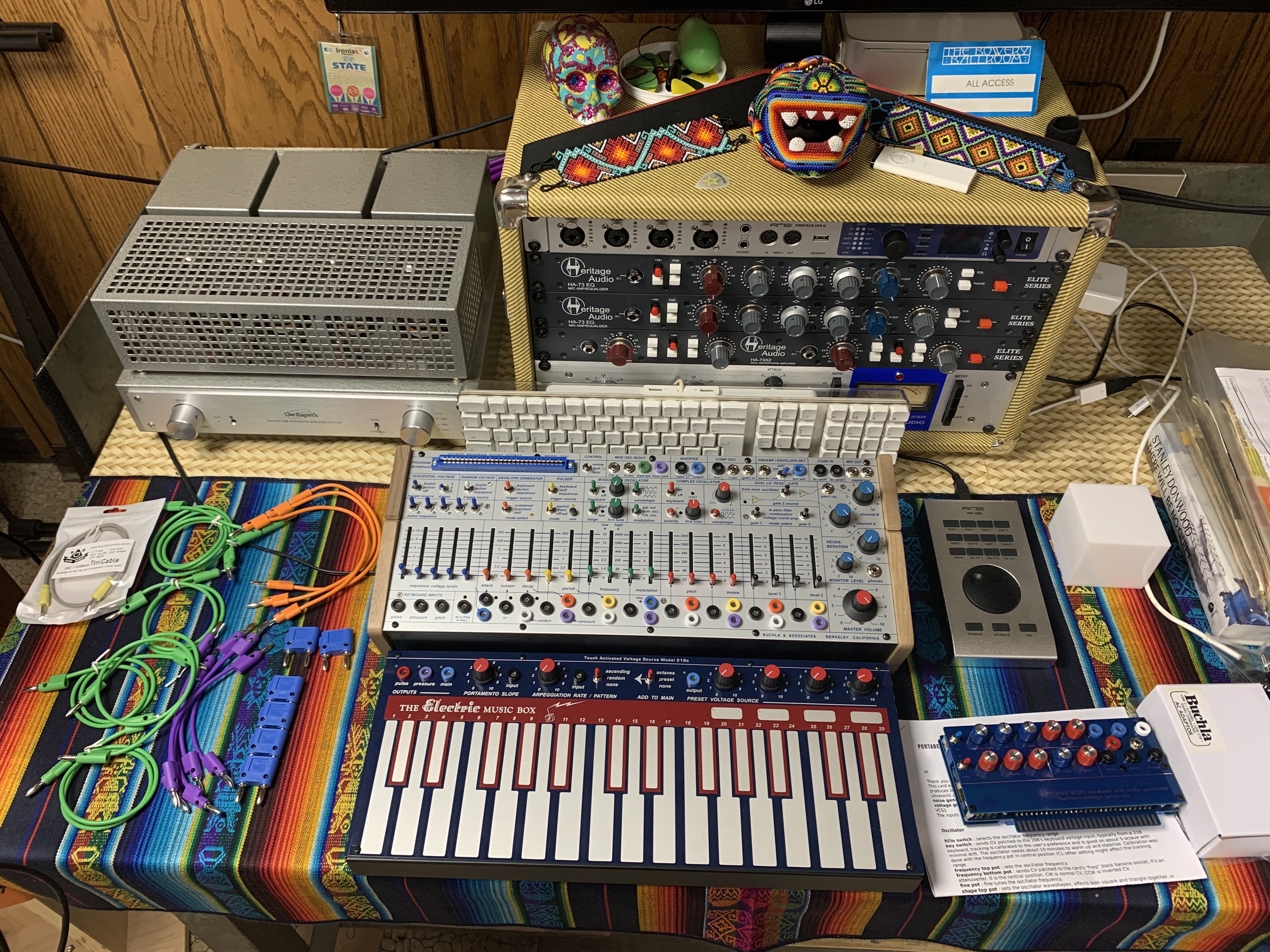 The 0-Ctrl is pretty awesome with the Easel. I rigged up a make shift 3.5mm to banana cable. The dynamic gate output works really well going straight into the cv input for the lpg. It maintains all the dynamics as set by the knobs. Only qualm with the O-Ctrl is a the pre-set envelopes, I hate how you can only get these snappier if you have a clock coming into unit. Also, the pressure output has a preset attack and decay that is longer than I prefer. I tried Pressure Points with the Easel as well. Works well. I really would like an LEM 218. I can't find one anywhere though. So maybe a Morph for now? Is it worth it?
Newest Release:
https://levinson-mahlmeister.bandcamp.com/releases
Top

I love your tablecloth and Wixárika pieces of art.

I’m having trouble figuring out how to trigger the env via midi with the Morph or Launchkey Mini.... any ideas? I’m getting pitch and pressure, but can't work this out.
Top

Is the Envelope Generator trigger source switch on the 208c set to Keyboard?
Instagram: https://www.instagram.com/markscheuern/
Top

Attached the Midi Implementation Chart. EG is triggered by Note On Note # 6-8, channel 1, 2, 3, 4, or 5.
You do not have the required permissions to view the files attached to this post.
Top

I noticed on the midi implementation chart posted above that it requires note messages sent on a different midi channel to trigger the eg. I'm going to try to create a template in the Sensel app now./s]

I've not had any issues triggering envelope via midi din with the Arturia Keystep and via iPad with the usb connection as long as the Envelope is set to keyboard. Are both of those MPE? Maybe there's a different configuration?
Newest Release:
https://levinson-mahlmeister.bandcamp.com/releases
Top
Post Reply
460 posts