Wogglebug is something I never managed to get hold of
Is there anybody doing PCBs or a 5U version?
Or coming to think of it is it possible to recreate the functions with discrete modules?
Top

I bought a Wobblebug in MOTM format from ebay a while back.
Top

Do you have the PCB traces fro that Richard?
Top

2nd on the one from synthcube. Great module.
Top

Thanks guys
And am I right in saying the wogglebug is essentially inspired by Buchla Source of uncertainty? I see that SOU is also available to DIY in different guises. Can anyone give me a brief comparison of the 2? Which is better?
Top

tardishead wrote:Thanks guys
And am I right in saying the wogglebug is essentially inspired by Buchla Source of uncertainty? I see that SOU is also available to DIY in different guises. Can anyone give me a brief comparison of the 2? Which is better?

I'd say that the SOU sort of combines a NoiseRing and the WoggleBug. The WB is more like a chaotic oscillator, whereas the NR is a random sequence generator. I have both the NR and WB in eurorack format and I also wish I had bought a Sputnik SOU when Roman offered them in MU format.

You can, to some extent, emulate a Wogglebug but you will need lots of modules. The "upper section" (referring to the old Makenoise WB) is basically a S&H circuit which takes noise or an external signal as its input (with variable gain); the output of the S&H gives the "stepped CV output" and is also run through a slew limiter to obtain the "smooth CV output". The smoothed CV is then used to control the frequency of a squarewave VCO resulting in the first "VCO out". That's just the upper section.

Then there's the lower section, whose inner workings are even less clear to me. I think it all starts with a burst generator (it generates random triggers kind of in sync with the main clock). I think the burst output is used to trigger another S&H / slew limiter block which samples from the smoothed CV output to give the "woggle CV output". This output is used to control the frequency of a second square VCO. And finally, the outputs of both VCOs are pseudo ring modulated by running them through a XOR gate to obtain the "ring mod output".

So, you get 3 CV outputs and 3 VCO outputs, all of them somehow correlated but not the same.

I tried to emulate the whole thing in PureData once and it wasn't so bad. Results were similar but not as lively. The tricky part is the burst generator, which I don't have a clue how it really works.
My music website | My modular blog
Top

I've got both a SOU and a pair of wogglebugs, and to my ears they're quite different things. Both are quite useful, and neither could replace the other as far as I'm concerned.

Here's my dual wogglebug, with a bunch of extra doodads - 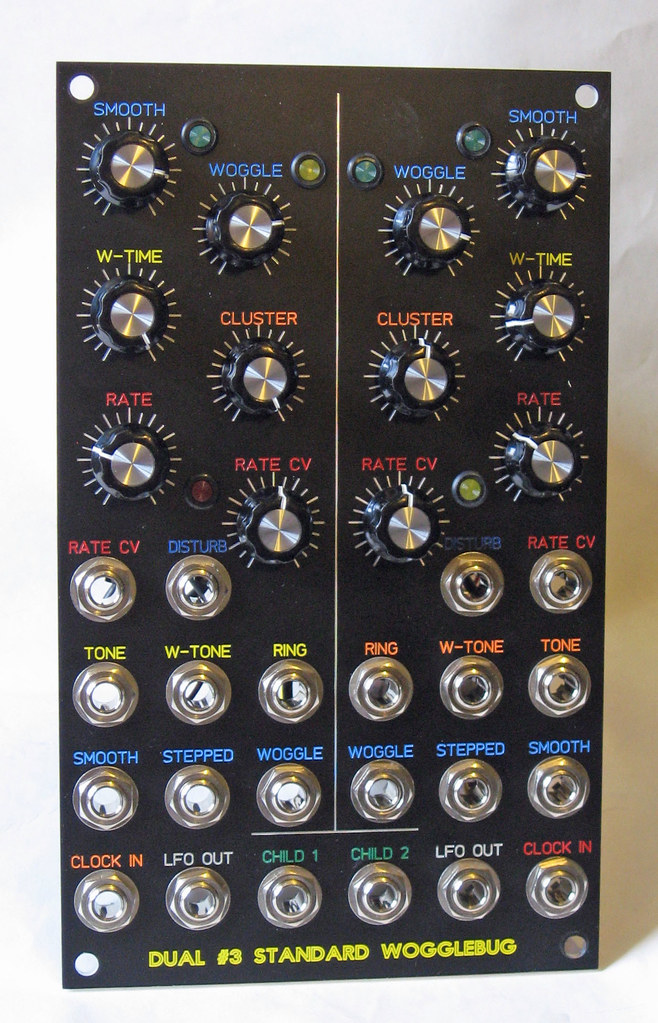 I actually built a bunch of these - don't really know where the other ones ended up, they've all been sold by the original buyers. Each one was slightly different.
flickr cloud of sound touyube NOT A MODERATOR ANYMORE
Top

Analog Craftsman converted a WB to MU and I have ended up with it.
If I have water in my ear, is it safe for me to listen to electronic music?
Top

Ben at Re:Synthesis used to sell panels & brackets for the Wogglebug in MU, perhaps he still does.

Mine is next to one of my MU SOUs. I don't find there to be a large overlap between them, despite the fact that the Wogglebug was partially inspired by the 266.
Top

thanks everyone
So I guess the consensus seems to be I need all 3 - WB, SOU and NR
Top

Do you have the PCB traces fro that Richard?

If you look at the photos, it's built on a SynthTech prototyping board. All hand wired. All the schematics are there, though, if you want to copy them.

Unlike some wogglebug circuits I've seen, mine has two separate sample & holds, one for the Smooth and one for the Stepped.
Richard
https://www.pugix.com

"Everything in our world is actually always modulated by everything else." - Peter B
Top
Post Reply
14 posts • Page 1 of 1