#List of rare and freaky synths and how you'd value them**

Granted there is 750 of them, but I think the Grendel Drone Commander v1 deserves a spot on the list. They pop up on ebay and reverb here and there but still sell for a decent amount more than they did when new and in production. Its such a lovely and unique synth.
Top

MPC Electronics MPC-1.
They made a couple hundred. It's kind of a one trick pony but has it's own sound sort of. Also has a built in computer/sequencer interface (I have the 1984 Timex/Sinclair computer as well).
I value at $1500 for the whole package in excellent condition, 25% because of it's sound & performance, 75% because of it's rarity and it looks cool. Soulsby Odytron special edition - only 150 made.
Rare to find someone who's even heard of it let alone has one, one of my "keeper" synths for sheer idiosyncrasy of the little beast! 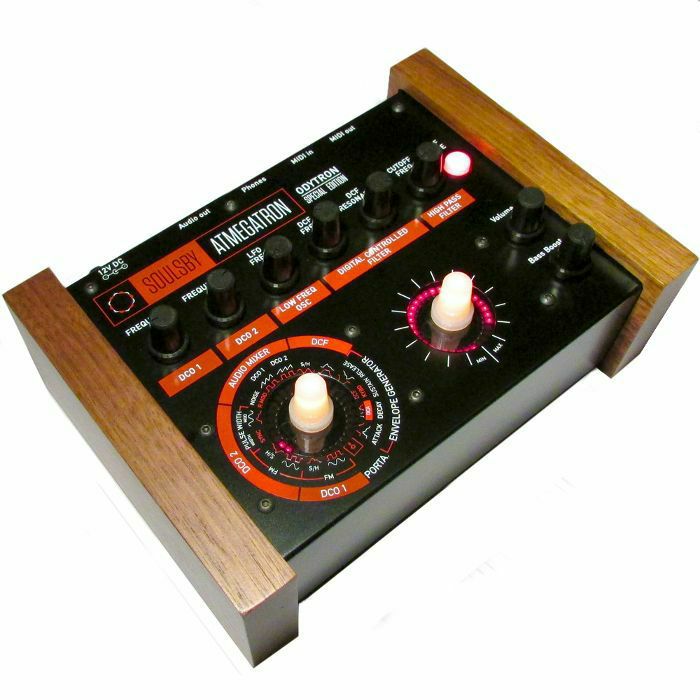 Regarding the Knas Ekdahl Polygamist, 53 or 54 were manufactured. The price has increased over the past couple of years from $2200-2400 18 months ago all the way to $3k+.

It is so densely packed with functionality that it really is still a good buy at the $3k or so price range but that really goes against the ideas that Karl had in mind when he designed/built the Polygamist.
Top

Another rare one, not mentioned yet-Gleeman Pentaphonic. Only 30 made in black, 20 with a clear plexi control panel (check out the clear "gumdrop" knobs on the pots!). 3 VCOs, 3 octave keyboard.
Vintage Synth page with specs and pics: Gleeman Pentaphonic One of the black models was sold on Reverb earlier this year for $7K (by Switched On in Austin, TX)
“If you look for a meaning, you'll miss everything that happens.” - Andrei Tarkovsky
https://soundcloud.com/nostalghia70s
Top

so my guess is there are about 100 around today

I don't know whether it counts, as it's not modular, but my favourite obscure synth (which I am lucky enough to own an example of) would be the Technomage Little Infinite Frequency Expander.

I have no idea how many were made, mine was manufactured in 1996 and I believe that they stopped being made in 1999.

Anybody else got one?
Random is the new maRnod
Top

my favorite obscure/rare piece, and one i was chasing for many years, original PPG Wave 2. arround 200 made or less, afaik.


EMM Spectrum... electronic magazine diy project. all early CEM based, sort of a Pro One with 3320 wired as SVF. stupidly sold it long time ago.

I can't recall the name, but in the 1990s there was a modular synthesizer company that sprang up I think in New Hampshire USA. I think it started with an "E", like Evol or something. I have the sheets with the specs for each module around here somewhere. I don't know if they actually went into production.
Top

Evos. Could have been interesting. Pix of modules here:

so my guess is there are about 100 around today

funny enough, with about 2 dozen synths and 600hp of euro this 8 step synth has an exceedingly unique character...[/video]

hey, cool! my good friend sent me one of these a couple months ago, but i'm yet to dig into it. he's close friends with the maker and the one he sent me was iirc the first complete proto featuring a mirror finish. nice to see them mentioned on here.
Top

Does the 150 pieces listed for the JoMoX SunSyn in the OP include the Mk2's? IIRC only 25 or so of those were made. I own what's possibly the last one made: 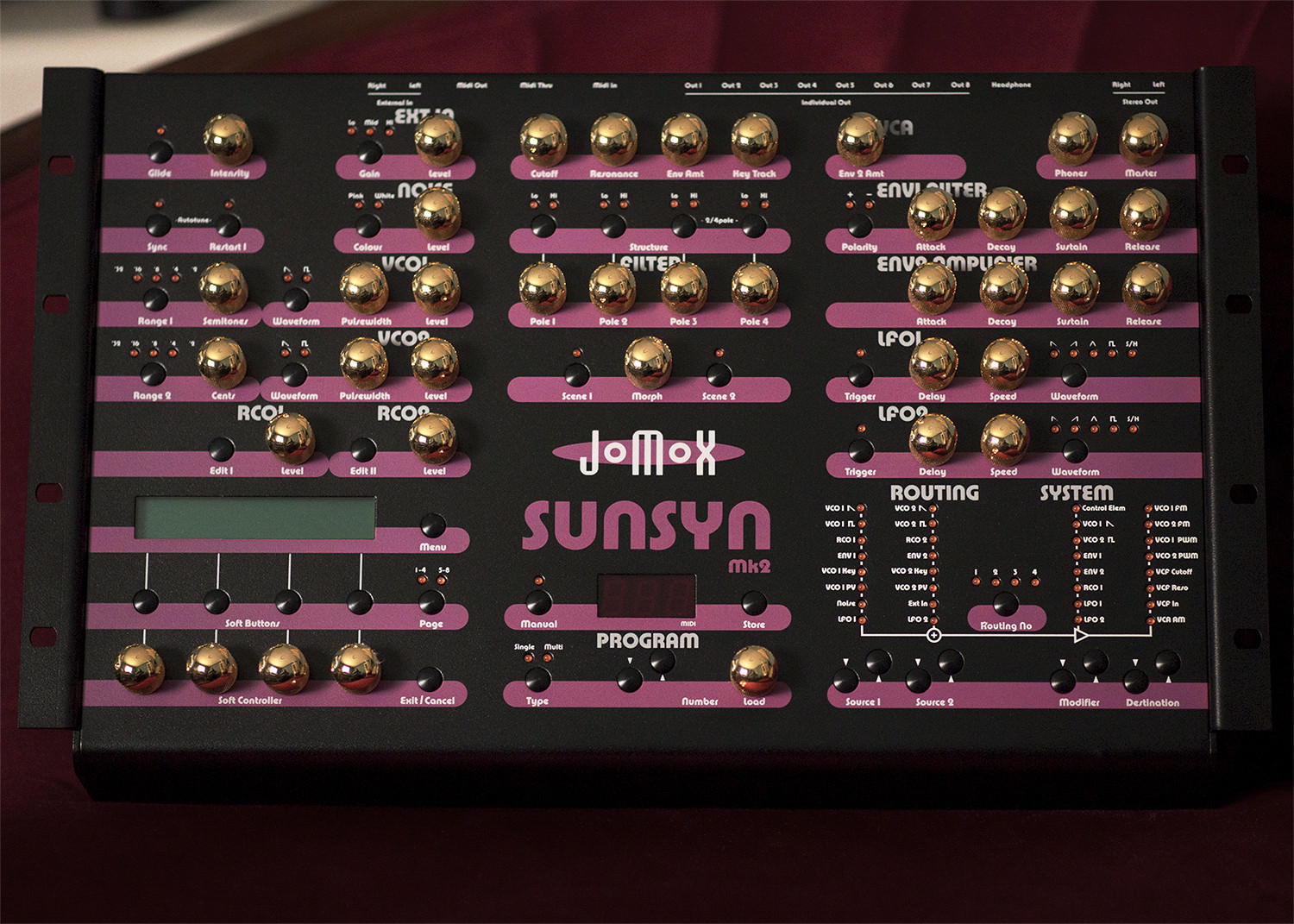 Two EXPENSIVE tube run rarities that I would kill just about anyone to obtain... but please, do let us know if you own one!

Knifonium is a very carefully designed synth for many purposes, small and light enough to take to gigs

I once had the fortune of owning a Sequential Circuits Prophet T8. I thought I remember hearing that it had a low production run (under 200?). I didn’t think that the sound was that amazing. I think that most of the sparkle of that synth was in the keyboard.
Top

Though desirable and rare the keyboarded Fizmo is more common and as far as I know the same engine.

I'm sure the Peavey things were prototypes

Fenix - while commonly credited to Synton the synths are actually labeled "By the Original 1973-1989 Synton Team" this might be significant as Felix Visser, who ran the company but was not involved. He is developing a keyboard synth now as Syntonovo and showing prototypes at Superbooth.

Fenix III is a big sequencer, not a synth per se. I've heard 25 or less presumably due to cost of buying both at the same time.

Yeah I guess like 5000 euros each but can vary due to not often coming up for sale often and someone selling one lower because they need cash fast.

EML 101 was built for quite a few years and supposedly around a thousand were made so not all EML qualifies as under 500. Agree with the number of around 100 for the EML 100, though they seem to change hands more often than many synths with that kind of number.
http://nickkent.net
twitter youtube more youtube soundcloud
Top

RMI Harmonic Synthesizer -- less than 50 units made, at a guess (first unit made seems to have been #101, according to the service manual, last number known is #140).

RMI KC-1/2 Keyboard Computers seem to be fairly scarce as well but they are definitely more common than their Harmonic Synthesizer.

PPG 1003 Sonic Carrier -- apparently, five or six examples made altogether, plus perhaps the odd one without keyboard, mounted into a 300 modular case.

PPG 340/380 -- seven or eight units altogether. How many of them actually worked I don't know.

The Exclusively Analogue Aviator apparently wasn't made in huge numbers either. You do not have the required permissions to view the files attached to this post.
Last album:
https://davidmorley.bandcamp.com

Synton Syrinx was made in a keyboardless edition of around 10

Hopefully they'll make a kb-less edition of the new Syntonovo PAN, and make more than 10. That thing looks incredible but I have no idea what it might sound like.
Top

Synton Syrinx was made in a keyboardless edition of around 10

Hopefully they'll make a kb-less edition of the new Syntonovo PAN, and make more than 10. That thing looks incredible but I have no idea what it might sound like.

Soon I’ll be able to demo one