For a techno artist of his years and experience, Anthony Child caught the modular bug late. "I wasn't really that interested in it because it seemed like you had to spend thousands of pounds to make a very basic kind of 'clip-clop' sound, and that didn't really appeal to me," he once told XLR8R. But after years of working primarily with software, his routine started to feel too comfortable, and the modular seemed like a good way to shake things up—"like throwing a wild animal into the occasion," as he put it. Once he made the plunge, racks of blinking lights and colored cables became central to his craft. In addition to what he's got in the studio, he carries a portable rig in his carry-on luggage, and has even started incorporating it into his DJ sets.

Far from basic "clip-clop" sounds—or the kind of meandering self-indulgence many people think of when they hear the words "modular synthesis"—the music Child wrings out of his little kit is rich, varied and artfully composed. In this edition of RA Sessions, colorful, dynamic rave tracks seem to emerge fully-formed, though in fact the performance was "completely improvised with nothing prepared beforehand." The result makes a compelling case for this approach to playing live, and offers a peek at the perpetually evolving methods of a techno luminary.

Great work. What did you use to interface your Octatrack with the modular?
shedding . http://www.shedding.org .
Top

Great jam Anthony. What i don´t get. How do you mange to get so many sequences / or sequencing so many synth voices with only one sequencer (turing machine) ? I count three. telharmonic, m303, Loquelic.
Top

Made me go dig up my old Surgeon vinyl... great stuff. (And memories.)
www.manhattananalog.com
Top

@sellanraa
audio sample of modular pulse played by Octatrack and routed to headphone output then into Circadian Rhythms clock in.

Ah the mighty Octatrack. Thanks ! Cya on 11th December in Hamburg !
Top

Awesome! Thanks for sharing!
Top

got a modulargrid link to your setup there? 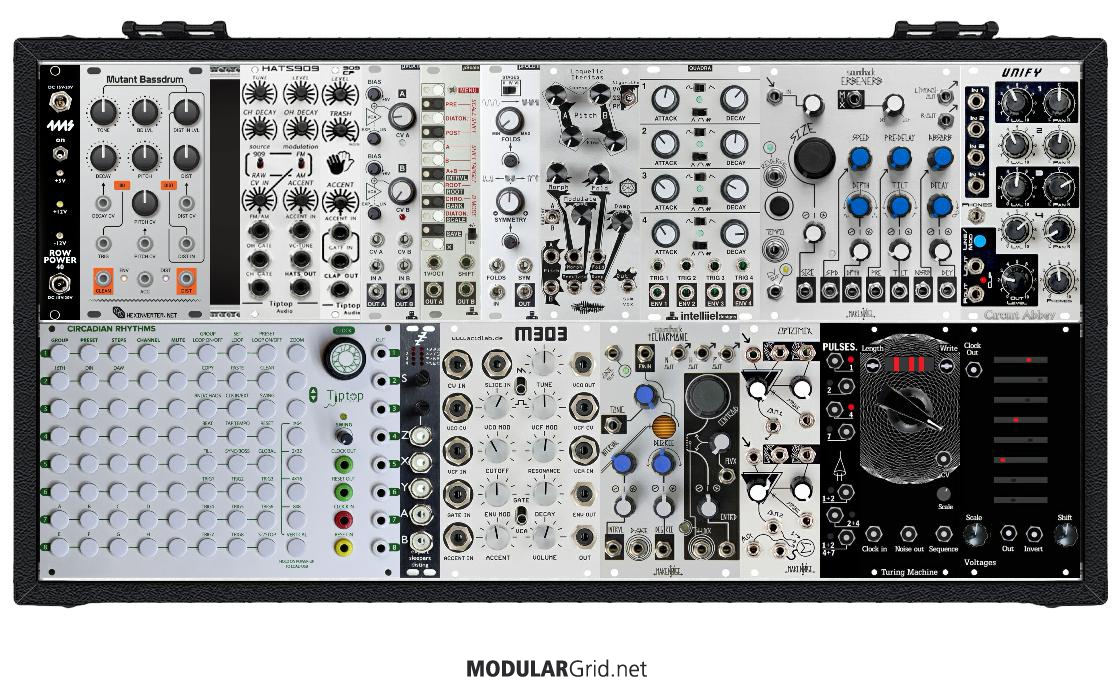 Cool- you really manage to do a lot from 6u.
Top

at 4:30 unleashing the shuffled maracas-like sound was refreshing

wonderful work on the music machines.
maybe only wished during the listen for a floorboard shaking upheaval of a sparse bassline, in search of the elusive brown note
https://soundcloud.com/rhythmdial https://www.instagram.com/rhythmdialtechno/ https://rhythmdial.bandcamp.com/
Top

This was a really fun listen and watch! Great idea routing a clock pulse to the headphones out on the Octa. Going to have to try this.

awesome! great to see your modular techno sets and see the modulargrid - very cool and inspirational. ive made a switch from lots of hardware to a modular briefcase and im trying to wrap my head around the live pa approach which of course you nail (with a very similar rig). so anyways, thanks - you rule.
Top

Hi Tony, What case are you using???
Top

Nice one!
Using the Ot as a looper is a pretty good idea indeed!
Last release :

the whole collection of tracks in this session reminds me very much to older surgeon classics on tresor and downwards.

is it meant to be like a re-engineering of moments from the past or did you "just tweek knobs", anthony? great session!
Top

@Phasor
The case is a prototype that's not in production yet. Will give details when it's ready.

@exportexport
The whole piece is just live improvisation. I guess the raw, direct nature of that sounds more like my earlier productions. I'm really enjoying performing in that really raw improvised way at the moment.

How many hours do you practice?
splitradix.bandcamp.com
Top

So do you practice the Octatrack ? Do you plan using it more than just as a looper ?

The OT is a fantastic machine and it's hard not to like it, experimenting and manipulating sounds. I want to hear what you can do with it !
Top
Post Reply
40 posts