Wiring should be center positive. I used a DPDT switch for on/off, to make/break the connection between both wires on the DC jack. For a brick, I think they recommended 300mA or above.
Top

Thanks. It’s alive! Though I’ve got to troubleshoot the distortion mix, sound cuts out when going CW. Probably my wiring.
Top

Found a 100uf electrolytic cap installed backward in Distortion circuit. Replaced and reference voltage normalized to 5.8-6.4 though when both pcbs are connected that voltage drops to mV. This is in the corner with ground on the spacer hole. Also, after the correction, the 5.8 test point right next to the 6v test point is now super low. Never had any smoke or anything, just the distortion knob not doing anything. No difference in function after the change, everything seems to work except distortion.

So did I damage some neighboring components? I’m tempted to rebuild the entire section.

Thanks for any advice.
Top

Alfrede wrote:Hey Master G, one question which Version Number is on your PCB printed, in my Version 2.6 i have 0.22mMP printed and 1,2nF printed and 2,2mF for an electr. electrolytic capacitor. I later took pictures of them. Hey Alfred!
Thank for your reply)
Now I understand some discrepancies) It is simply the older PCB Ver. I have V2.2. SO yes, it is a bit different from V2.6. Got confirmation from Vlad already.
piece

Hey guys, just finished my kit and it doesn't really work. Never done anything other than simple circuit bending before so I didn't even expect it to make noise.... I'm gonna outline what are probably really stupid beginner mistakes, any help is appreciated. I'm probably just going to pay somebody who knows what they're doing to fix it, I really only got the DIY kit because I thought it would save money and Vlad was out of prebuilts at the time

1. all the voices leak when Hold is turned to 0, at low volume. Voice 2 leaks at full volume. I already tightened the sensors.

2. The delay circuit doesn't do anything. I can sort of hear something as I turn the mix knob but it's definitely not the delays. I wore a static bracelet, is this just a dead chip issue?

3. I hear humming noises whenever I touch a knob or switch. This sounds like a grounding issue? I used a PVC enclosure because I don't have a CNC to mill an aluminum one. Was that a bad idea?

4. the Pitch 1234 knob cuts the audio from that group when I turn it CCW

5. Headphone output doesn't work, there's an extremely loud hum and you can just barely hear the synth. Also a grounding issue? I don't think I understand what grounding is to be honest. Not my highest priority to fix but it's the first thing I noticed. Regular output seems fine, so does the input. Haven't tested the CV because I don't have anything that sends CV.

6. The timbre is ass. Thin and reedy, not like the demos at all. The only time I didn't follow the directions exactly was when they asked for a vintage cap, I don't live in Russia so I don't know how I'm supposed to get a soviet capacitor. I used a new one with the appropriate stats from Digikey. Did I fuck myself on this?


If anybody can point me in the right direction on any of these I'd be super grateful, this has been such a frustrating build and I want it done so I can use the table I'm building it on to actually play music on, I haven't been able to jam with my other gear in months.

take hi res pictures of the boards and post them here. The problem is not from the PVC case though.
http://soundcloud.com/bytecas
http://bytecas.bandcamp.com
Top here's all the pictures I could take before my camera broke:
found the 1-2 hold switch and the total FB switch weren't soldered correctly so I fixed those, re-seated the delay chips... now voice 2 stopped leaking at full volume (Still leaks quietly), Voice 1 doesn't work at all except for faint leaking, the delay still doesn't work and now the external input doesn't work. If anyone is in Colorado and wants to make some money fixing this let me know, I don't know what else I can do here because I don't have a multimeter or anything besides a soldering iron
Top

What voltage should one be getting on the vCC+ And vCC- pins? I’m getting 12v and essentially zero on the neg. using 12v 1A center + switching power supply.
Top

I'm sourcing the components for my Lyra-build and am having a hard time picking the right pots. I've seen the Mouser BOM, but as I'm in Europe I wonder if anybody has successfully sourced the pots from Reichelt or Tayda?

Hey Bjarne, i have got my pots from here https://www.musikding.de/Potentiometer-16mm_1
Top

I also used Tayda for the pots and a number of the ICs too. Works great.
Top

Thanks for the good tips everyone.

I think I’ll have a go at finding all the right pots at Tayda.
Cheers
Top

Got my Lyra-8 kit working, yay! I laser-cut an enclosure using 3mm/5mm acrylic and two colour laser etch laminate for the panel. The enclosure feels pretty good but at first all the voices were always on.. couldn't get to the bottom of it without schematic but eventually worked out that the black layer on the acrylic front panel is CONDUCTIVE! wtf? a few nylon washers and end of a a drill bit to make some clearance round the holes and now it works! one of the pitch knobs isn't working but I'll look at that tomorrow - time to play!

The design files are here if anyone interested Github That looks really nice, great job! In case anyone else has troubles with a conductive panel, I suggest using a 12”x12” sheet of kapton film. Then you don’t need to worry about the extra spacing caused by washers.
Last edited by secrethero303 on Thu Dec 20, 2018 7:06 am, edited 1 time in total.
Top

I'm sourcing the components for my Lyra-build and am having a hard time picking the right pots. I've seen the Mouser BOM, but as I'm in Europe I wonder if anybody has successfully sourced the pots from Reichelt or Tayda?

Ordered two sets of pots from Tayda last week. They have everything. They didn't have a couple of the switches though
Careful now
Top

I ordered all pots and switches from Banzai.
https://www.banzaimusic.com/home.php
Top

Hi everyone, I recently purchased the Lyra-8 diy kit and went to work. I found this forum because I had questions along the way, and this has been a great resource here! I haven't tested it yet, just waiting on a the switch and last few knobs. And then the face plate and case!
I'll probably have some questions before I'm finished and just wanted to get a hello out there!
Top

Everything works! No voices triggering all the time. I was worried since I don't have any Kapton film. But I coated the hell out of the underside with a matte coating, and it seems to have done the trick. I also used shrink tubing around each knurled screw. alongside some plastic washers.

Now I gotta figure out a case to go along with the panel. Should have updates this coming week. 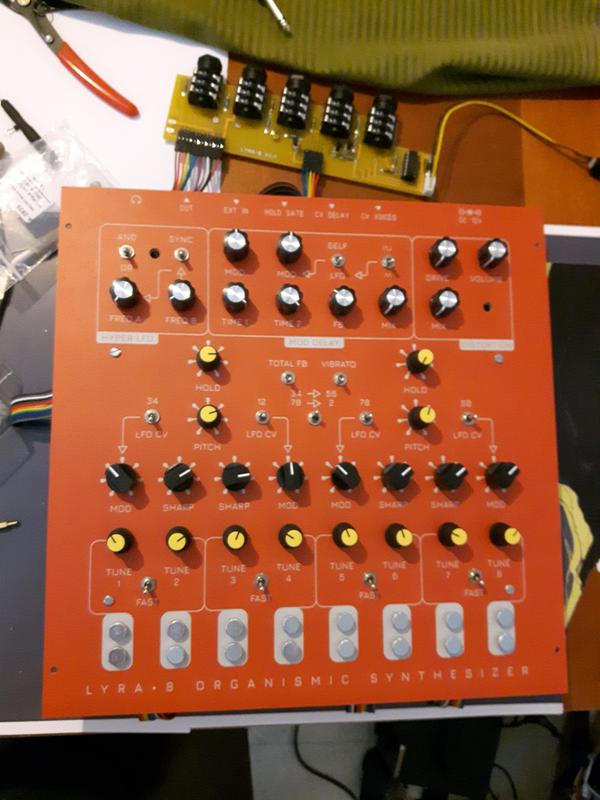 Edit: and I must say I like the orange color
Top

Just finished two lyras. Surprisingly both seem to work...except when engaged one of the leds stays on regardless of speed setting. The lfos themselves appear to work. I've reflowed around the area. Any thoughts where I need to look?

4floorsofwhores wrote:Just finished two lyras. Surprisingly both seem to work...except when engaged one of the leds stays on regardless of speed setting. The lfos themselves appear to work. I've reflowed around the area. Any thoughts where I need to look?

What a wonderfully crazy machine

The LED on the right side is just for power. It lights up with the machine is on, it sounds like everything is working for you.
Top

Sorry I didn't explain very well.
I built two machines, one works perfectly. The Lfo led on the second one stays on when engaged whereas it flashes as you'd expect on the other machine
Careful now
Top
Post Reply
449 posts