Hi, built marbles awhile back and eventually sorted out my problems with your guys help!

Reason for post is my uncertainty in whether or not i have calibrated my marbles correctly. I used the guide provide by forestcaver https://github.com/forestcaver/Marbles-panel

I tried the method but i am not very confident it has worked correctly. I was confused by the process and wonder if anyone could do a video or talk me through what i should be looking for at each step. I am okay with the volt/oct setup using 1 and 3volts.

When i turn the pots looking for close to 1 or close to 3 i am unsure if over 1 or over 3 counts as these values are not seen in the files provided. It seems kind of arbitrary at times (obviously my lack of understanding of the process) where the 1 volt or 3 on the volt/oct is quite discrete and easy to achieve.

Could anyone explain to me why the calibration by forestcaver takes the form it does? Or how the spreadsheet formula is derived.

collumn2016 wrote: Reason for post is my uncertainty in whether or not i have calibrated my marbles correctly.

When i turn the pots looking for close to 1 or close to 3 i am unsure if over 1 or over 3 counts as these values are not seen in the files provided. It seems kind of arbitrary at times (obviously my lack of understanding of the process) where the 1 volt or 3 on the volt/oct is quite discrete and easy to achieve.

Could anyone explain to me why the calibration by forestcaver takes the form it does? Or how the spreadsheet formula is derived.

Outputting 1v and 3v - those knob and button settings tell marbles to output octaves so you set the knobs to get marbles to think it is outputting exactly 1v and 3v. You then measure the error.

The calibration takes the form it does for several reasons:
1. You need to calibrate the module, otherwise it is pretty useless as a quantised sequencer
2, MI didnt expose the calibration in the user interface. I believe because there were a lot of support calls and very few people have voltmeters of the required precision and accuracy.
3. I’m lazy and only really care about diying a few personal modules and this was a quick easy hack to get my modules calibrated
4. A more general purpose calibration routine would be to either use the serial port and drive the factory calibration code directly via some wrapper harness program (I actually did this when experimenting as well but it’s not usable by anyone else and I lost interest in tidying it up). Or you could edit the firmware to present a ui within the module for calibration. Originally I just hacked the firmware to directly output the voltages I wanted (which is what I did for stages and tides 2), then realised I could do it by adjusting the knobs and buttons. I have various hacks that output values on the serial ports for testing....
5. The original notes on how I calibrated it were very terse. Bu Ma took those notes and wrote the detailed pdf I placed on the github. I have no interest in writing long notes or providing support! I just shared what I did.
6. These modules aren’t really designed for diy so you are on your own a bit really.
7. Most of the fun in diying the MI stuff lies in figuring out what it does and why it does it. The learning bit is the most important part for me... Without that element, I think it’s better to just buy the factory module - far less cost in time and risk! I dunno - having a video to walk through all this seems just wrong to me :-)
8. Obviously these are just my personal views - but you did ask :-)

The spreadsheet is just used to derive the linear dac offset and scale from the two point values (each of which has a coded dac value that corresponds to that value) you have measured (derived from what the firmware does). It’s pretty self-explanatory, isnt it?

Ps. Should this be in the *unsuccessful* builds thread ?
Top

Hi Forestcaver, been a few weeks now. Got a new meter and it is a 50,000 count one and 5 digits. Tried the calibration again and managed x1 through x3 okay but couldn't get the y to behave like the rest. When i set it up as described i tried changing the bias but the voltage would not change. I played around with the rate as suggested but i couldn't get a change in voltage as i had had with the others. The module seems to play in tune but i am not 100 percent sure, i compared some of the note sequences from ben's very thorough video and it seems to behave the same. Thanks for your explicit explanation above and appreciate your time. I don't know how to move it to unsuccessful builds :-). I agree yes we have to try and work out what is going on when we build these modules but my leaning is more towards using them creatively. Especially this module and similar ones too. I love generative music and they are very important to me and my system i built for this. Take it easy and thanks again.
Top

Hate to bump this bad boy, but I'm super happy this one turned out, thanks to forestcaver for the calibration instructions! One of my new favourite modules:

Branches and Ripples done!
Braids and Clouds up next Question for those with working DIY Stages:

Does the "B" buttons take only 1 sec to put segments in looping mode?!
Mine take a lot longer (4-5 sec) but apart from that the module works fine

Cycling thru green, yellow and red modes is instant so no worries there it's just the cycling mode that takes longer.
Top

belzrebuth wrote:Question for those with working DIY Stages:

Does the "B" buttons take only 1 sec to put segments in looping mode?!
Mine take a lot longer (4-5 sec) but apart from that the module works fine

Cycling thru green, yellow and red modes is instant so no worries there it's just the cycling mode that takes longer.

Built three - all 1s. Just checked the latest mi fw - it should be 1s as well. Have a look in ui.cc and see what your duration is set to....
IIRC (vaguely) someone released a hacked fw that took 5s as they wanted it a bit longer....
Top

I thought that there must be a clock issue since the "1000" might not mean anything to my MCU and presto!I just found what my problem is..

My crystal does not oscillate at all..

Tried a different crystal, same thing..
Tried a thru hole crystal on the pads that are not gnd same thing too.:')
I entirely removed the xtal, turned on the module and behaves exactly like before.

So I have a working stages without a working clock

edit : It was the orientation of the 100R resistors..Now it works fine.

Here's a nice pair of shades!

20200124_104543.jpg
I've had these in the build queue for 9 months. So proud of these babies! Very easy build!
You do not have the required permissions to view the files attached to this post.

Eurorack is an exercise in delayed desire.
Top

Here is my current setup, I've build Veils and Ripples that sit at the upper right of the case… first time that I do SMD soldering.
Out of frame, there is a digitakt for drums.
Which modules would you add in the free space?
I eventually look for an eurorack sequencer because I don't always feel comfortable handling the beatstep pro, the digitakt sequencer is good, but I find it painful not to have scales mode. I hear about the Hermod, this one seems to be a good companion of the digitakt…

IMG_1296.JPG
You do not have the required permissions to view the files attached to this post.
Top

Maybe the most unusual Braids build.....

It's inspired by and I referenced this project.
Top 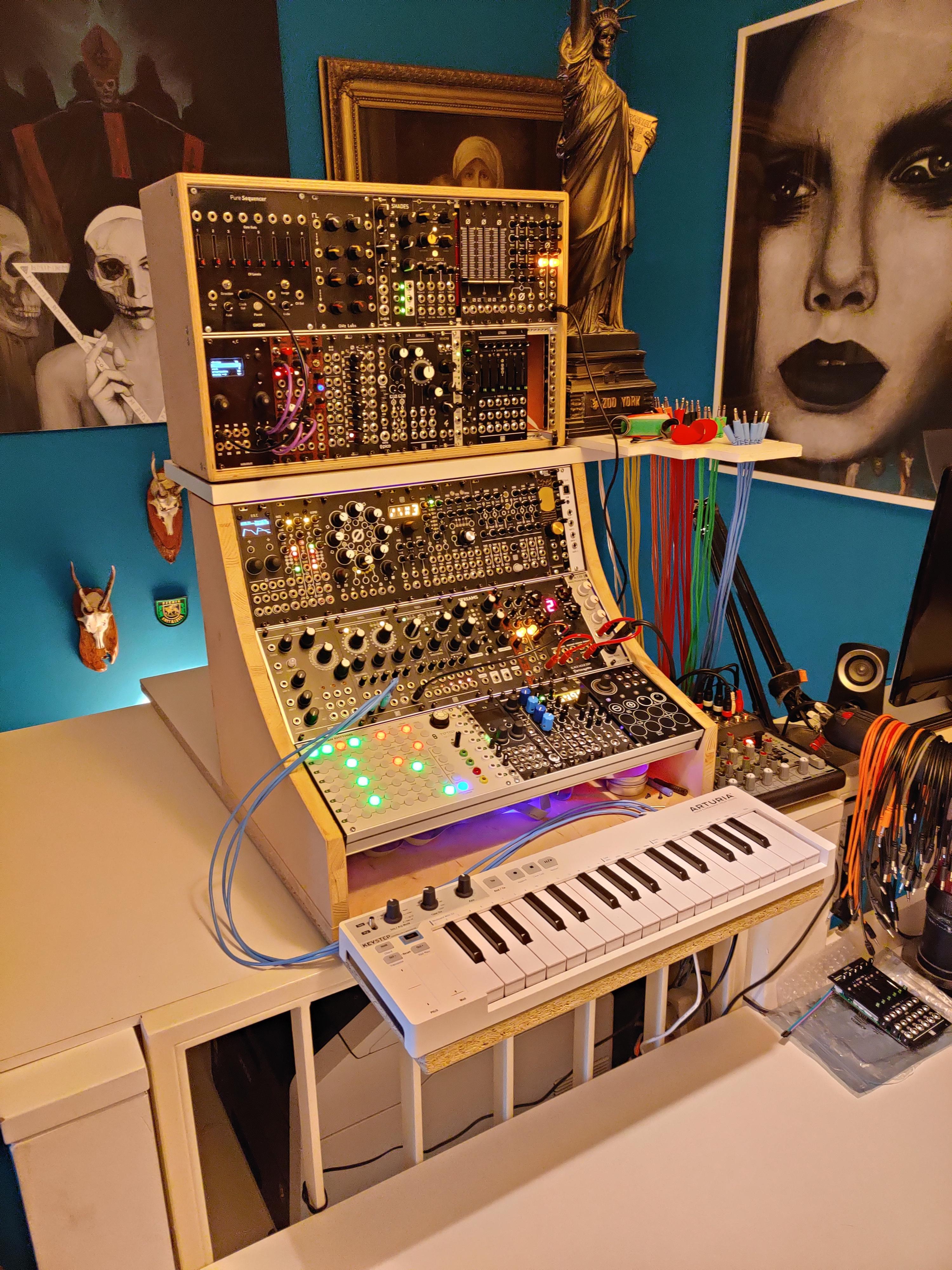 My first Mutable build, really pleased with the end result. Board and plain metal front panel from Amazing Synths, great service, fast delivery and useful supporting advice. Many thanks Adam. Only my third SMD project, it really stretched my abilities but I like a challenge. I don't think I will get into anything that uses smaller components than this but I am looking forward to building a Tides module.

The front panel cover was printed on Vinyl Matte self adhesive paper, I think it works quite well. I couldn't get Green display panels so I got yellow instead, they are quite bright but are actually OK. I had some frustration identifying a suitable encoder, in the end I went for a Bourns PEC11R-4220F-S0024, the bush length on this is just too short to get the front panel nut on, but it works with a little squeezing of the PCB toward the front panel, enough to get the nut on a couple of threads and hold it firm. The attachment to the front panel with the nut is essential to stop the PCB flexing when pressing the encoder switch.

Setting up the Mutable development environment on my PC was a lot easier in practice than it appeared at first sight and I invested in an ST-LinkV2 and the Olimex JTAG-20-10 converter cable. After a couple of false starts, I needed to build the Yarns bootloader before running the overall Yarns makefile and provide the module power from a Eurorack supply, it ran without error and downloaded the image to the micro-controller. A quick re-cycle of the module power and there it was!

Calibration is straight forward and is now done. My only negative observation is that the Mutable documentation doesn't appear to accurately reflect the functionality of the version 1.5 software that I've installed, some of the menu items and options have changed, I assume for the better.

IMG_0721 (2).JPG
You do not have the required permissions to view the files attached to this post.
Top