I thought I'd post some details here about a new version of the 265 Source of Uncertainty I've made up, based on Non-Linear Circuits' Sauce of Unce. I've made a few additions and changes of my own too:

- Each Smooth and Stored section features a trigger output, which fires when the random voltage goes above 5V (theoretically 50% of range, though the gain is somewhat difficult to set precisely due to it being a random module). These trigger outputs are proper Buchla triggers, with the gate portion of the trigger going low when the voltage has descended below 5V.

- The LEDs show both the continuous CV output as well as the trigger state via the use of bipolar LEDs. This results in a pretty psychedelic look (woah man radical).

- The noise cores can be jumpered to refer to either Q or N grounds. The LEDs all refer to N ground, as per the Buchla "standard".

- Signal levels have been set for line level audio and 0-10V CV ranges from the Buchla +/-15V supply. However, the noise level is trim-able so can boost levels down the chain. I need to finalise resistor values here before offering a final BoM, but that won't be much of an issue at all.

- The noise cores are pretty susceptible to clock noise. I've provided examples of this in the audio demos below, in what I believe to be the worst-case scenarios. From reading the limited info out there about the 265, this seems to have been a "problem" with the original module, and from speaking to Andrew at NLC, it's also present in the Sauce of Unce design. However, if clean noise is desired, the clocks can be slowed all the way down to near-off - this is also present in the demos. Also, the clock bleed becomes far less noticeable once the noise sources are filtered and/or gated.

- Due to the nature of the Smooth section, it is possible for the outputs of these sections to go ever so slightly negative. This isn't a problem for me, as my system is fully analogue, but digital users beware(?)

Why the 265 you ask? Simply because I found I had a panel for the 265 from my small Buchla-kit-collecting-frenzy. Throughout lockdown, I managed to build up all this Buchla kit, but decided to do my own layout for the 265 due to the exact issues Andrew at NLC describes here. I've spoken to Andrew and will be offering him a royalty from the sale of any of these boards, which isn't something he demanded whatsoever, but something I pushed to let me give him.

I'm offering bare PCBs at £30 each, and also offering a partly-assembled but tested board for £200 each, both prices exclusive of VAT and postage. For the latter, all you'll need to add is jacks + LEDs + power + a panel + knobs - therefore a pretty easy DIY job. I'll get to work on an online ordering system now, but I'm accepting pre-orders now, with the idea that everything will start shipping at the end of October. I'm also talking to Julian of The Beast about offering a board + panel combo.

Do please answer below if you're interested - it would be great to have a rough idea of numbers for ordering PCBs. 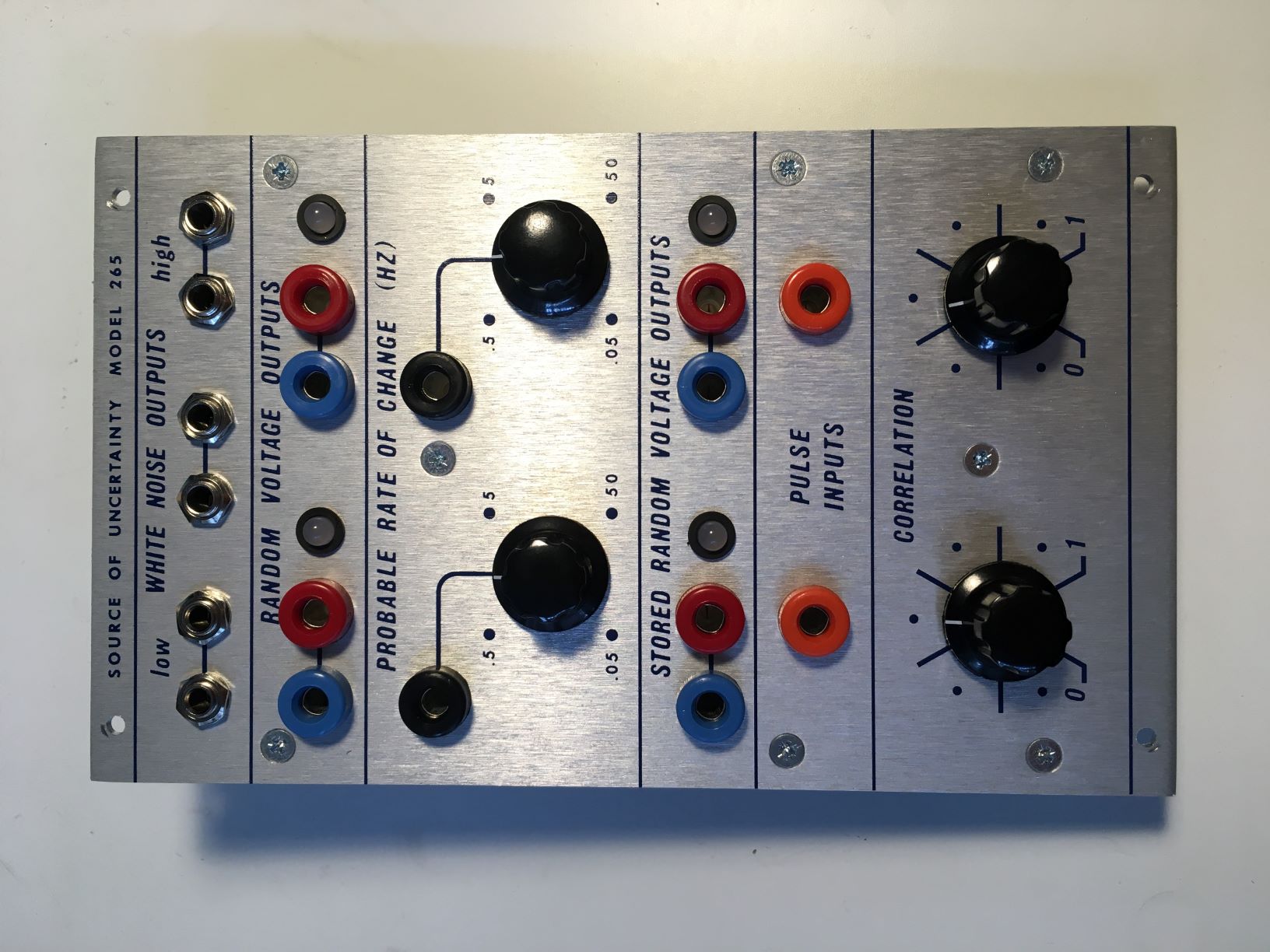 I understand you've used a 265 panel you had already for the module in the pic. I hope any future panels will not be direct Buchla clones. Don's Panel designs were one thing he for sure did not appreciate having cloned.<--Don personally said this to me.
Top

I understand you've used a 265 panel you had already for the module in the pic. I hope any future panels will not be direct Buchla clones. Don's Panel designs were one thing he for sure did not appreciate having cloned.<--Don personally said this to me.

Thank you! Yeah this is the one and only Buchla project I’m looking to take on - the 265 fills the last space in my rack and I wanna keep it to two rows

suggestion...to avoid the design police you could shuffle the layout a bit around.
I'd suggest to group up the input bananas to the left, output to the right audio in bottom and audio out top.
Like a 292ish
Or bundle them all up like we do on the h series...
Like that it is easier to operate and its your own take on a classic and not a replica.
Top

suggestion...to avoid the design police you could shuffle the layout a bit around.
I'd suggest to group up the input bananas to the left, output to the right audio in bottom and audio out top.
Like a 292ish
Or bundle them all up like we do on the h series...
Like that it is easier to operate and its your own take on a classic and not a replica.

I totally understand... but this is how the original 265 panel was

I don't particularly want to re-do the panel layout, mainly because the reason I designed the board in the first place was to put some electronics behind the 265 panel I had somehow acquired. In doing so, I thought I may as well open the project up for public sale - Andrew at NLC's cool with this and he's getting a royalty - and it also pushes sales for 265 panels.

@ArguZ
I'm wondering if Don Buchla himself had posted what I wrote -about what he *did* say- if you'd still reference it as "design police" ?

My comment stems from a phone call i made to Don to ask about re-making one if his older modules. True to form, his first reply was "Why would you want to do that?" The ensuing conversation made clear he was about doing something new vs re-doing something old. We talked awhile, during which he said it was okay to use the old circuit design -again saying but why would you?- but *not* to use the panel design. His emphasis on *not* -and the rest of the conversation- made clear what I wrote already.

We'd talked before that call, and after it. He was always a little miffed that the schematics had 'accidentally' gotten out into the wild when they were meant soley for tech support. But he knew the genie couldn't be put back in the bottle. Especially after one person to whom he had given a limited release permission, expanded on it -claiming his blessing- and ran multiple offers.

@Fin
wrote this as you were typing the reply just above. Responding to ArguZ, and I understand your module is about already having the panel in hand and working to put something behind it.
Top

Well, we can either let it die hier and get rusty or try to make the design style immortal by breathing new life into it.
1to1 clones should of course not happen to prevent ttownesque episodes.
Or building pseudo vintage modules from scrap piles.
Top

Wow - I just read the history on this, what a bummer
Top

@Fin
Yeah, We're *not* picking on you. But there is precedent for this to go the wrong way.
Top

Yeah I can definitely see how things would turn bitter in the Buchla marketplace... I'm rather new to this part of the synth community, and not one part of my system wasn't built by myself. Given the prices of modules alone, I can very much understand things going very awry if and when they do.
Top

Well given the electro music site Roman clones et al, this group should be the last to throw stones at a builder at this point. Let Ezra or BUSA follow up on any IP issues. I say if Findlay is so motivated so be it. Regarding design police - ha! It’s a free country in principal. Go for it man.
Beatniks and Bongos/Bagels and Bongos/Buchlas and Bongos...

@Minimoog56
Nobody's throwing stones at anybody.
electromusic site is directly connected to current Buchla IP owners.
Saying that others have done bad so there's no need to address bad is a false argument.

Finlay <-- no "d" just told us he didn't know of prior confusion and issues regarding panel design. It's not a mistake to make him aware of those.

You are correct that what happens after that is up to him.
Top

FWIW, I'd re-label it -any new panels- "Saucy Uncertainty" 265F or S or A <--Finlay, Shakespeare, or Andrew, respectively.

And then change any other labels if that makes then more in line with their 'Sauce of Unce' circuit origins.
Top

And then change any other labels if that makes then more in line with their 'Sauce of Unce' circuit origins.

Yeah I think this is what I've just come to realise - some of my wording here could be very misleading. Will edit that website soon and the top post now

I suppose you are referring to electricmusicstore.com; is that right? I was not aware of a connection to Buchla though I will confess I have not been following along with all the behind the scenes moves. What's the connection?
https://www.instagram.com/hollasynth/
Top

Yes. BUSA and electricmusicstore are owned-run by same entities.
Top

Oh OK, but Shawn Cleary/AnalogueHaven/EMS is not the same entity as Eric Fox/Foxtone/Buchla USA.

I wondered whether there had been some sort of formal IP acquisition/agreement made between the two parties.
Top

anyhoo welcome to our "wonderful" world, finlayshakespeare
This is not the place I'd imagined it to be.
Top

@Drillionaire
Considering who told me, I'll stand on my comment. But I'll say no more in this thread about it.
Top

As someone who helps manages Buchla IP, I'll trust myself over you.


Peake wrote: ↑
Thu Sep 17, 2020 1:28 pm
When you introduce something nice to the Buchla crowd and the conversation turns

Yeah this 'community' is a joke.

Wonderful module in OP. I mean that sincerely.
http://www.buchlarepair.com/
Top

all that aside, just wanted to say thank you for all your effort and willingness to contribute to the Buchla DIY community.

PCB ordered - can't wait to check it out when they're ready.

I thought I'd post some details here about a new version of the 265 Source of Uncertainty I've made up, based on Non-Linear Circuits' Sauce of Unce. I've made a few additions and changes of my own too:


Fabulous! Thank you for taking the time to share your adventures @finlayshakespeare - I dig it!