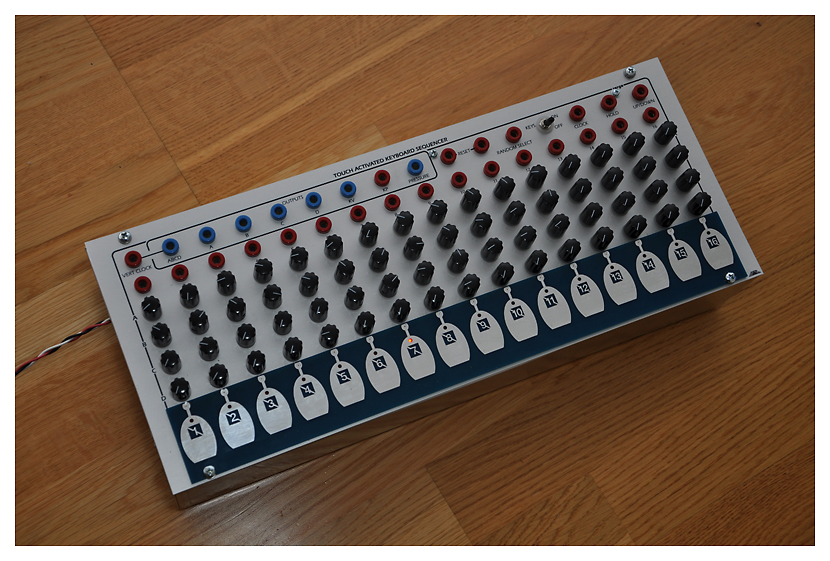 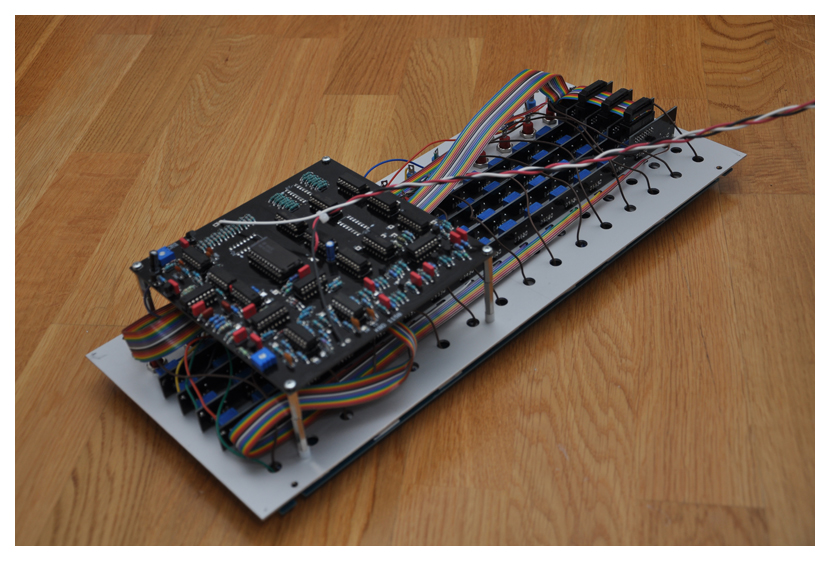 I've got an OK from Serge to do the TKB as a kit!

Wiring has been simplified by mounting all the pots to 4 different PCBs.

I'll make kits during the spring (So this'll happen sometime in April/May I think) and sell in the shop. The price will probably be something like 3000 SEK, but I haven't checked with suppliers and stuff yet.

This little miracle is a 16 stage sequencer with 4 layers, five simultaneous outputs, sixteen capacitive touch-sensitive keys. It is a sequencer and performance keyboard rolled into one. A four-stage vertical sequencer steps through each of the four layers, allowing sequences up to 64 steps in length. The Reset input brings the sequence back to stage 1. A switch and trigger input allow the sequence to go forward or reverse, a hold input stops the sequence. A random select input randomly selects from the sixteen stages. Sequences can range from 2 to 16 steps, or multiples of 4 through 64 (8,12,16,20..) steps. The capacitive keys have a pressure output that produce a voltage proportional to the key area your finger covers. A separate KV output provides an equal-tempered voltage (16 equal steps) which is independent of the stage setting pots. A KEYBOARD switch lets you select each 4-layer stage with the keys or disconnect the key selection of the stages.

Pro: Extremely versatile. You can explore this sequencer for years and not exhaust what it's got. Can be clocked at audio rates. Easily chained to other (Serge) sequencers. The Pressure output is very nice, especially in conjunction with attenuators to make the pressure touch effects more subtle.

Con: The vertical clock doesn't reset when the Reset input goes high. If it did, it would allow more sequencing patterns. Also when 'KEYBOARD' switch is turned off, touching keys will still affect the starting stage in a running sequence, but only when you've patched one of the stage trigger outputs to the reset jack(!). Also, it needs to be externally clocked (like all the Serge sequencers I know of) so you need to use another module or external source to do this.

Wizardry: An advantage to external clocking is, you can experiment with clocking with waveforms that are not perfect pulses. The voltage range of each stage is around zero to 3.5v. When the pots are set to zero, they truly are at zero. The maxima are all different, however. Unlike some sequencers I've played with, there is no interstage interaction - turning a pot on one stage does not affect another stage.
Tweaks: The TKB design now uses bright amber LED's, which apparently are better than red ones in low-light applications. One of the Reset jacks was replaced with a toggle switch that sets forward/reverse sequencing in addition to the forward/reverse jack. The keypad material was also updated so it's more durable.

The TKB will work with Euro stuff. Banana jacks can be changed to 3,5mm jacks.

I've seen versions of the STS TKB on Flickr where the connectors are mounted topside. So it should exist. But I just can't find the correct parts... (And I have been looking...)
Last edited by zthee on Wed Feb 12, 2014 2:34 am, edited 3 times in total.
No PM's please! Send an e-mail - ttsh(a)thehumancomparator.net

Wow! Awesome! Now I know what my sixth panel will be.
Top

I can't see any mention of a panel.
Does the kit include one or will there be the option to buy one?
Top

Its a yes from me!
Listen
Top

"We all dance by ourselves, that's why we only play electronic music"

Isaiah wrote:I can't see any mention of a panel.
Does the kit include one or will there be the option to buy one?

Sorry sorry, of course there'll be a panel! I'll add it to the first post.
No PM's please! Send an e-mail - ttsh(a)thehumancomparator.net

Definitely in for one!
Top

Would be rude not to surely!
Listen
Top

im in.. assuming i have the funds available when its ready.

Very excited to see how people hotrod this now that it's a kit!
pyramid power is real.
Top

Finally
InKrellDible
yes for me
Top

what value are the pots?

All pots are 50k lin. If you don't want to wire them by hand you'll have to use 9mm pots (Like these - http://www.smallbearelec.com/servlet/Detail?no=693). 16mm pots are too big to fit unfortunately.
No PM's please! Send an e-mail - ttsh(a)thehumancomparator.net