Securing a PCB to a faceplate.

zthee wrote:This is the way I like to do it.

Not mine on the picture though - http://icb.se/araya/pics/sergepics/serge_open_big.jpg

Out of curiosity, what do you make the PCB frame out of?
Top

bf, I'll take some pictures tomorrow and show you!
No PM's please! Send an e-mail - ttsh(a)thehumancomparator.net FS: US only - Mutable Instruments Streams But, given a choice, I much to prefer to line 'em up! 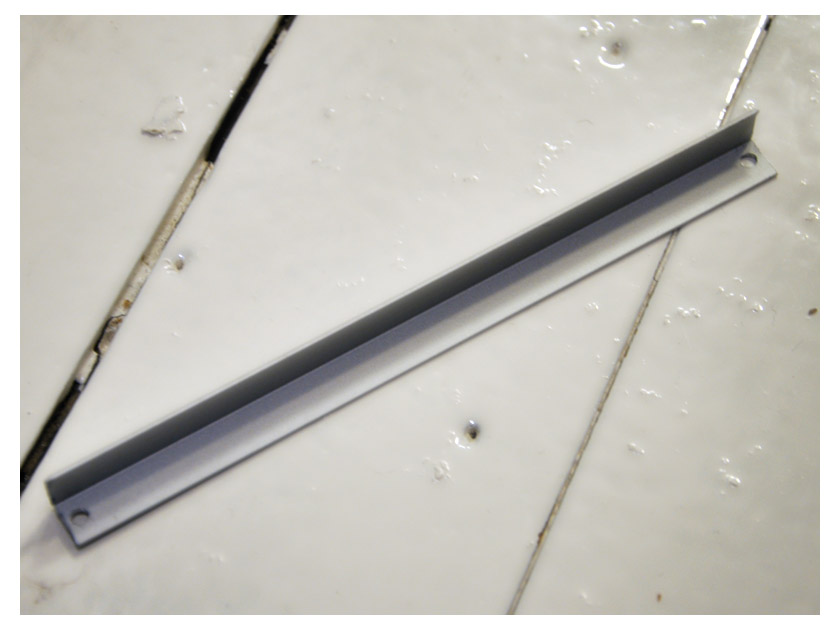 This is how the L-bracket I use to mount my boards with looks like (this is a short piece, that's supposed to sit on the ends. But I ended up not using it). I get them from my local hardware store. They're like $7 for a meter or so. 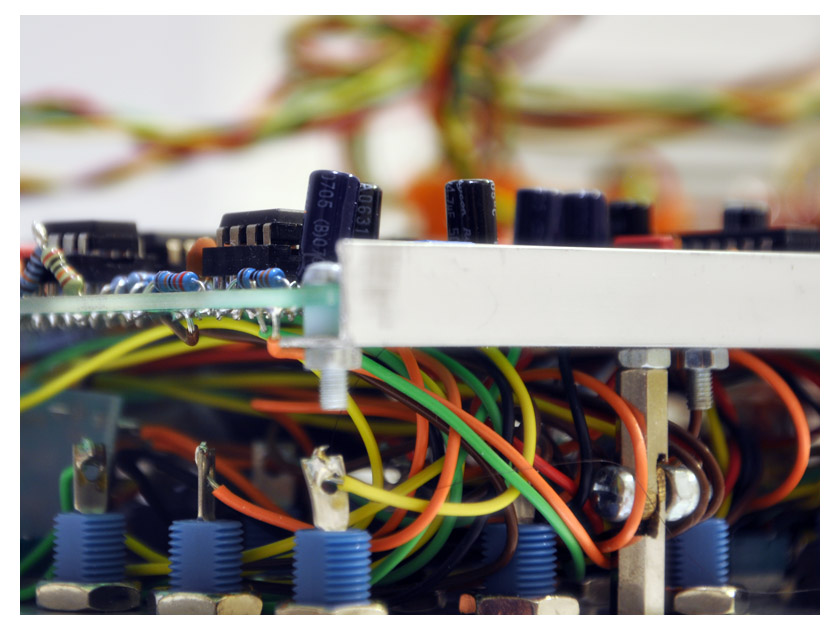 And this is what it looks like when it's put together. You'll see the hinges I built to be able to open the panel like a book. It's great when you're going to service the unit. You'll also see the nylon spacings I use to lift the board from the aluminum bracket. The distance between the PCB and front panel is about an inch.

Next time I'll go for the original Serge style though - using cable ties to mount the PCBs. It's utter crap, but I want to do it the "real" way

Zthee - so when you tighten those screws I assume they're threaded into nuts and the keeps the hinge from flapping about when you're not servicing it?

The panel itself is screwed into your boats right? So one side of each pcbs is secured as shown and no other support is needed?

What is making my hair fall out (what little hasn't already) is looking at these pictures of massively complicated wiring jobs done without connectors.

Connectors make wiring so much easier because you can do it with the PCB already mounted (you don't require access to the back). I tend to wire up each multipin connector one at a time. I have spools of wire hanging on the wall, and I grab several strands and solder them to the various destinations from a single connector. Then, I gather them all up and cut them all together to the proper lengths (much the way a barber gathers up hair between his fingers) with just the right amount of slack going into the connector. Then I strip, crimp, plug in, and finally throw a garden tie around the bundle somewhere to keep it tidy. I can completely wire up a panel of "normal" density (such as the "2164 Expo VCO" (

) shown in my previous post) this way in about half an hour. If I need to repair or mess with the board for any reason, I can have it unplugged, unscrewed and on the bench in one minute. Sometimes I come up with little design improvements in my boards, but use the same panel hardware. Then, I can just swap the boards.

Also, reflecting on zthee's picture of the hinged standoff, I would worry that the odd snipped solder joint on the back of the board might snag one of the wires (it probably wouldn't happen, but...). Also, with a tangle of wires, I might begin to worry about inductive noise.

That's a lesson I learned pretty early in my DIY career, when I built a couple modified MFOS Weird Sound Generators into plastic videocassette cases. One of the wires strung across the case was carrying an amplified signal from the VCF, and that signal was being broadcast into the rest of the circuit. I braided another length of wire around it and soldered one end to ground (leaving the other end free) and this eliminated the noise. Ever since then, I've been very circumspect about having wires go all over the place. I usually like to get them from point A to point B as directly as possible, preferably with several wires bundled together.
Top

I like the wire connectors idea as well...only I haven't really looked into which ones I need to order and for what project.

Unfortunately, the main project I'm working on now uses PCBs I got like 10 years ago and they've pulled all the I/O connections together on one edge of the PCB so that it can plug into a card edge connector. So I either run wires directly off of the PCB, or I rig something up using card edge connectors, which would be a hassle but might make some of what I'm doing a little more organized.
The Cut-Up Man: And other Posthuman Cycle stories
NightBird Calling, a Sci-Fi space adventure novella
PleshaCore, a Si Fi quest for identity novel in thriller/action trappings
Top

Hey emdot, if the edge connector pads are spaced 0.1" or 0.156" apart, then just drill a tiny hole in each one (carefully!) in a straight line and solder the appropriate MTA connector to it. For the 0.1" connectors, I use a #60 bit. For the 0.156" ones, I use a 1/16" bit. To line the holes up, lay a piece of perfboard over them and use a small awl or something else small and pointy to mark the copper. It's best if you C-clamp this down to the bench and actually whack the awl into each hole (gently!) with a small hammer. These pockmarks will guide the drill bit. (You'll probably want to use a drill press -- I have a cheapo Ryoki from Home Despot which I use for everything -- boards, panels, whatever -- $100 brand new).
Top

if you are good enough to finish large wiring jobs successfully without connectors all luck to you!!, i usually mess up a few things here and there so i use them. they make the build take a lot longer
Top

Klee and similar large stuff are exempt from any of the above glyphs.

With my stuff, all the wiring is planned out rigorously - all signal level stuff, or anything that be noise inductive is properly insulated and isolated from noise producing stuff. It also has to be laid out so that any and all troubleshooting can be done easily and without stress on the wiring. (note that that hasn't always been the case with my stuff - live and learn and all that - see my Doomsday machine for example)
flickr cloud of sound touyube NOT A MODERATOR ANYMORE
Top

Yes, I suppose if you're using your modular whilst riding a mechanical bull, then the connectors might come loose!

But seriously, I try to avoid using too many 2-pin connectors, because they can be a little bit loose. However, many-pin connectors are very tight, and honestly, unless one is shaking the ol' modular around, I don't see how they are going to come loose on their own. Especially considering that they lock in place (somewhat).
Top

I've been using a pair of metal shears, a drill, my door (to bend - worx great!!!), and some sheet metal from Home Depot. I really like the "door bending" idea. Very clever!
Top

Sorry for bumping this one, but its a goldmine for inspiration.


bf wrote:I prep spots a bit larger than the size of a standoff on the back of the panel and use a bit of JB weld. 1" standoffs give plenty of clearance for switches and pots.

Anyone else gluing/cold welding standoffs to the panel? How stable is it ? Seems like a quite easy worked solution, attach standoff to PCB, add glue, apply and wait?
Top

I was stuck on this dilemma for a while and only built modules where the pots were soldered to the PCB (not many of those in 5U land)... Anyway, I went on a mission to find something, I had a few standoffs in my component cabinets (either made of plastic or nylon, I don't know what material exactly, I just knew they were quite strong), they were great while they lasted, but once these were exhausted, I went on a mission to find something... My local model shop was the answer!...

They sell lengths of plastic/nylon tubes (or whatever they are made of), a square tube with a round bore, just the right size to drive a small self tapping screw into. They work great as standoffs, the beauty being that they can be cut to any length, so if the back of some components are bigger than average, you can make them longer for clearance...

There is also another added bonus; since they are square on the outside, you can drill into the side of them and have the PCB oriented whichever way you like. They seem pretty damned strong too, once your screw has cut a tap into the bore it is solid (even with really short screws).

Here's a linked pic of what they look like, but can't guarantee if these are the actual ones.. I'll ask next time I'm in the model shop and find out who makes them and what they are made of.

iopop wrote:Sorry for bumping this one, but its a goldmine for inspiration.


bf wrote:I prep spots a bit larger than the size of a standoff on the back of the panel and use a bit of JB weld. 1" standoffs give plenty of clearance for switches and pots.

Anyone else gluing/cold welding standoffs to the panel? How stable is it ? Seems like a quite easy worked solution, attach standoff to PCB, add glue, apply and wait?

Yes, I use this method. Works great.
https://www.instagram.com/uhf_owvl/
Top

Do you use JB Weld or any other adhesive? Getting hold of standoffs is pretty easy, the JB weld is more troublesome here.
Top

Nobody mentionned pot mounting bracket.
I don't find them on mouser.
Are they myths ?
"Unfortunately it took me forty years to conclude that nothing is possible outside DoReMi."
P. Schaeffer

i am doing the pot mounting brackets myself (DIY, hehe).
just bought some sheets of steel (0.5mm thick) at the local hardware store. i cut and drill them as i need them. for bending i use a vise, for cutting i use tin snips.
recently i used 0,8mm aluminium, which worked great, too.