Anyone received one of these yet or have any info on the release date? The sounds remind me a lot of the Vermona DRM but with a much crunchier snare. Not sure how I feel about the kick from this demo though.

nienhuis47 wrote:Anyone received one of these yet or have any info on the release date? The sounds remind me a lot of the Vermona DRM but with a much crunchier snare. Not sure how I feel about the kick from this demo though.

Hello, Im Julian AKA Inspektorgadjet, the guy who made that video.
Ill try to give you some usefull info regarding the ADX1.

Release date still unknown, Modemachines had them ready for production but something happened with manufacturing company that they lost the files and now ask for complete prototyping again, so they decided to choose another company.

They´ve built a new enclosure and small run of 25 units, that looks superb, but still no option to buy. Price is planned to be around 499€. http://www.modemachines.com/products/catalogue/adx-1/

Yes it does sound very similar to the Vermona DRM, because originally the ADX1 was designed by MAM and the same guy who made the Vermona.

Snare an hihat in this machine are great, versatile and credible. The metal channel is also very usefull and can make hihats close hats or snares easily.

The MIDI control also has some cool features, you can control quite a few parameters using MIDI CC, or use the internal random LFOs which add an unique "allways changing" character to the sound. I also love the possibility to control same channel as "open" or "closed" envelope release.

The weakest point for me, is the Kick drum too, since I make music with really punchy kicks, this part of the synth gets less attention, but still very usable in other styles with less deep kicks.

It has its own character and in general it really improves when using the individual outputs, for external processing or just mixing back in DAW or similar, cause the individual sounds are not "mixed" at the master section.

I would have loved to have the choice of substracting instruments, as you use their individual outputs, but they still present in the Master channel. That would allow some sort of Bus to merge certain instruments.

I still have a protoype with me, that I could use to record extended audio demos, let´s hope I can find some time soon to do so.

Hope it helps and it wasnt too long!
Cheers,
Julian
Top

I spoke with Michael, the CEO from Modemachines to get some info in the "past history" of the ADX1 and I got some really nice info, this is his answer so its in first person... here it goes:

The story behind ADX:

Originally I did the conceptional design for the DRM-1 with Thomas Haller from HDB - Audio , it marketed by Touched by Sound Syncussion DRM-1

Then we decided to sell it as MAM DRM-1 - then HDB Audio bought back the name Vermona and decided to build up their own brand making the MK2, MK3….

Stefan Schmidt, our MAM designer worked with me to make a slightly different version, smaller, easier to build and it was sold as the original ADX-1 by MAM.

Two years ago I asked Stefan to redesign it in SMT and improve some Noise issues e.g. and make it to fit into the pactec PT-10, as we had problems finding the right enclusre at a good price.. 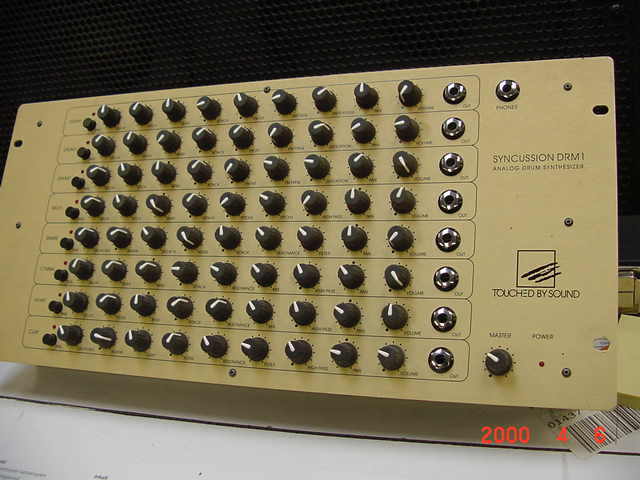 So I ended up ordering an ADX-1 - unfortunately my apartment was broken into and it came up missing BUT... it made such a good impression on me during what time I had with it that I ended up ordering a replacement. It takes a lot more tweaking to dial in useable sounds but it offers a much wider range of tones than most drum machines I've used. For instance, the spectrum of noise source on the snare channel is nicely paired with the filters, such that if you bring up the resonance of one of the bandpass filters on the snare channel (can't recall which BP but they are slightly different and one works better for this) and sweep it very slowly across the noise spectrum (which itself can be adjusted) it will ring nicely at certain points which works very well for the body of the snare. You can get a pretty wide variety of snares this way. The synth channel sounds fantastic with the 3 waveforms detuned a few cents and with FM you can get an almost infinite range of tones. Lots of room for exploration. And of course you can control its pitch with MIDI (though I'm not sure if it's possible to quantize this) It's trickier to find good sounds with the kickdrum but they are definitely there, especially with a little external processing. My only real complaint is the inability to soften the attack on the hi-hat and metal channels, they are quite clicky. But honestly, with all the parameters and FM options, plus MIDI integration, you could probably record a whole album with this box. Highly recommended!
Top

Hi Guys,
There is a new demo of the ADX1 where you can get a wider rango of sounds than the Demo above, links to uncompressed-youtube audio will be posted to Mode Machines Soundcloud soon.

Sounds a lot like the old, non mode machines ADX-1 to me

I made a freesound free sample pack many moons ago:
https://freesound.org/people/altemark/packs/2043/
Top

maltemark wrote:Sounds a lot like the old, non mode machines ADX-1 to me

I made a freesound free sample pack many moons ago:
https://freesound.org/people/altemark/packs/2043/

Hi, its suposed to sound the same than the old one.

For what I know all it has changed is size factor and certain parts like power supply, which help to reduce some internal noise.

Hi. Can anyone tell me more about the scope for midi control. Can the synth channel be pitched to play melodies using CC? I read it is quantised to 16 steps which suggests to me nearly an octave and half of chromatic notes, or something less useful. I appreciate it's designed for live tweaking, but sequencing would be cool too.
Top
Post Reply
9 posts • Page 1 of 1