Well, it was bound to happen sooner or later. Just got a mk1 BL in the mail, popped in the rack, powered up and poof, dat smoke man!

I had taken the power cable off the module to connect it to my busboard, and thought I put it back on the same way, but apparently not - serves me right for not making sure first before powering up. Sadly the rails aren't labeled on the PCB. It's weird, I had previously plugged in a Stillson Hammer mk1 backwards a couple years back (cable had the red line on wrong side) and it was fine, just wouldn't let the rig power up. Swapped the cable around and everything was fine. The BL, on the other hand, went poof as soon as I powered it on.

Powered down and unhooked it - upon inspection it appears only 1 part cooked, a little SMD dealie beside the square thing that comes perpendicular to the main PCB on the back, and possible scorched the base of the square thing a little bit, not sure if the square thing is actually damaged, but the SMD part is obviously cooked with scorching around it. I haven't powered it up since obviously

Anybody else done this? Fixable? I've emailed both addresses from the Harvestman site but havent heard back yet

Really hoping I can fix this, feel like such an idiot. Just to rub salt in the wound, my studio now smells like firey module death as a reminder of my misfortune

Thanks mang! Appreciate it. Figured he was getting ready for NAMM so didn't expect an immediate reply from the Guv
Top

I know you're rolling with the mk 1s, but maybe the IME will swap your mk1 Lester with a mk2 Lester.

I though of that also

We shall see. New one better be 13hp or less though, as that is exactly what I have to spare

Still prefer to get the MK1 to be honest, I like the way they work better with the offset and attenuation built in, not a huge fan of the atttenuverters on the mk2's, need to use external offsets to really dial things in the way I do on the MK1's

Plus the mk1's have such a great dirty sound to them, the mk2's are quite a bit cleaner in comparison
Top

I could maybe shuffle and squeeze 14, but 16 won't fly right now. The pics I recall seeing of the mk2, it looks around 14 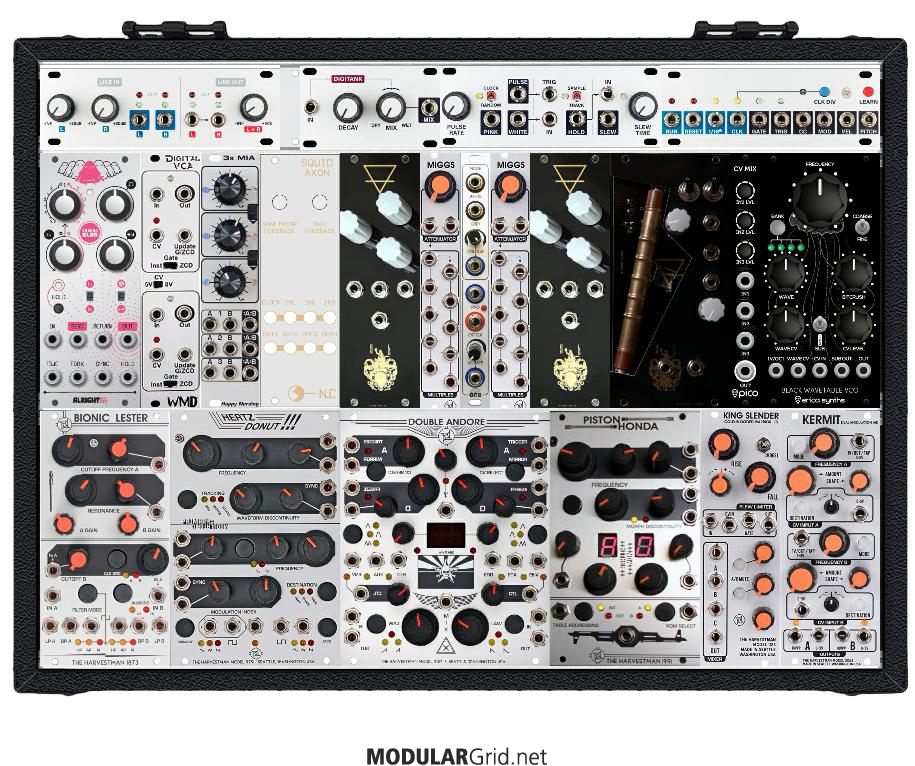 Dont think the MKII will
but I definetly need both

Dont think the MKII will
but I definetly need both

Thanks. And ya, I feel pretty bad about the whole situation. As for negative cv, I believe it is just like the other mk1's. They want 0-5v, but because the main knobs act as offsets and the smaller as attenuators, you can send it whatever range you want, bi-polar or otherwise and then you just dial things into a useable range. I much prefer this to the mk2s, as you need an external offset to achieve the same thing. Much easier to dial in sweet spots and little modulation zones on the mk1s.
Top

Well, second times a charm. Got a replacement today, managed to plug it in without burning my house down.

Still waiting to hear if I can fix the other one. Probably follow up in a week or so, sure they're still playing catch up after namm
Top

So I finally got word back from the guv and it can be fixed!! Huzzah

In other news, my knob order arrived, et voila

Where did you get the orange knobs please?
Top

From the Harvestman - they recently added them to the shop

I originally just ordered a few for my Tyme Sefari, as it came with black rogan knobs from the previous owner, but once I did that one, I had to do the rest

Relatively cheap, and pretty fast turnaround - I think I ordered the last batch of knobs just before NAMM and received them yesterday
Top

Oh nice - cheers - I was wondering when the website was going to come alive, although I notice it's not actually linked to from the home page yet hehe

There was a thread here when it first launched a month or so back, that's how I found out

I totally missed it

Damn. Didn't think the mk 1s would look so nice with the new knobs.

Ya, they suit quite nicely. Double Andore is a bit crowded, but then it always was, and the way I have knob sizes mixed, it's not that bad to get at everything. I have the tall ones on the wave select and envelope ctrl

I had planned to put knobs on the little black ones on Kermit and the black locust, but they are REALLY tight fit, so I thought better of it, was having to put too much force and was likely going to break things if I kept trying. Just need to add the white lines to them, so I can see the notch better. I tend to work in fairly low light, and I often find I either need to touch them to feel where the notch is, or lean in and look, which is a bit annoying. It's funny, on modular grid, Kermit has a white line on the black knobs, not sure if this was a later revision, but mine doesn't have this.

Leaving the ERD's alone. The orange knobs would look silly on them, plus they use d shafts, so wouldn't fit without modifications anyway
Top

Nope, they are the same as what come on mk harvestman modules, round ridged shaft
Top

So... which way should the red stripe face when looking at the back? I just received one and it came with the ribbon loose in the box...

I can totally see how you got it backwards - there's absolutely no indicator!!

sackley wrote:So... which way should the red stripe face when looking at the back? I just received one and it came with the ribbon loose in the box...

I can totally see how you got it backwards - there's absolutely no indicator!!

I'll get back to you when I get home later tonight if no one else replies.

Return to “The Harvestman”