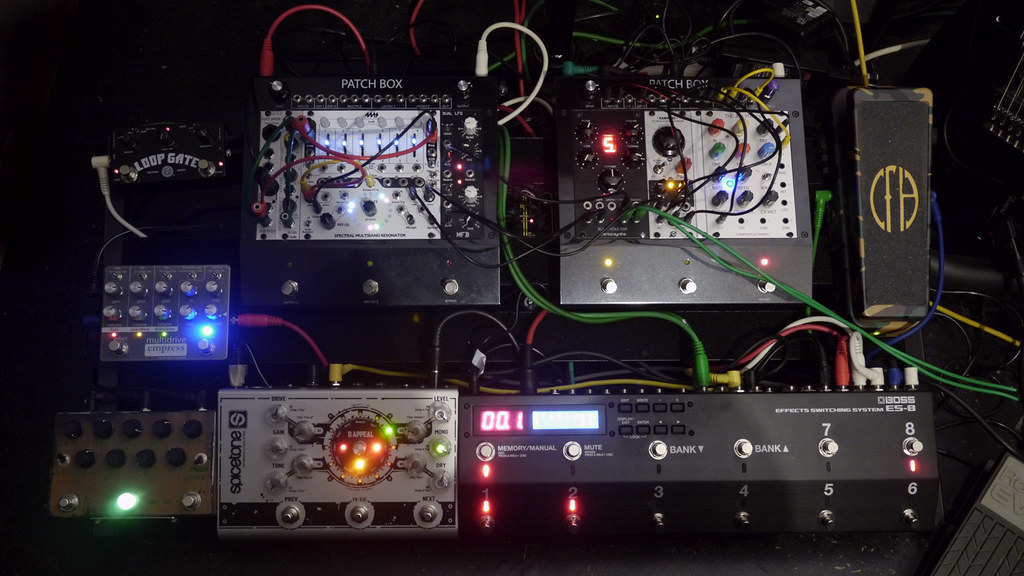 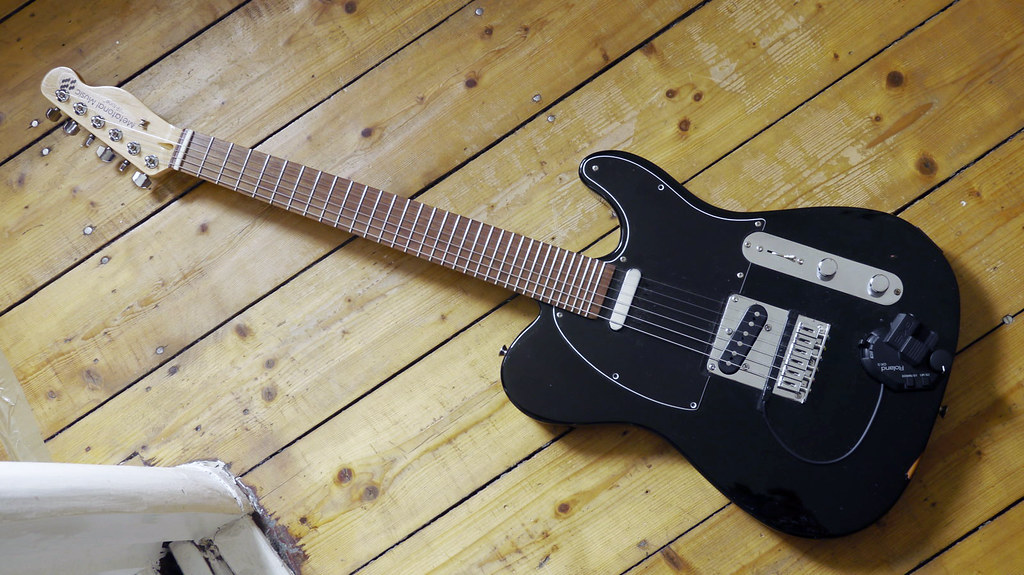 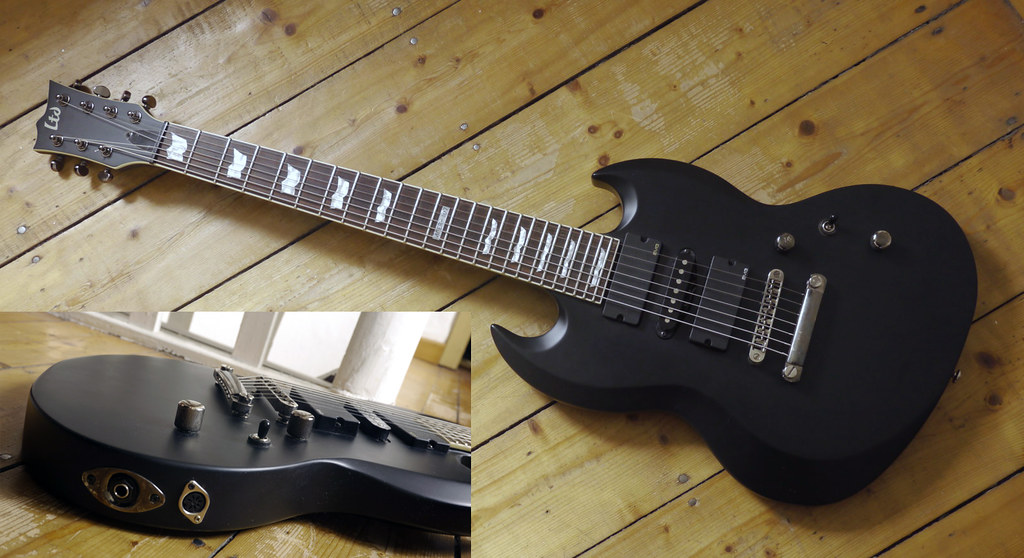 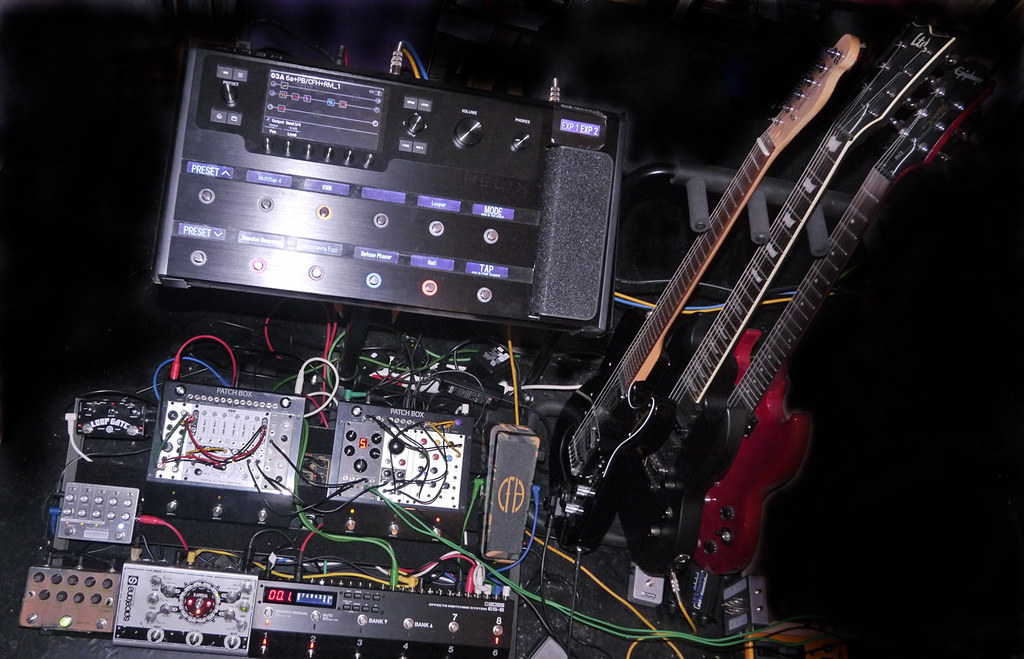 The red one is also hexaphonic (ubertar divided pickup, guitar bought from Pauls website), but I’m not playing it at the moment as I’m planning to have it unfretted.

I play the microtonal guitar mainly through the pedalboard, and the Viper usually into three seperate audio paths of the Line 6 Helix (I have it on a stand for easy access) using the Boss ES-8 as MIDI foot controller.

I don't play the guitar through the SMR, I play the SMR via foot pedal. Makes for a great sound addition!

Let me know if you’re interested in sound samples.

I have a 24 fret/octave guitar from Ron Sword Here's a set of 12 snippets from recent sessions. Be warned though, there are some harsh noisy passages, but also much quieter atmospheric stuff. As I panned the individual strings in the 6Appeal, stereo listening via headphones is recommended.

Metatonal 19-EDO guitar with GK3 hexaphonic pickup into Spicetone 6Appeal for analogue distortion and panning of each individual string, mono output into several other pedals, 4MS SMR in Bohlen Pierce scale played via foot switch. (edit: uploaded much shorter excerpts, all in one track instead of the older playlist)

And an earlier one with a slightly different setup…

I have a cheap beater I pulled the frets on for microtonal, but nothing like what you've got going!

I've been jamming on this dude for a while now for microtonal and compositional madness:
Top

Nice thread. I have an ubertar made moveable fret microtonal guitar and i am putting together a small eurorack system purely for processing the guitar.

I am looking forward to the new tubbutec microtonal quantizer which i will use with an echophon to get xen tuned delays.

That spicetone effect looks awesome thanks for sharing that!

I am also looking to get the patch chord module and the doepfer a-113 which will give me harmonic and subharmonic chords.

Using an entry point, harvestman black locust and an alm sbg or malekko or doepfer send return will allow me to process each string separately and a matrix mixer with the black locust will create interesting feedback networks.

It seems like you are doing similar things here. Could you explain the signal path in a bit more detail. I find this stuff fascinating!
Top

King Gizzard and the Lizard Wizard just put out an album called Flying Microtonal Banana. They all used guitars/bass modded to something similar to an Anatolian scale. Sounds pretty rad.
Top

Didn’t know you’re on Muff’s… Long term fan here, I have purchased several of your CDs from bandcamp over the years and also your new vinyl. Your music is awesome, keep it up!

@ mmelnick: Quartertone is very cool! Check out Jute Gyte, he’s a hero of mine

@ justintonation: Interesting patching ideas! Also, would you mind posting a pic of your ubertar?

The Spicetone is awesome, I can highly recommend it. I’m using it rather conservatively though at the moment, not making too much use of its very sophisticated internal LFOs, Sequencers etc. I love its basic sound and the panning. For a while I also used it as a breakout box routing separate strings to different effects.

But for string separation I tend to use the 7string viper now. For that one I have a breakout box with internal mixing. What I usually do is send the lower three strings to some kind of distortion, fuzz or overdrive, detune the middle string down one octave for „bass“ duties, and send the upper three strings to reverb, delay and/or modulation effects. This way you can sound like two guitars and a bass simultaneously. Takes some practice though

As for the signal flow in the pictured setup: Standard mono output goes into the normal guitar input of the Boss ES-8, the stereo out from the 6Appeal goes into one of the two stereo returns. Two good things about the ES-8 are that it allows for using returns as inputs and also for reprogramming the loop order. So you can save different loop orders (and loop on/off states, of course) as presets and change the sound drastically with one foot switch. But I’m still using the Boss mainly in Manual Mode.

Signal path of mono-output at the moment:

Btw. I changed the soundcloud playlist to a single, much shorter track which is hopefully a bit nicer to listen to.

Something I did using a quarter tone midi guitar and Roland VG-99 as the only sound source. Didn’t know you’re on Muff’s… Long term fan here, I have purchased several of your CDs from bandcamp over the years and also your new vinyl. Your music is awesome, keep it up!

Hah, just to clarify, I'm not affiliated with Jute Gyte. Im just a big fan of his work!
Top

Y'all need Horse Lords in your lives.

Listening now… I really like this! Thanks for posting! I admit I had underestimated just intonation until now… Or are there also other scales involved?

My understanding is that the guitarist uses several microtonal guitars... I think that write up referring to just intonation may have been done by someone else without a solid understanding of the different types of intonation... Or maybe now I'm making shit up.

My sweetheart met the guitarist while she was touring the east coast, said he was cool before she ever heard their music. She saw them live at big ears and said the show was RAD.

I still haven't seen them but dig their records!

11ish wrote:Listening now… I really like this! Thanks for posting! I admit I had underestimated just intonation until now… Or are there also other scales involved?

Horse Lords put on a great show. DC-area fans are lucky to have them based in nearby Baltimore.

I asked them a bit about the guitars and bass after noticing the frets were unusually spaced. They said they work with just intonation (JI).

JI is any scale in which the pitches are ratios of a fundamental pitch.
http://www.kylegann.com/tuning.html

A lot of JI music thus tends to stay in one key, but there are some JI composers who exploit the dissonances that are possible when venturing "out of key".
Top

11ish wrote:
@ justintonation: Interesting patching ideas! Also, would you mind posting a pic of your ubertar?


Sorry I only just saw this.

Here are some photos of my ubertar guitar: I am thinking of putting a trilogy hip shot bridge on it to allow changing the open strings more easily : https://store.hipshotproducts.com/cart. ... etail&p=31

Thanks for the details regarding your signal chain. Lot's of options in such a set up.
Top

Does anyone know or have a second hand micro-tonal neck for sale, I'm UK based.
Top

Awesome! Glad to see other people into microtonality! The cheapest and easiest way to get a microtonal ax is to get a saz, which has tied-on nylon frets (basically, fishing line wound around the neck) you can move to wherever you'd like. I picked up a cura saz in Istanbul when I was doing a show there a few years ago and have been using it ever since- the other day I ordered a custom neck from Ron Sword (MetatonalMusic.com) in the same intonation system i settled on (a Just system with 17 tones to the octave) so I'll be putting together an electric ax in a couple of weeks, whoo-hoo!
Top

After reading this thread I picked up a Ron Sword 24 note microtonal guitar (damn you 11ish! :-))) )

It's great, it takes a while to get your head around, but once I forgot about trying to play it like a normal guitar, and just got into it for what it is, all was cool. Ron Sword is a great guy to deal with.

Pretty cool thread. I've been out of the loop.

I just play a Vo-96 Acoustic Synthesizer with a normally fretted guitar neck, but the sustain magnetic array allows me to get all kinds of microtonal scales as I barely even have to depress the string to get the in-between notes and glissandi between tones. I'm exploring ragas right now, but intend on also exploring the anatolian scales and others soon.

I had thought about making or buying a hexaphonic pick up but never followed through.

Here is a source: http://www.ubertar.com/hexaphonic/

I find microtonal music takes time to get your ear adjusted. It just sounds wrong the first few listens. Then one day it's starts to sound normal.
Top