and here we have.. the First ANALOG boutique synth. 499dollars.


The SE-02 represents a collaborative effort by Roland and Studio Electronics, the company behind innovative synth modules such as the Omega 8, Boomstar, and Tonestar. The SE-02 is a 3-oscillator analog monosynth module with discrete analog circuitry that delivers massive vintage tone courtesy of three voltage-controlled oscillators, a voltage-controlled 24dB lowpass filter, and a dual-gainstage amplifier. The oscillators are temperature-stabilized with automatic tuning to keep them from drifting. To give you expressive hands-on control over this impressive firepower, the Roland SE-02 features a command center packed with high-grade knobs and switches, plus a fully featured 16-step sequencer.

It's a big F*** You at Behringer in my opinion...
It seems to me that you're the expert, Mark.
Top

It sounds great -although a bit too moogish at times in the demo for my taste, but i guess that comes with employing SE. great box nonetheless.

"writing about music is like dancing about architecture"
Top

I'm sure it sounds stellar, but more tiny controls. I'm sure it makes shipping cheap and helps cut down cost for the buyer, but if companies are going to this, I wish they would offer a deluxe full size version. This is where Korg really gets what's going on imho.

Anyway it's SE so you know it's going to sound good. Ironic that Roland can't produce something like this themselves, I guess they feel people will respect a product more in the current environment if it's from the smaller outfits.

Either way it is win win for us. Just take a leaf out of Korg book and make a pro version.
Top

Didn't see this one coming. Would've never thought there would be a partnership like this, let alone a Mini with the Roland name on it.
Top

Definitely seems slammed out the door to beat the Behringer Model D. Nice to see what a bit of competition can do!
Top

But yeah, those knobs must be teeny tiny..
Top

I wonder if it will have a poly chain mode
Top

Interesting move from Roland : not for me ( my 2 tier M-32 set-up isn't breaking a sweat here ) but I'm more interested to see what else they might
bring us down the line.

I do hope they break from the Boutique form factor at some point though : e.g. my MS-20M kit is just such a blast to use with that extra size, pot-throw, spacing etc. It's the difference between something that you can indeed make cool sounds with & create music & an instrument...IMHO. Not saying that makes a larger box superior but the option would be nice.
Top

So tiny and sweet. Could be lovely for travelling/live.
YOUTUBE
NEW ALBUM
Top

pulse_divider wrote:I wonder if it will have a poly chain mode

Yes, it does.
Top

A lot of synth in a small package, would be perfect for a beginner. Sounds good, easy to use, portable, all boxes checked.

For me though, it's too much of a minimoog wannabe. Coming from Roland I would have wanted their own take on the filter. The sounds I associate with Roland always comes down to the filters (303, SH-101, Juno, etc.).

Delay, I also find useless. In the studio I would record dry and choose to add the effects later on, and for live use it's better to have a dedicated unit with bigger knobs. Why not put in a chorus instead like on the Juno? That is such a classic Roland sound.

Somebody should just design a new synth with the best bits from the history of Roland, it doesn't look like they are going to do it.
Top

The delay is digital , right ? Assuming it will be the same mono delay.
Answered, missed it on the spec

Also with the Moog layout and sound, is this a reference to the sh-02 / se-02
Like an extension of, bc the sh-02 sounded very Moogy at times.
Top

can the sequencer be triggered by 808 trig out or audio?
http://soundcloud.com/umbromaniii
Top

CoreInside wrote:can the sequencer be triggered by 808 trig out or audio?

I know the Rim on the TR-09 also doubles as a trigger output so possibly a solid thwack could do the job.
Top

CoreInside wrote:can the sequencer be triggered by 808 trig out or audio?

It has a trigger input, like the TB-03, so yes I would think so? 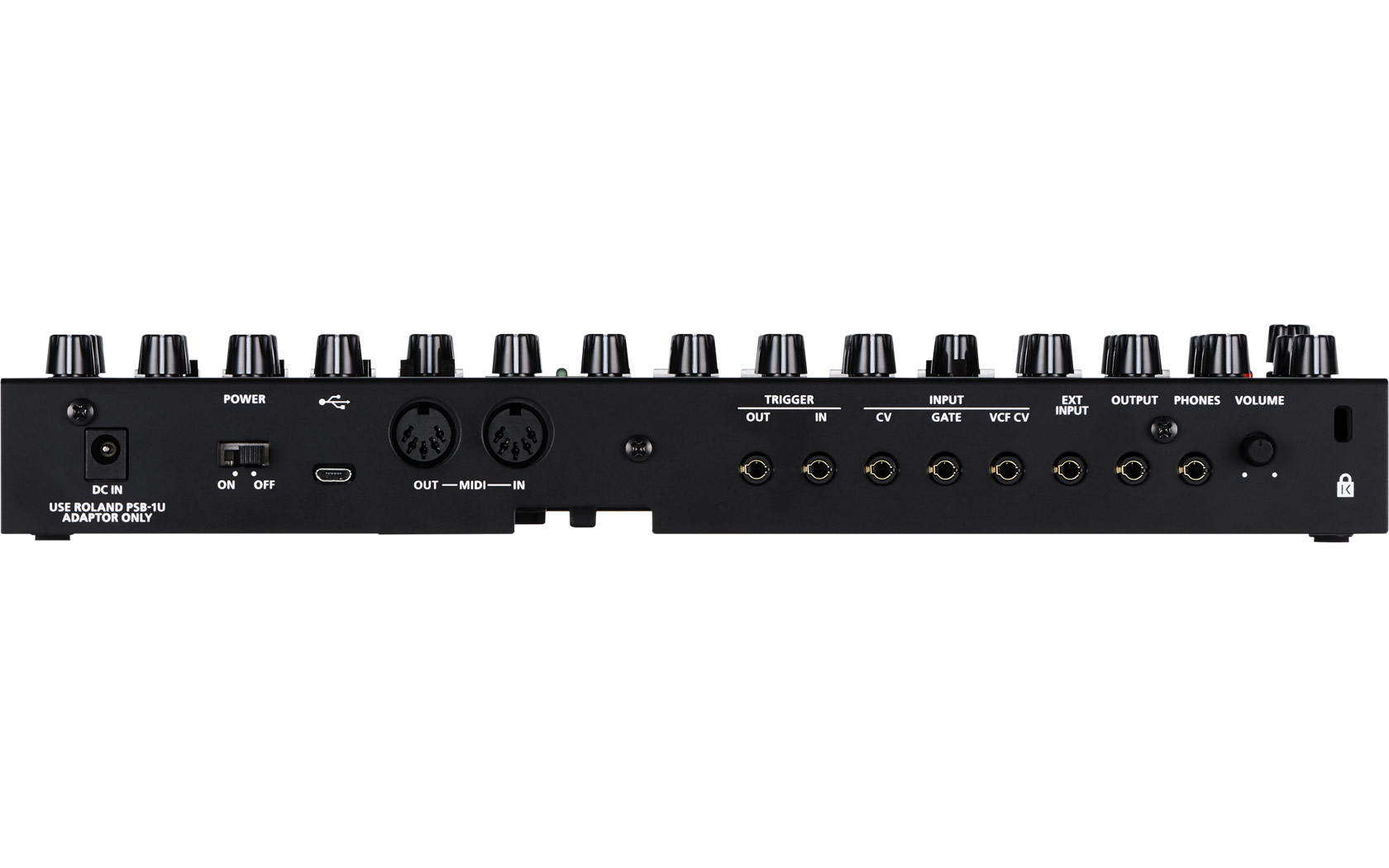 This looks great. I love the idea of a small analog monophonic synth with no keys. I built a PAIA Fatman for around $350 after all was said and done. For $150 more, I can have something so much beefier and more versatile. Might have to throw this on my "I finally have enough disposable income to occasionally buy stuff I don't need" list.
Radioactive Sandwich | Spotify | Bandcamp | Instagram

Things for sale on Reverb

While it appears to have added sync, crossmod, and an LFO, what about PWM???
Beyond the sandbox
Top

Roland just "have" to cover every niche of the market now, don't they?
Where does this leave people who bought a System-m1 more or less recently? Glad I didn't as I didn't like its sound and lack of external CV inputs.

Anyone know if this is a another Darkplace Manufacturing collaboration, like the Euro modules? SE designing, DM, well, manufacturing, and Roland distributing?
Top

There is a PWM option in the XMOD section. Would still want a dedicated pwm control though

The waveform select does give you 3 flavors or square/pulse so I assume they just give the means for some PWM via Osc3
tetno: https://soundcloud.com/richard-holhburn
Goiks: A eurorack setup is a contemporary folk instrument. Relatively accessible and portable. Largely by, of and for the people.
Top

Looks like a little beast, hope it sells loads to send a message to Roland that this is the sort of thing we want.

Apparently you can do parameter locking with the sequencer which is a really nice detail. I've been looking for a mono with patch memory so maybe I'll wait and see how this pans out.
Top

Wow, this thing looks really nice. I wasn't happy with the other boutique stuff but this looks like some love went into it. Might be owning this one day.
Top

For my taste, the Minimoog is a synth for performing and the parameter locking doesn't add a LOT to that design (still very cool, don't get me wrong) and missing a keyboard and dealing with small knobs would probably be restrictive.

It's a cool idea, but a little disappointing that they're entering what is, it must be said, a pretty saturated market for Minimoogs: the Moog Music reissue, AJH's awesome modules, the Behringer thing, a decade or so of suitable soft synths...

Would be cool to see Roland churn out some of its classics instead or at least do something inspired by the ARP 2600 or VCS3.

Really interested in direct A/B comparisons to a Model D. I know this is a totally different item (and microscopic in size comparison). The seven minutes video seems a little thinner and too bright by comparison to the D, but also 3,000 dollars less, which isn't a bad problem. I regret the seven minute video is mostly keys bopping and not much knob turning with a sustained note, which can usually reveal more of the dynamics and animation.

SPOKEN WORD WITH ELECTRONICS #20: A Tribute to Anne Sexton