As these sections get completed, I'm putting them up on Bandcamp as micro-albums. Here's sides one and two:

Hey there! I've been loving the Disquiet Junto challenges on the Lines forum (e.g. https://llllllll.co/c/disquiet-junto)

I've been participating for the last few weeks and am making an album out of the weekly challenges, with an idea to have about sixty or so tracks when done, each under a minute apiece.

I'm compiling each track as a "Short Stories" playlist.
https://soundcloud.com/eptc/sets/short-stories

Here's the first three. The idea is you'll get to know a neighborhood through each track highlighting different characters and events.

Thanks to Marc at Disquiet for this awesome offering of challenges, too. If you haven't tried the Junto thing, I really recommend it.

"The Birds & The Escaped Convict"

"The Breathing Man in Accounting Secretly Looks at the Lingerie Ads"

(more information on this week's track at this link)

The Wobbling Lock Pick, or WLP, as it is commonly indicated on most synthesizers, is one of the oldest known vibrating instruments. Wonderfully primitive in nature, its sound is actually dependent upon its interaction with another rigid piece of metal. This conduit is often referred to as a ‘Lock’ or ‘Key Hole’. Sound is made when the WLP is vibrated within the aperture of a small hole, or slot, found near the handle of a door. The wobble itself is the basis for LFOs and much other synthesized noise.

The WLP itself was first introduced at the World’s Fair in 1893, Chicago. But you likely don’t know this because back then it was foolishly called THE PAPER CLIP. What a silly name. Yes, Samuel B. Fay could have gone down in electronic music history as the creator of the Wobbling Lock Pick! Instead, he misunderstood the nature of his discovery of a bent brass or steel clip, and thought it would be most useful in the world of tidying up officework as a clasp.

The Wobbling Lock Pick was resurrected in 1928 by a young musician and inventor. Raymond Scott was looking for new and interesting noises. One day, looking for these noises, he got locked inside of an office. As desperation began to devour him, he found only two things on the desk: A quarter bag of fresh psychedelic mushrooms, and yes, you guessed it, a single steel wire paperclip!

Addressing his immediate hunger, Scott consumed the mushrooms. “Gad they taste horrible!” and then in forty minutes to around an hour, he exclamed, “I need to get out of here, the room is becoming smaller and full of moths!”

Thus, Scott shoved the paperclip into the key hole. But as he went to escape, his wiggling got more entrancing. “What is that I hear!,” Scott exclaimed. What he heard in the paperclip was something very strange. He heard the future.

Escaping from the room and still hallucinating, Raymond Scott wrote down the schematics for the WLP. He turned a simple paperclip into the basis of electronic music as we now know it!

A patent was quickly issued: 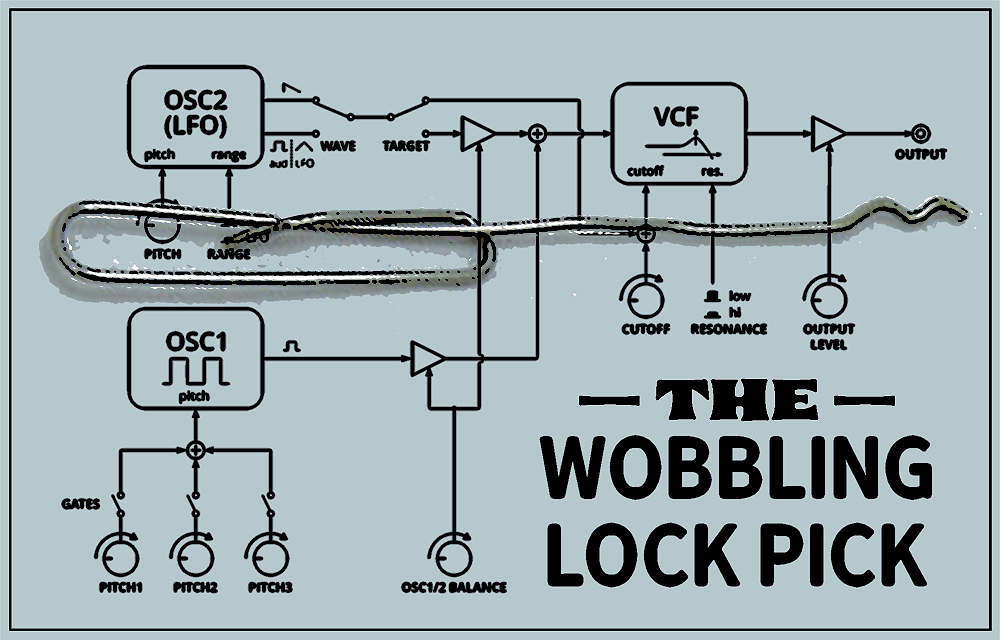 This first recording, posted below, was issued on 78rpm platter in 1930. Though an extensive restoration process has restored it to such fidelity, it sounds like it may have even been recorded tonight! It shows Raymond Scott’s amazing progress with wobbling on metal to break into a home, and continues the story of The Convict from Short Stories, who was initially introduced in Disquiet 0380.

Listen now, to the sound of Raymond Scott and his amazing Wobbling Lock Pick:

"Voices in His Head as He Looks Through the Living Room"

Cant wait to listen properly at work, love your stuff so much!

The Bureau is just amazing, it actually changed the IT department at my company. I sent out a (rather drunken) slack message to the whole studio of 600 people and the soundcloud plugin worked perfectly....with no volume control

paperCUT wrote:Cant wait to listen properly at work, love your stuff so much!

The Bureau is just amazing, it actually changed the IT department at my company. I sent out a (rather drunken) slack message to the whole studio of 600 people and the soundcloud plugin worked perfectly....with no volume control

I'm totally interested and delighted in the Slack story! Man, if you sent track five or fourteen (aka the most aggressive sounding tracks of the album) into the channel that would have been hilarious.

"Desperate, He Searches Through Every Drawer, Dresser, and Cabinet"

"The Venetian Blinds Have a New Message"

"Unexpectedly, She Comes Home to Get a Book. He's There in the Hallway."

I wish my blinds were that friendly

Love this: Thank you!

We turn now to local TV:

well she splurged and a TR-8s hats off to Roland though. The whole thing is much more like an instrument than a groove box. Sample handling is basic but the fx can go bananas. 30 days