Hey, I'm doing a Kickstarter for the 1U Tile skiff case I've been schlepping around at Knobcon, TSF and elsewhere. 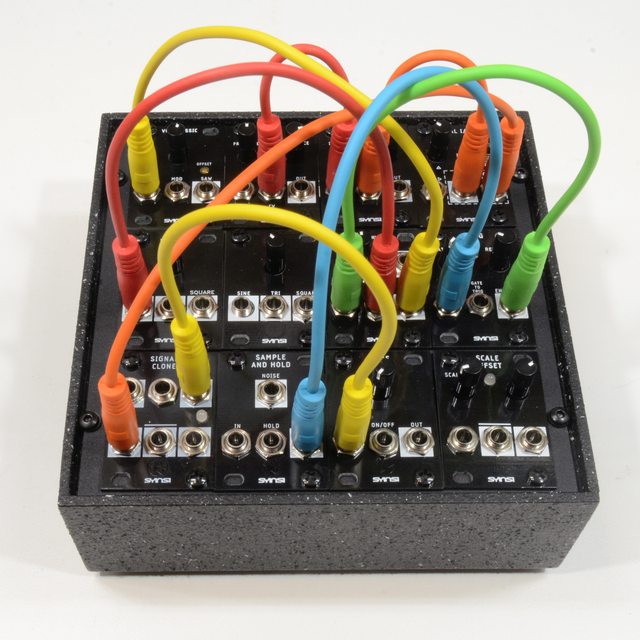 For the Kickstarter there will also be a couple turn-key configurations complete with patch cables. 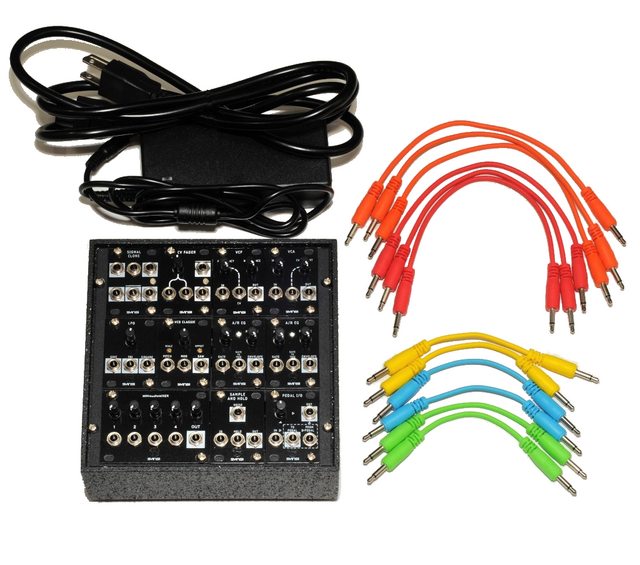 The "Monosynth" configuration includes everything needed for a basic analog synth voice. 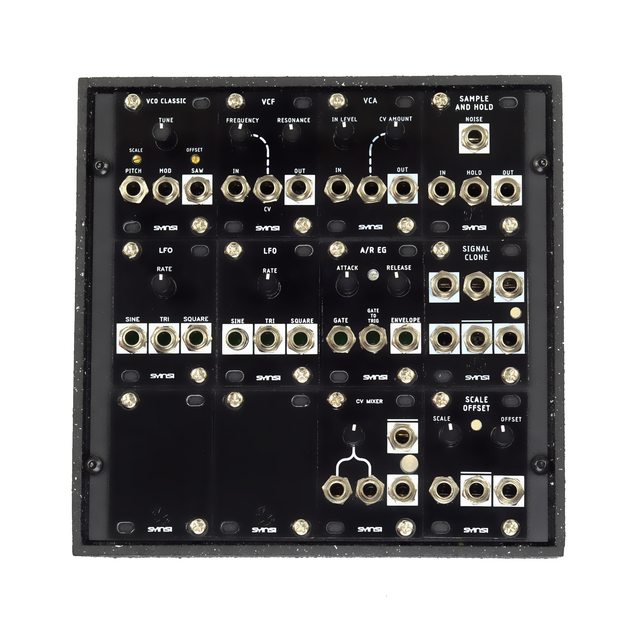 And the "Utilities" configuration has a lot of utility modules to go along with an existing modular or tabletop system. 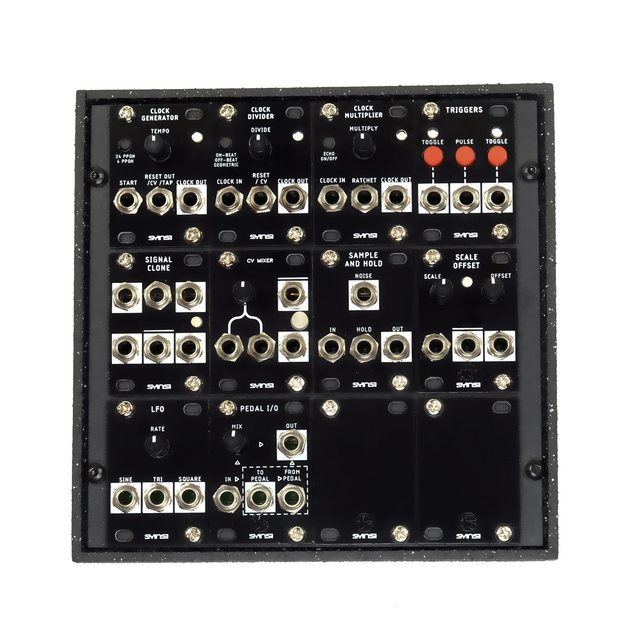 Nothing is written in stone and I'm open to suggestions.

For pricing I'm thinking about:

Because of the way Kickstarter works the actual prices will be in Canadian dollars so the USD equivalent may be off by a few dollars depending on the exchange rate.

This is really interesting and cool.

I don't think it would work (as I think I understand the question) because the horizontal rails would get in the way. 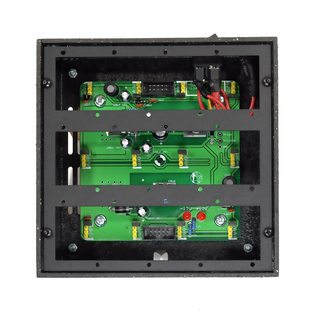 I don't think it would work (as I think I understand the question) because the horizontal rails would get in the way.

Ha, yes, for sure. I meant would the vertical spacing work out, but was mostly thinking about alternative configurations. Sorry for the confusion!
WTB: Your 54HP lunchbox!
Top

looks interesting! I still think 1u tiles are best as a middle row in a conventional case, but why not also in this form?

Some suggestions: The mounting bracket can be replaced, or? So in principle it could also serve as a mini case 6u modules (like the 4ms pods) with a different mounting bracket?

It might be of interest to some to be more flexible.

My own tiles also do not follow the strict 6hp or 12hp convention. So I wonder whether it is possible to have more mounting holes so that also other tiles fit?

A bit more far fetched: A lot of folks want Intellijel 1u but they do not work without their own cases. So there could also be a suitable mounting bracket for Intellijel 1u ... maybe then even DSC starts to enjoy them (problem here is that they use conventional power headers and are quite wide, so it will be difficult to fill the 24hp without gaps. Also: added confusion).
Top

Yes the top is laser-cut aluminum and is held in place by the four (black) bolts on the left and right sides.

In theory Intellijel modules should fit, but it may throw the spacing off for that row. I don't have any so can't say for sure. There are already a couple 10-pin Eurorack power headers for the few 1U Tiles that use that instead of tails.

I made some 3/4-sized 1U-Tile blanks for someone that wanted to fill-in the sides of their Tile row. They could be used in cases where a large irregular gap needs to be filled.

I had thought of adding extra screw holes, but tapping holes is a manual process and is the largest cost for the rails. That's why only alternating holes are used. But who knows? Maybe there will be enough money to buy equipment to fully automate.

All the music in the above video is made with 1U Tiles, and it was composed in a video editor rather than a DAW. 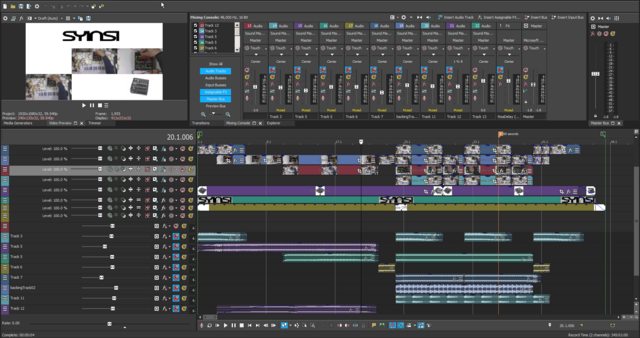 Audio was recorded directly to the video camera above the table.

The keyboard (Arturia KeyStep) was sending a 140bpm clock as well as CV to the EuroTile modulars. I jammed around and recorded the bits (to video) that sounded okay.

The tracks were brought in to the DAW --er-- editor and the video was muted while the audio were cut down into segments and loops (automatically cutting the video). The timeline in the editor was locked to 140 bpm and snapping set to 4/4 bars so it would be easier to line everything up and keep it all in sync while figuring out the arrangement.

Incidentally, the filter sweep sound at the beginning (track 3 in image above) was discovered while trying to do the synth sound in "Tom Sawyer" (as one does

). It's just a filter sweep of the same note at several octaves. The AR EG was controlling the VCF so all sweeps would be at the identical rate. The four separate tracks were panned hard to either side then mixed down to a stereo track.

After the music was arranged and mixed, the video was un-muted then moved into the grid so the appropriate clip would jump into existence whenever their audio was playing.

When you start the kickstarter (which I'm really excited for by the way), I think it's worth specifying that you only intend this for Pulp Logic 1U modules. I know there are a couple other companies that make 1U modules that wouldn't work out on this case.

Had you thought about going wider and only 1 or 2 rows?
Top

Yeah, it's a pain. I make it a point to always say "1U Tile", which is what Pulp Logic calls them.

One of the first versions of the case was 4x4 (16 modules) instead of the current 3x4 (12 modules), but it felt too big and looked funny. I also did 4x2 (8 modules) but it was too small -- I use it now on my test-bench to hold some modules I use for testing other modules with.

10 basic modules seem to be the minimum one needs to do all the typical things a modular synth does, so 12 modules is a good fit. It's also a good size that isn't too small but also doesn't get in the way.

Just set the date for the Kickstarter:

It's now live! [Check it out here]

Good luck with this!

I came very close to deciding I wanted a bunch of tiles when planning my new setup. At this price I still might jump on it in case of future desires

brilliant! liking the utility setup. would be neat to get some of the basics out of the main case which would free up more room for other needs. i like this. a lot. 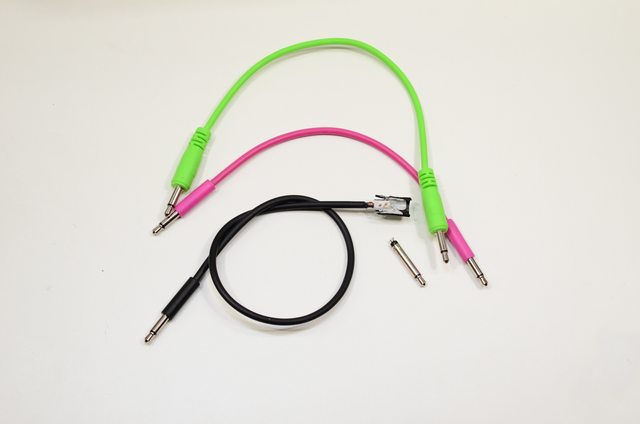 What are your thoughts on these patch cables?

The green ones are Erthenvar (RIP) which I really like because they have a nice rubbery feel, but can't find them anywhere.

The pinkish purple one is a "skinny" patch cables from Modular Addict. It has the same rubbery feel, and is nice and thin yet somewhat tall so are easy to get in and out of cramped spaces. I've been using these cables for a few months and like them. I've asked around and haven't heard anything bad about them.

The black one is from a factory (the source?) that was tested TO DEATH

. It took a lot of damage before failing, and after taking it apart it's easy to see why: the jack part and the cable part are moulded together with a hard plastic (the white stuff), and then material similar to the cable is moulded over top.

These "skinny" patch cables are what I'm leaning towards now. There's still one batch of cables from another supplier that hasn't arrived yet.

These 90-degree cables were also considered, but in a crowded patch they quickly get in the way. 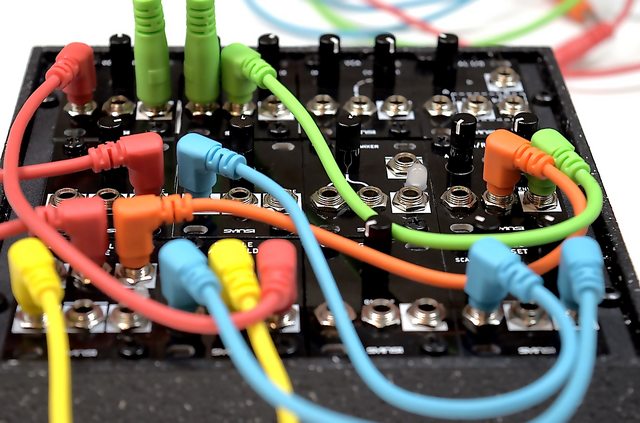 (They're great for overhead filming though. These are Erthenvar again -- anyone else selling them or similar? I wouldn't mind getting more for videos.)

About 3/4s there at the halfway mark.

Thanks to everyone who pledged so far. 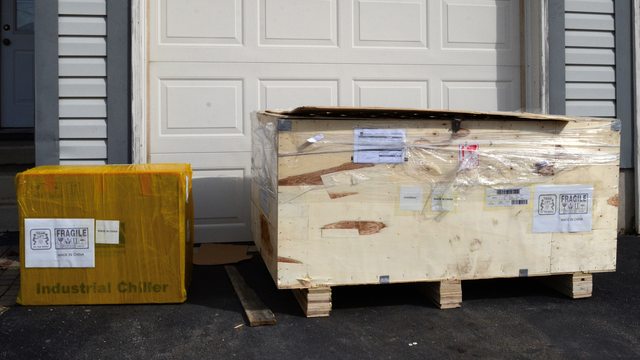 Congrats on a successful Kickstarter!
Abandon all hope, ye who wiggle.
Top