Following up on some posts from the Eurorack Pictures thread, this is a topic for sharing examples of, and ideas for, small modular systems, the goals and concepts behind them, and the sounds you've made with them.

This is what I've got racked up in my 7u 42hp case at the moment. A tape delay/looper emulation. The concept behind the system and the patch here is a 3 head tape delay. That's not entirely accurate to how it functions obviously, but it was the inspiration behind the setup. It's a hands-on performance rack that I'm mainly using to create sample-fodder for other songs, rather than produce standalone tracks with.

The Reflex Liveloop acts as the tape. Since it resamples when you change the delay or loop time, it reproduces the pitch shifting effects of tape quite nicely. So I can use it to set a loop length and speed. I'm using LFOs from Batumi to simulate tape warble and Disting's triangle-to-sine-shaper to simulate that tape compression/distortion, as well as the Steiner-Parker's low pass and the second channel of Tallin.

After the signal gets tapeified, it gets sent to the D0 which acts sort of like two additional playback heads. Since the D0 doesn't resample, changing the delay time sounds more like what you would get from sliding a tape head to a new position than changing tape speed. Of course it's just an additional delay of the signal already delayed by the RLL, but the end result sounds basically the same as multiple heads placed along a single tape.

The matrix mixer takes up a lot of hp but it's absolutely worth the space. It makes signal flow decisions a breeze and it's great for performance. I really like it for choosing a nice stereo mix of all the different inputs, too.

The Hikari mixer/attenuator is mainly there for Batumi.

If you're curious to hear some things, I'll be keeping a Soundcloud playlist of clips I like from this system as I work with it.

I'd worked out how to do the moveable tape head thing with the delays (came to me in the shower - go figure) but the rest would have taken me forever.

The sample track made me smile. An elegant patch. I reckon I'm going to have lots of fun approximating it.

There's a couple of big threads in the Euro section about this:

I used this case with my band for a couple of years around 2012. Great little monosynth with 3x VCOs, 2x VCAs, a mixer, a filter, multiple mults, 4x attenuators, delay, a headphone/line out, a ribbon controller and even a lamp! all in 84HP 4U. Sometimes miss this creativity I could get from this restricted setup, though I can get many more complex timbres and expressions these days with my current 9U In this case the thread is about the patch rather than the format. By request from yours truly.

Here's a first attempt using a pair of Distings and Morphage. I'm thinking WIBBI the two heads could play different parts of the loop...

Yeah, that's what I mean by the two extra play-heads being more of a concept than how the patch is actually working. It's a similar effect but really just serial delays.

I wonder how different the patch would sound differently if you patched it in reverse, hitting the two distings first and then the Morphagene. That way at least the separate delay signals are getting mixed in at different points in time while the Morphagene is being modulation, so they'll each have slight differences in their loops.
Top

I'm finding the Morphagene always wants to steal the show.

Which is fine, I guess. Like much of this kind of stuff results depend in large part on the quality of your inputs, and I've been a bit scattergun in my choice of loops.

However it has encouraged me in this weekend's project of treating my Distings like each half of a DLD. That's been much more successful.

Meditate on this patch some more I shall...

I want to play the game! 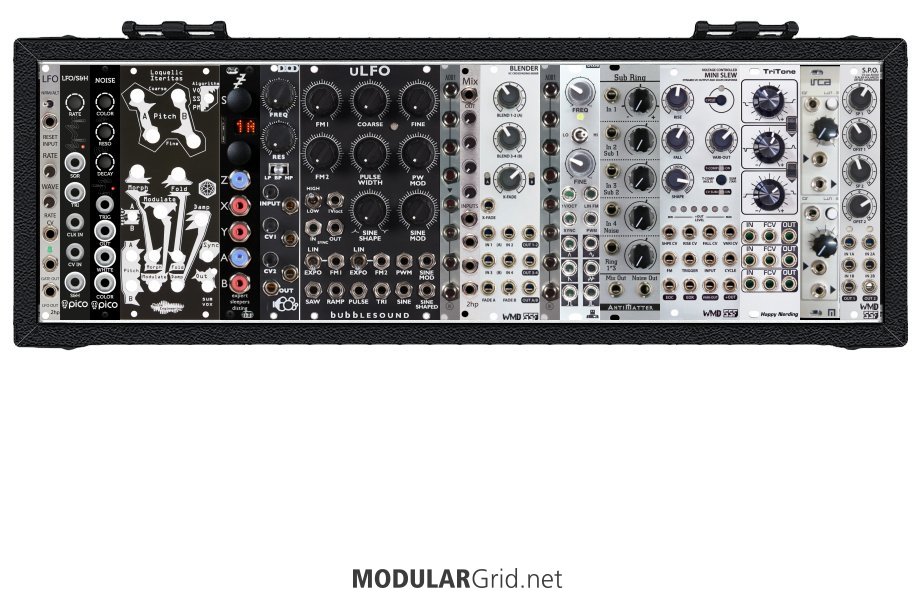 Nice little system. I've always been curious about the Sub Ring--how do you tend to use it in this setup?
Top

Buttons ARE toys wrote:Nice little system. I've always been curious about the Sub Ring--how do you tend to use it in this setup?

this is a proposed system. I buy and sell modules a lot. sometimes I DIY and sell them off when I need money. going forward I will probably be doing less DIY and more buying dense modules to fit in a small travel 6U.

the subring has a DC mixer, offset, white noise, ring mod, clock divider, sub oscillator. I don't think I would want a DC mixer that only does DC mixer. this gives more flexibility and more density. it also has less patch cable to do the same thing. you can mix in some noise by turning a knob. mix in ring mod, mix in the sub oscillator. easy, quick, dense.
WWW.EATYOURGUITAR.COM <---- MY DIY STUFF
Top

Really cool to see small systems. I thought, go big or go home... but I may even get a second system for digital stuff :-)
Top

SpecimanX wrote:Really cool to see small systems. I thought, go big or go home... but I may even get a second system for digital stuff :-)

What I like about having a small system is that you can really focus on getting the most out of a small handful of functions, and it can put me into a more creative headspace than if I'm sitting in front of my full system where most things I need are just a slightly longer patch cable away. It feels more like working with a stand-alone instrument than a toy box of endless options, so I spend less time thinking of what to do and more time doing it.
Top

cptnal wrote:In this case the thread is about the patch rather than the format. By request from yours truly.

Unless this thread gets some non-euro examples, I'll move it over to euro soon.
flickr cloud of sound touyube NOT A MODERATOR ANYMORE
Top These are twin 6Ux60hp cases. The original idea was to use them as satellite
cases along side a main larger hp case. Basically, one would serve as the main
input for the system, the other for mixing and output. That hasn't changed,
aside from the fact that I really like this format and may decide to go with
more of them as opposed to using a central main case. They are super deep
@ 120 mm internal depth and stack very nicely, made from Oak for weight
and hardness.

Of course they facilitate specialized grouping and PSU isolation as well. I am
liking the idea of using even smaller cases for satellites to these, maybe some
nice 42hp versions

sduck wrote: Unless this thread gets some non-euro examples,...

I´d love to see some of those they must be out there.
He who eats with most pleasure is he who least requires sauce.
Xenophon
Top

The current configuration of my Make Noise skiff:

I am currently sequencing this with an Arturia Keystep to explore the possibilities of using multiple arpeggios and sequences via MIDI and CV. Eventually I will integrate my Novation Circuit into the system as well via a MIDI merge box so that I can get 2 more melodic sequencers and 4 drum trigger/tracks.
Current rack: https://www.modulargrid.net/e/racks/view/736172

I like to imagine small systems. If I had an extra $3,000 lying around, I might build this one. The META can be a Drum, Wavetable VCO, LFO, EG, or Sequence generator, all with included VCA. pugix wrote:I like to imagine small systems. If I had an extra $3,000 lying around, I might build this one. The META can be a Drum, Wavetable VCO, LFO, EG, or Sequence generator, all with included VCA.

That looks like a fun little machine.
Current rack: https://www.modulargrid.net/e/racks/view/736172

Stop the presses! Adding a non-Euro photo of my Modcan mini-system in order to keep this thread in the General Discussion index!

Basically use the Quad LFO to generate complex waveforms that I feed into both CV Recorders so I can manipulate the speed, direction and edit the IN and OUT points on the fly. Since the Recorder has four channels, I feed out three of them each to the Audio Mixer and then direct each of the two mixer outputs into two separate Filters for further manipulation. Finally, into the Dual Frequency Shifter before it gets output to something like an Eventide SPACE where it gets completely warped into something else entirely.

I've done one or two shows with this set-up and it generates a lot of very interesting sounds. I refer to it as the BBC Radiophonic System if that helps give a better idea of the kind of brain-bending sounds it creates.

Okay, now back to all the fantastic Euro systems the rest of you folks have been posting here!

(Hey, where the heck is JLR? I figure he must have something wild to post in this thread!)

Scooter McCrae wrote:Stop the presses! Adding a non-Euro photo of my Modcan mini-system in order to keep this thread in the General Discussion index!

Great looking system. I'd love to hear some stuff from it. I've always been curios to hear what those Modcan CV Recorders can do with audio!
Top

Here's my suitcase of lunchboxes! which has been to a few AHNE meets. Generally it's a Little Boy Blue, a Frostwave Resonator, a few LFO/AR's, VCAs, noise, attenuators etc. and a MFOS Weird Sound Generator. jkjelec wrote:Here's my suitcase of lunchboxes! which has been to a few AHNE meets. Generally it's a Little Boy Blue, a Frostwave Resonator, a few LFO/AR's, VCAs, noise, attenuators etc. and a MFOS Weird Sound Generator.

So fun, jkjelec. I bet you got a thrill seeing this thread, knowing you could post the most literal reply ever.

The jacks in Bert and Ernies' eyes are perfection.
★ starthief.bandcamp.com ★ starthief.net ★ ModularGrid: 12U 144HP, Pod 60 ★
Top

Nice work, can't believe they made a lunchbox for Family Affair!
The only thing that stays the same is change
Top

Those are the first "found enclosure" builds I've seen that I wanted!

Soo much better than stuffing it in a doll's head or badger taxidermy. Nice job!
Top
Post Reply
33 posts