You're looking at a 606 (left), 303 (right), PAIA Master Controller (middle) and various mods to make it useful during performance.

- The 6 individual outs of the 606 are the white row at top left
- Below these outputs are 3 3-way toggle switches that swap neighbors or mute them (re-routing by switch).
- The CV inputs to drum voices are in blue above each Joystick (voice).
- The Joysticks control the drums Pitch (vertical) and Time (horizontal).
- The Pushbuttons below the Joysticks control various modes of the drums and muting of the CV inputs.

At left, middle and right, we have 45 degree angled yellow and brown banana ladders with a silver knobbed pot next to each step (6 steps tall).

The left one of these ladders is the internal audio paths for the drum circuits. You can patch in external sources to each drum here and crossfade. You can also extract the raw oscillator or feedback system from these points and use it with another drum, thus interconnecting the drums for unusual percussive noise. The reason for this feature is that during performance often a drum sound needs to be morphed but you can't simply pull it out and patch it somewhere else, also processing after the vca is less interesting sounding. Playing with the feedback path directly brings more flavor.

For example, with this bassdrum we can patch the core oscillating circuit out to a wavefolder and back. Then by controlling the pot we can sweep between the normal bassdrum and a woodblock. A comparator might give us a faux digital bit reduced kick. Etc.

Moving on. The second vertical 6 step ladder in the middle of the machine is for trigger inputs, outputs and again crossfading between internal and external. This is important for mixing up sequences. Eventually these will be push pull pots so I can mute the instruments directly... The 606 is primitive but it's failings can be worked around. OTOH, I like the simple sequencer because it encourages me to focus on playing the system and not waste time programming complicated patterns that force me to "follow along" rather than actively navigate the sonic terrain. If I need flam, I patch out to a DUSG or some trigger delay and bring the triggers back to the drum.

The rightmost ladder is for accessing the 303 and jack'n new CVs for pitch, gate and other devilfish stuffs. No reason to detail it, boring but useful.

In the middle above the 303 we have 2 joysticks for controlling multiple 303 modifications simultaneously and pushbuttons for some sequencer hacks. This panel can be swapped out in case I want different features in the future.

In the very middle of the machine starting at the base, we have 2 toggles and 4 pushbuttons (2 momentary, 2 latching). The toggles control the timing mode and master play/stop. The Pushbuttons control the 606 and 303 individually, allowing you to pause one machine selectively and drop it in on any beat (momentary) or stop playback altogether (latching). It's amazing how much life I get out of this simple feature.

The 3 big knobs in the middle of the machine are related to tempo-fine tune, tempo and shuffle mode. The fine tune is a 10 turn pot. I should change it to a 3 turn because it's too many rotations for quick beat-matching with a DJ.

The 7x4 pushbutton timing matrix has direct access to the clock divisions at the right of each row and these end up exiting at the top.

The 4x4 matrixes are unity gain summing mixers that route to a db25 which provides (8in, 8out) connectivity to a Metric Halo Interface. These matrixes can be used standalone, with the interface connected, or at the same time.

The row of 6 inputs at the top middle (black) are summing inputs to a cue-mix. The cuemix headphone jack is on the front left at the angled corner... It's a primitive setup but works fine.

That's most of Archetype 1. The 606, 303 and PAIA Master Controller 6770 are hacked to support what you see. There are 3 power regulation boards to keep the grounds proper and lots of shielded wire.

I think its really important to share that by the time Archetype 1 was built I had developed new interface design ideas and patching philosophies.

However, combined with my modular this box is a very solid performer
so I'm busy working on records and keen to understand other peoples ideas so we can synthesize the future.

Don't forget, photos with enough pixels to make out the text and layout go directly to the VIP room. No vanity here. It's all forensics.

fuck
magic from space
behind you
Top

richard wrote:
"we just need some mutlinational to grab the copyrights over the sine wave and we are all fucked"
Top

here is my performance rig 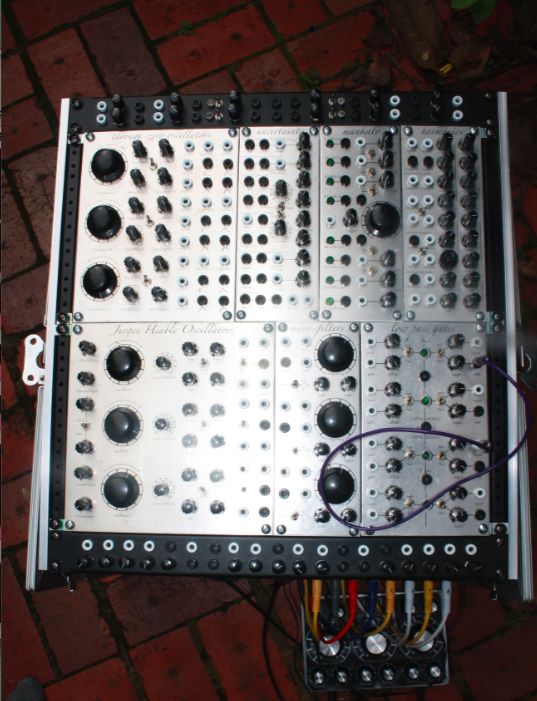 this was from my debut gig at rainbow serpent festival in the alex grey room - it was on the drone tip as you can tell from all the filters and oscs.

The modules change around a bit. The last gig i played used more envelopes to trigger sound pulses, the VCS was a good event organiser since you can react to events and create delayed events.
Top

Nice! Envious of your last gig, the amount of open minds in that room must of been... above average?

Did you get a solid recording?
Top

the cosm tent was fab - great peeps at all times. i have to thank scott (spbaker) for the opportunity to play there - it was a great place to have my first ever live performance. i must admit my output wasnt so great at that one.

a later performance has sound (and video if scott gets some time to cut it up). i can't link to it at the mo as im at work and media sites are banned but i have it posted on my blog.

Holy Mother of Fuck! You guys are awesome!

I have half a dozen different diy modulars for gigs, usually bring along 2-3.
This is a typical setup - pinky, tube synth, librarySerge

I've got to work on my 'look' though......cape or lab coat? just can't decide
You do not have the required permissions to view the files attached to this post.
nonlinearcircuits PCBs IN STOCK
nonlinearcircuits builders guild on FB

wow geilst as we say in germany...i am impressed. these machines look like pure fun , so great
Top It's (currently) organized into two voices:
- the rene driving the anti & afg, filtered through the qmmq and vca'd with the borg, into the matrix mixer where I add effects with some pedals.
- the pp, quantized by the uscale, driving the ulfo; the sine out going into the wavefolder and the triangle driving the piston; filtered through the plague bearer and the qmmq, vca'd by the moddemix.
- the first two clockwork channels drive the x and y inputs of the renee, and the third drives the brains. A schlagzwerg serves percussion duties, as well as resetting the sequencers once a bar to keep things in sync.
- the maths serves as AR envelopes, modulating both the vcas and the filters, the first channel driven by the sum of the rene's x and y outputs, and the other by the ustep, which is set to the same clock as the brains.
Top

Here are two pictures of various DIY performance rigs. The first is my giant cabinet in 1/4" format, with some rack space for a mixer and reverb unit... this case proved too unwieldy to transport! So I moved to banana format, new panels, and the two boxes you see in the second picture shortly afterwards. Were these newer boxes at the Meeting of the Knobs a few years back? I think I recognize them.

How much of the video processing modules are you incorporating live now?
Bandcamp, soundcloud, videos
Top

Were these newer boxes at the Meeting of the Knobs a few years back? I think I recognize them.

How much of the video processing modules are you incorporating live now?

I actually have been doing video synthesis only for the past year as far as live events go. I have lots of ideas for an integrated performance setup, but not sure when I'll have time to put it together in the near future anyway. The Midibox SEQ4 (pictured here in front of the cabinet on the left) has 8 CV outs which can flexibly send out sequence CVs or tempo-locked LFOs. Since I have a separate MIDI to CV for my audio cabinets I may use the SEQ4's CV outs as 8 CV channels to the video rig. It will be very easy to do phase-related LFOs which are great for video. And modulation locked to a beat always works very effectively for video animation.
LZX Industries | http://www.lzxindustries.net
Top

Luka wrote:here is my performance rig

this was from my debut gig at rainbow serpent festival in the alex grey room - it was on the drone tip as you can tell from all the filters and oscs.

The modules change around a bit. The last gig i played used more envelopes to trigger sound pulses, the VCS was a good event organiser since you can react to events and create delayed events.

Mr. Bisset, that is the best thing I have ever seen.

When I got sent this link today, I was like EXCUSE ME WHILE I CHANGE MY PANTS.
bsmith: it would be awesome to see people with lots of euro give them pokemon values and do battle