These were only built for a short time (~1981), probably didn't sell too well, are kinda scarce as a result.

...and this one had seen better days!

For those who don't already know if it, this isn't like most of those stomp-box synths (Electro Harmonix Micro, Boss SYB-5, etc..) that are basically octave/fuzz boxes with filters. This one is actually a real analog synthesizer, based on some of the same circuitry used in Korg's venerable MS models. It's designed to track note-on/note-off and derive the pitch of an input signal (guitar, bass, mic, another synth, whatever...), trigger its internal oscillators, and match the pitch of the notes you are playing. It has built in distortion as well, and many of the synth functions you would expect - envelope generators, glide, adjustable touch sensitive dynamics, a resonant low-pass filter, and a couple of oscillators. You can blend in your dry or distorted signal with the synth sounds as well.

That's a lot of "stuff" stuffed into a small package!

This one came to me (relatively) cheap, as it was busted. It was one of those great Ebay auctions where the guy is selling stuff like old handbags, troll dolls, Korg X-911, hair scrunchies... He didn't know if/how it worked, but guaranteed that "it would make weird noises"!

And that it does!

One of the pots was broken and seized up, it wouldn't trigger properly (bad 4011 NAND gate in the trigger stage), and an LED was shattered/burned out. I found a schematic online, sorted everything out, and now it works like a champ! I still need to tweak its "intonation" a bit. There are a number of trimpots inside that have influence over this. Adjusting them to track pitch properly seems like more of an art than a science (that's what I was working on in that pic above).

That said, I'm *really* blown away by it's tracking ability! I have a late model Roland guitar synth setup too, and being that this old Korg doesn't even have a dedicated/specialized pickup or anything, it does a *very* respectable job tracking notes.

I was jamming with it a bit last weekend, and ending up recording a little improv song thing to demonstrate some of the sounds it can make. All the synth parts in this demo were made by the Korg, and "played" using an Alembic Distillate bass (and a SG Special on those "bubbly", slow-attack sounds in the middle). Those crazy blips at the beginning are from string noise made by sliding my hand gently over all four strings - causing the Korg to freak out. There's some normal bass in the middle, which is from the Distillate as well.

I used a compressor to smash the input signals a bit, to help even out the dynamics so the Korg could do its best job possible with tracking. I then ran the Korg into the Space Echo, and then thru an old Alembic F2-B preamp. Here are some shots of the setup:

Oh yeah- and the song:

that's really cool man. i'll be sure to check the demo soon.
Self expression is as essential as breathing
kwotemusic.com
my other sites
Top

One of the local shops had one in over the weekend, didn't stay in stock long enough for me to even consider it.
website ♦ bandcamp ♦ soundcloud
Top

Awesome, nice find (and repair job)! Those are super cool, I've wanted for a while, but as you said, they are fairly rare.

I was skeptical on the tracking too, but it sounds like it works very well.
dress yourself for the public. you now must exit your home and acquire a dental mirror and lubrication!
i recommend a hat, or a helmet. if a helmet, ensure that it is both convincing and unbiased. -citizen mori
https://www.modulargrid.net/e/racks/view/78959
https://www.modulargrid.net/e/racks/view/225002
https://jimdrones.bandcamp.com
Top

You always have interesting posts, great demo too!
I would love to play with one of those!
Top

I didn't try it on this recording, but I'm thinking that it will be fun to experiment with bouncing tracks thru the 911 - have it double the source track, and manipulate it in real time as it follows along (or attempts to - the sound of which might also be a desirable outcome!). Endless possibilities!

Ever the archaic guitar-synth nut, I now have an old Maestro W-2 "Sounds for Woodwinds" incoming. That's falls more into the pseudo-synth realm - fuzztone, tremolo, octave, filter multi-effects-type box. I've been looking forward to that one, though. Wonder what a drum track will sound like thru it??

...or I can just plug in the upright - Melvin Jackson style! 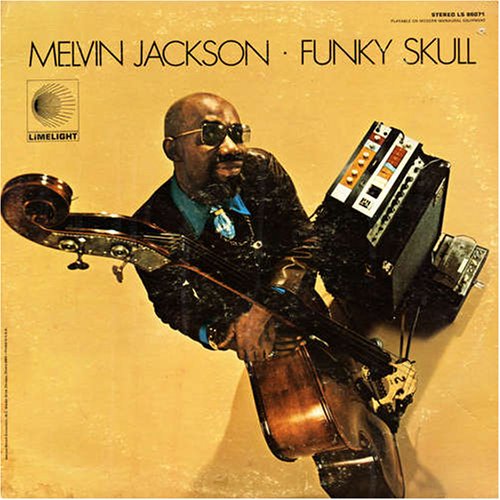 I now have an old Maestro W-2 "Sounds for Woodwinds" incoming. That's falls more into the pseudo-synth realm - fuzztone, tremolo, octave, filter multi-effects-type box. I've been looking forward to that one, though. Wonder what a drum track will sound like thru it??

Hello
My name is Micha Volders and I'm a anolg synth enthousiast/musician
Great Job repairing that X911!
I recently acquired a x911 myself , but the pitch tracking is not working, Now I'm little technical myself and after trying everything, including feeding it CV/gate from my MS10 (with worked beautifully) It still couldnt pick up the pitch from an audio signal (Frequency to volt/hz conversion) though it does trigger the vca envolope at one pitch/note only all the time when I feed it a signal......SO I opened it up, and discovered this big brown flat capacitor wich had some nasty slimey goo underneath it, so I thought or It's glue or it's leakage from the cap...When I touched one leg with a little screwdriver it changed and filpped around the pitch....Could this simply be the problem , by just replacing the cap?
Any help would greatly be appreciated !

Impossible to say. Do you have a photo? It is probably a good idea to go in and replace all of the electrolytic capacitors at this point and the calibrate the machine.
Top

chromium
hey have you figured out what each of the trim pots does on the bottom of the x911.
love to find a filter resonance adjustment!!

just got one of these and don't want to disrupt that tracking you talked about being a fine balance!!!
Top

lewis wrote:chromium
hey have you figured out what each of the trim pots does on the bottom of the x911.
love to find a filter resonance adjustment!!

just got one of these and don't want to disrupt that tracking you talked about being a fine balance!!!

Welcome, and yes I did know my way around that thing pretty well for a while there. PM me your email address, and I'll send you some PDFs that will map everything out.

@Pigsnoot - how'd your's work out? I didn't see your post here, but we corresponded a bit offline after it - so hopefully you were able to get up and running.
Top

What a great find!
Sounds better then some of the new stuff available.
Top

could this be a dead filter chip?

does the synthe section have its own VCO?

if any one can help thanks

any chance of those PDFs

Snufkin- just saw your post. Shoot me an email at the link in my profile, and I'll forward you the PDFs (zipfile) of all the schematics. It details all the sub-sections. The problem with mine was the same old dead CMOS proplem I've had with lots of other gear. Best to blow thru there and replace all of that while you're in, IMO. Can't say that is causing the problem you described, but just something to keep in mind while you are in the mode of repairing it. We can talk more in email, and I'm happy to try and help you identify your problem.

@Morley - your video is partly what inspired me to pick up this unit. Thank you for taking time to share all those demos. Its a wonderful experience to see all those venerable music machines in action!

I also sold my X-911 when I bought sandyb's old 5U system, and I miss it as well. I bought an Asys RS35 hoping it might provide some of what made that old Korg fun, but still need to port it to 5U or build a small euro system (leaning towards the latter now - funny how that happens